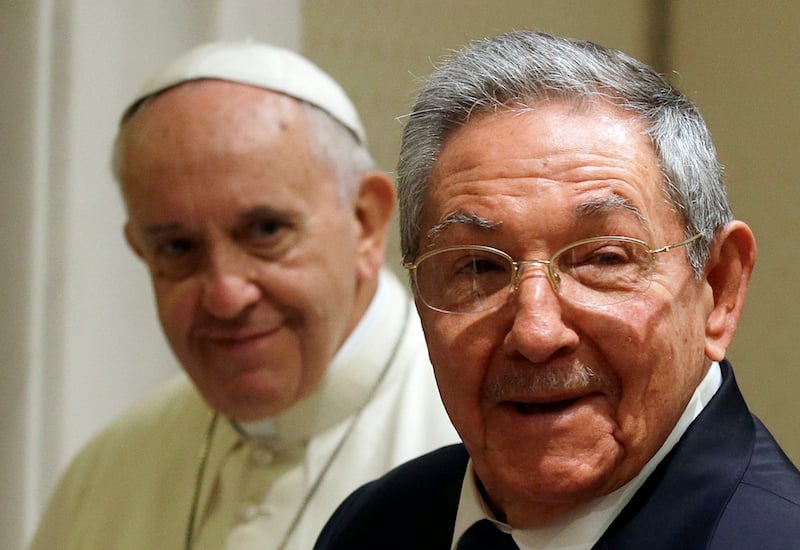 Cuban President Raul Castro, right, smiles as he meets Pope Francis during a private audience at the Vatican May 10, 2015. Photo courtesy of REUTERS/Gregorio Borgia/pool
May 10, 2015
Reuters 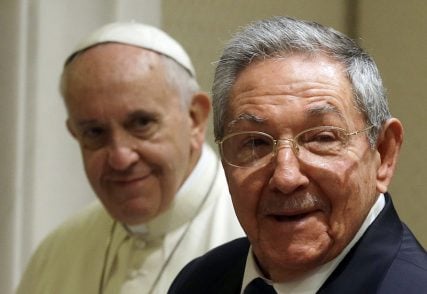 Cuban President Raul Castro (R) smiles as he meets Pope Francis during a private audience at the Vatican May 10, 2015. REUTERS/Gregorio Borgia/pool

VATICAN CITY, May 10 (Reuters) - Cuban President Raul Castro thanked Pope Francis on Sunday for brokering the thaw between Havana and Washington and said the pope so impressed him that he might return to the Catholic Church, despite being a communist.

The 83-year-old younger brother of Cuba's revolutionary leader Fidel spoke with the Argentine-born pope for nearly an hour - unusually long for a papal meeting - during a meeting the Vatican said was strictly private and not a state visit.

Papal audiences on Sundays are extremely rare. Francis made an exception when Castro asked if he could stop in Rome on his way back from Moscow to thank Francis for the Vatican mediation between the United States and Cuba, Cuban officials said.

Leaving the meeting, Castro told reporters that he thanked the pope for the Vatican's contribution to December's historic resumption of diplomatic relations between the former foes after more than half a century of antagonism.

Later, at a news conference with Italian Prime Minister Matteo Renzi, Castro said he came out of the meeting with the pope "really impressed by his wisdom and his modesty".

"When the pope comes to Cuba in September, I promise to go to all his Masses and I will be happy to do so," he said, adding that he reads all of the speeches of Latin America's first pope, who has made defense of the poor a major plank of his papacy.

"I told the prime minister if the pope continues to talk as he does, sooner or later I will start praying again and return to the Catholic Church, and I am not kidding," he said.

Both of the Castro brothers were baptized as Catholics.

Francis, who is due to visit both Cuba and the United States in September, is a member of the Jesuit religious order. Castro joked that "even I am a Jesuit in a certain sense" because he was educated by the Jesuits before the 1959 revolution.

The Church's activities were suppressed for decades after the revolution. The government began loosening restrictions in the early 1990s. After the late Pope John Paul visited in 1998, Fidel Castro re-instated Christmas as a holiday.

The pope's U.S. trip had been planned for some time before the Vatican announced last month that Francis would stop in Cuba on his way to Washington.

It will be the pope's first visit to both countries as pontiff. His predecessors John Paul II and Benedict XVI, visited Cuba and met Fidel Castro.

Castro also said he was looking forward to Cuba being removed from the U.S. list of state sponsors of terrorism, due to take place at the end of this month, saying "We really should never have been on that list."

Cuba was slowly "trying to move forward with perfecting our political, cultural and economic system," he said, adding that it was "difficult because we do not want to take measures that hurt our people. We don't want any shock measures. We don't want anyone to be left on the streets."