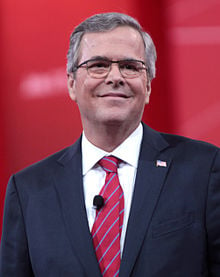 Jeb Bush speaking at CPAC in 2015, by Gage Skidmore

Jeb Bush gave a good commencement speech at Liberty University over the weekend -- not that anyone liked it much. The degree recipients and their families sat on their hands through most of his applause lines, and among liberal commentators he got just a bit of grudging recognition for steering clear of same-sex marriage.

Bush's non-boilerplate theme was Christian commitment in today's world, but most of what he had to say was a far cry from the kind of witness Liberty is known for. The lines that fell flat included:

Whatever the need, the affliction, or the injustice, there is no more powerful or liberating influence on this earth than the Christian conscience in action.

Outside these seven thousand acres of shared conviction, it’s a depressing fact that when some people think of Christianity and of Judeo-Christian values, they think of something static, narrow, and outdated. We can take this as unfair criticism, as it typically is, or we can take it as further challenge to show in our lives the most dynamic, inclusive, and joyful message that ever came into the world.

Offhand, I cannot think of any more subversive moral idea ever loosed on the world than “the last shall be first, and the first last."

Likewise, is it really just some time-worn, pre-modern idea that God’s favor is upon the gentle, the kind, and the poor in spirit?

For all who would serve the poor and homeless, you set the standard with your belief that everyone matters, and everyone has the right to rise.

Men and women of your generation are striving to be protectors of creation, instead of just users, good shepherds instead of just hirelings – and that moral vision can make all the difference.

Fighting injustice, helping the least among us, joy, inclusivity, loving your enemies, environmentalism -- maybe that shouldn't be a surprise, coming from an Episcopalian-turned-Catholic in the era of Pope Francis. Actually, Bush mentioned both Francises, saint and pope, and there was no applause for them either.

To be sure, he did get around to throwing some red meat -- well, more like medium rare -- to the crowd: on "choosing life," defending the Jews and the Constitution's "first freedom," attacking federal authorities in general and "the present administration" in particular for ignoring religious conscience. But then he sounded a lot like President Obama in standing against the culture-war divisions that Liberty's founder, Jerry Falwell, did so much to create:

In my experience, at least, you generally find the same good instincts, fair-mindedness, and easygoing spirit among Americans of every type – including, of course, the many who belong to no church at all. That’s a lot to work with, if the aim is to accept differences instead of exploiting them, and get on with life in this free country.

Consider Mike Huckabee, who visited Liberty in January to talk about the divide between "Bubbaville" and "Bubbleville,"and says that we're "moving rapidly toward the criminalization of Christianity.” Or Ted Cruz, who in March stirred the passions of a Liberty audience with lines like: "Today, roughly half of born again Christians aren’t voting. They’re staying home. Imagine instead millions of people of faith all across America coming out to the polls and voting our values."

Bush visited liberty to deliver a very different message. It's too bad no one beyond those seven thousand acres of shared conviction registered it.