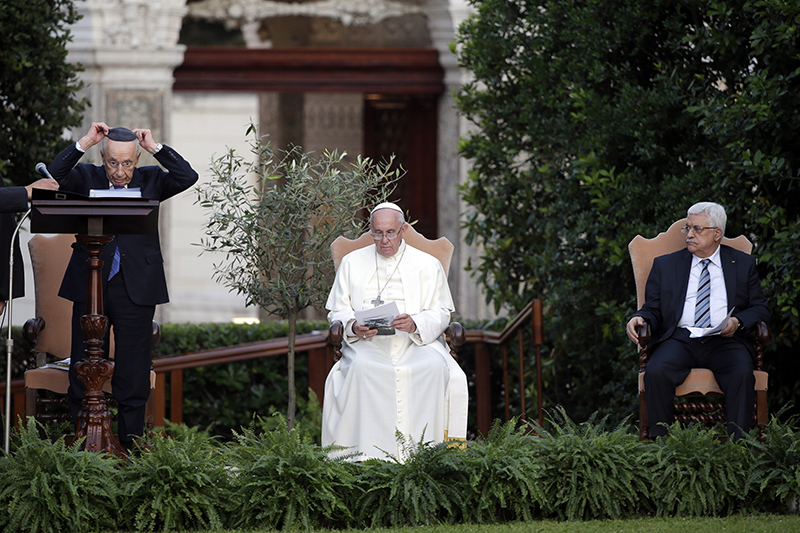 Israeli President Shimon Peres puts on a kippah before speaking next to Pope Francis and Palestinian President Mahmoud Abbas, far right, in the Vatican Gardens at the Vatican on June 8, 2014. Photo courtesy of REUTERS/Max Rossi
*Editors: This photo may only be republished with RNS-VATICAN-PALESTINE, originally transmitted on May 13, 2015.

JERUSALEM (RNS) The Vatican’s decision to recognize the state of Palestine in a treaty on Wednesday (May 13)  angered Israeli officials.

The move comes four days before the first-ever canonization of two Palestinian nuns and it solidifies the standing of Palestinian President Mahmoud Abbas, who is scheduled to meet with Pope Francis at the Vatican on Saturday.

Israeli Foreign Ministry spokesman Emmanuel Nahshon told The Times of Israel that the government is “disappointed by the decision. We believe that such a decision is not conducive to bringing the Palestinians back to the negotiating table.”

Israel insists that for the Palestinians to achieve statehood, they must first end their armed struggle against Israel and recognize its right to exist as the homeland of the Jewish people.

Although the treaty codifies the Holy See’s relations with the Palestinian Authority, the Vatican has already referred to the “State of Palestine” in some official documents, including the official program handed out during Pope Francis’ Holy Land pilgrimage last year.

In recent years, the Vatican has stepped up its efforts to support Palestinian Christians in East Jerusalem, the West Bank and Gaza as their numbers have dwindled due to emigration spurred by wars and economic hardships.

A majority of Christians in the Holy Land — including Israel — are either ethnic Palestinians or live alongside them in the same towns and villages. Sisters Maria Baouardy and Mary Alphonsine Danil Ghattas, who were both Christian Arabs, are due to be canonized by Pope Francis on Sunday.

William Shomali, the auxiliary bishop of the Latin Patriarchate of Jerusalem, said the Vatican’s announcement “was not a surprise” because “the pope called President Abbas the president of the State of Palestine” during his 2014 pilgrimage to the Holy Land.

But David Harris, executive director of the AJC, the leading global Jewish advocacy organization, said the decision was “regrettable“ and “counterproductive to all who seek true peace between Israel and the Palestinians.”

“We are fully cognizant of the pope’s goodwill and desire to be a voice for peaceful coexistence, which is best served, we believe, by encouraging a resumption of Israeli-Palestinian peace talks, rather than unilateral gestures outside the framework of the negotiating table,” Harris concluded.

Abraham H. Foxman, national director of the Anti-Defamation League, said the action was “premature” and would “undermine the only real solution to the decades-old conflict, which is engaging in direct negotiations.”