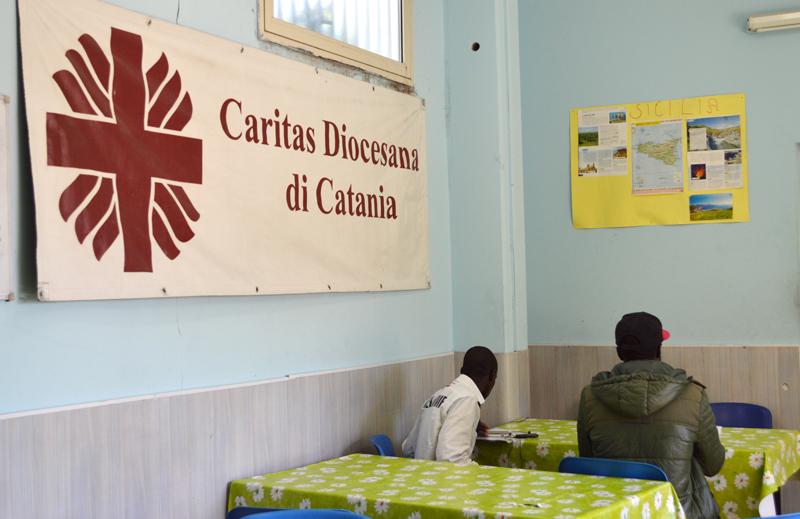 CATANIA, Italy (RNS) Sitting outside the central train station here in eastern Sicily, a 16-year-old who would only give his name as “Simon” hunched his knees up to his chest and wrapped himself up into a ball. With little spoken English, the teenager from Eritrea has taken to miming the way he traveled across the Mediterranean.

He was one of around 325 migrants crammed into an overcrowded boat that left Libya earlier this month, only to lose power a few hours into the journey.

“For six hours we floated on top of the sea,” he said, explaining how he was kept below deck until being rescued by the Italian navy. Having been stored like cargo by people smugglers, Simon had become sick and was swiftly treated by a doctor.

He was first taken to the island of Lampedusa, Italy’s southernmost point, which Pope Francis chose in 2013 for his first official trip outside Rome. During the visit, the pontiff tossed a wreath into the sea to commemorate the untold number of migrants who had lost their lives en route to Europe.

Nearly two years later, an estimated 750 migrants died last month in a single shipwreck. Simon and his fellow passengers all survived the dangerous crossing, which has become the world’s most dangerous migrant route.

So far this year, an estimated 34,000 people are thought to have arrived in Italy by sea; this week alone, rescuers saved hundreds more.  A handful find their way to a center set up by Caritas, the international Catholic charity, in the shadow of Catania’s central train station.

After arriving in the city three days ago, Simon found his way to the center, along with other Eritreans. The group had met in Sudan, where Simon says he spent four months before embarking on a weeklong journey to Libya. 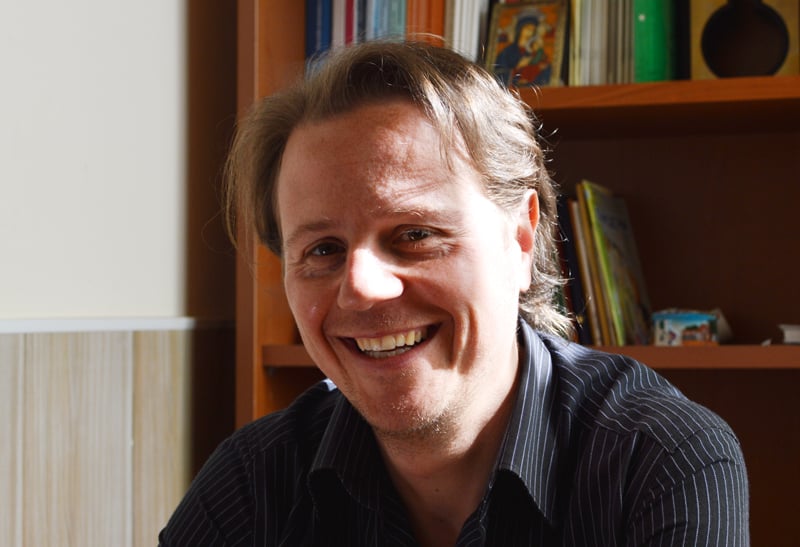 The friends have joined the stream of migrants who pass through the Sicilian city before continuing their journey to northern Europe. Almost all the migrants who visit the Caritas center have avoided being identified by Italian authorities; European Union laws would make them unable to cross borders if they were identified.

Despite the help given by the Italian navy and medics, Simon said he ran away from the authorities to avoid being fingerprinted. Finding himself on an Italian register of asylum-seekers would hinder his journey to Germany, via Milan, where his brother awaits.

Filippo Cannizzo, spokesman for Caritas, said the Catania center has become a “place of transit” in recent months. First opened in 2007 to offer food and advice to people living in extreme poverty, the center has welcomed an increasing number of migrants from African countries.

Most have just arrived and sleep on the streets, taking refuge in the center during the morning and early evening.

Although thousands of Syrians have fled their country’s bloody civil war across the Mediterranean, Cannizzo said none seek Caritas’ help. “Probably because they have more economic resources, and they’re well-organized in the region,” he explained.

Eritrean migrants such as Simon say they paid $4,000 each for the journey to Europe, and Cannizzo said those from the east African country are the worst off when they arrive in Catania.

All those who pass through the center are offered breakfast and dinner by a small army of Caritas volunteers. The words of the pope, who since his Lampedusa visit has repeatedly highlighted the plight of migrants, have further boosted Sicilians’ willingness to help.

“There’s certainly been an impact on the volunteers. As a city, Catania has responded with solidarity. Even in a city where there’s no work, there’s a high level of criminality, in addition to the problems of the migrants,” Cannizzo said. 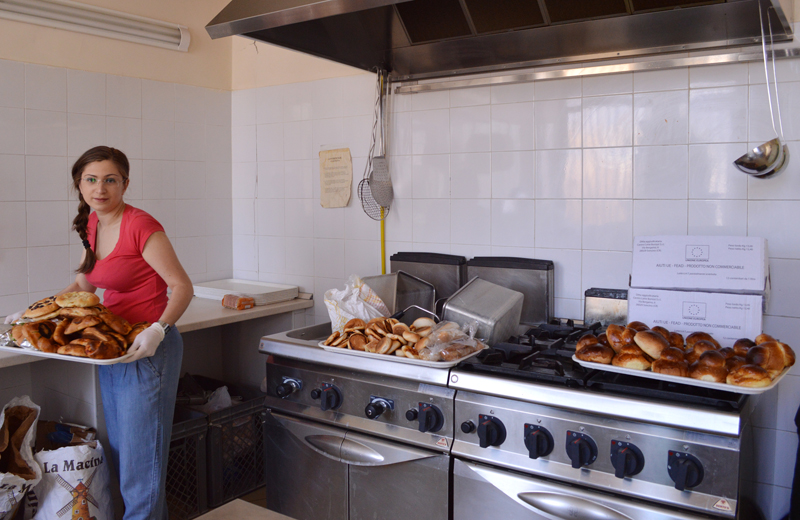 The proof is on the table, where pastries donated by 14 local bakeries are piled high. “In this period of crisis, a lot of people have given donations. The entire food network here is from donations,” said Cannizzo, adding that there are also clothes given for migrants and poor Italians.

Last month, Francis met Italian President Sergio Mattarella and thanked him for the country’s commitment to welcoming migrants. But Italy is stretched nearly to the breaking point in dealing with the high number of new arrivals, with immigration centers long since full.

Other buildings across Sicily and elsewhere have been used to house migrants, with organizations such as Caritas seeking to offer additional support.

Despite the Christian ethos that governs Caritas, Cannizzo is firm in saying there is no Catholic agenda. There is no need for volunteers to be religious, while the cooks are careful to prepare food in accordance with others’ beliefs.

“On Sundays we hold Mass; whoever wants to come can, but there’s absolute freedom,” he said. But the pope’s words are not far from Cannizzo’s mind, as he remarks on Francis’ desire to create “a church for the poor.”