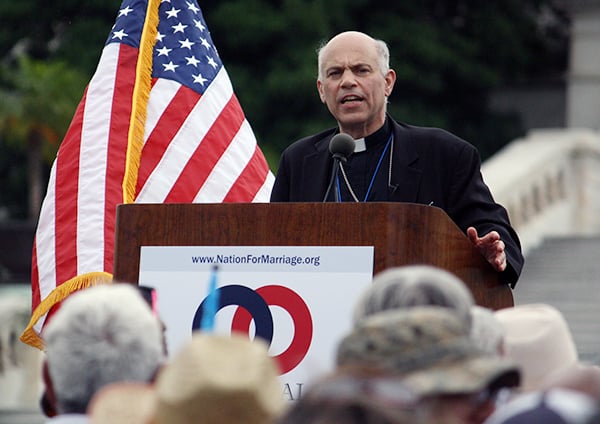 San Francisco’s Archbishop Salvatore Cordileone addressed the crowd at the 2014 March for Marriage rally on June 19 in Washington, D.C. He attended the event despite protests from more than 80 organizations who objected to his presence. RNS photo by Heather Adams
May 21, 2015
David Gibson

(RNS) The San Francisco priest who sparked controversy earlier this year by barring altar girls has been replaced as chaplain of the church’s Catholic grade school.

The Rev. Joseph Illo also made news in February when he gave students at Star of the Sea School a form to prepare them for confession, asking whether they had masturbated or advised anyone to have an abortion.

San Francisco’s Archbishop Salvatore Cordileone addressed the crowd at the 2014 March for Marriage rally on June 19 in Washington, D.C. He attended the event despite protests from more than 80 organizations who objected to his presence. RNS photo by Heather Adams

Illo later said the confession form was a mistake, but the controversies added to the clamor surrounding San Francisco Archbishop Salvatore Cordileone, an outspoken conservative and opponent of gay marriage who is embroiled in a dispute with teachers at several Catholic schools about morality clauses in a new handbook.

Illo’s removal as school chaplain was made quietly, appearing April 29 in a listing of personnel changes in the archdiocese that named the Rev. Vito Perrone as the new chaplain. Typically the pastor will serve as chaplain of a school that is attached to a parish, but another person can be designated for the role.

A conservative website, Catholic World Report, that supports Cordileone and Illo first reported the change and saw it as part of a campaign against both men.

Illo wrote in a letter to parents last week that he was still pastor at the church, saying that “indications thus far are that I will remain administrator of Star of the Sea Parish for the foreseeable future.”

Local media this week followed up on the story, citing a parent who was happy about the move and praised Perrone as “a wonderful human being and a wonderful spiritual teacher.”

Illo, meanwhile, appeared to be trying to quiet the waters.

An unapologetic culture warrior and lightning rod, he originally defended his boys-only altar server policy as “a poke in the eye of the liberal culture of San Francisco.” And last year, when he was assigned to San Francisco, he wrote a blog post saying he was about to enter the “beautiful but savagely distorted cultural maelstrom that is the ‘Baghdad by the Bay.’”

Last week, however, Illo’s letter to parents said, “I understand how important that it is that we develop a better working relationship moving forward.”

Speaking about the altar server controversy, he added: “I deeply regret the upset this issue has called us all.”