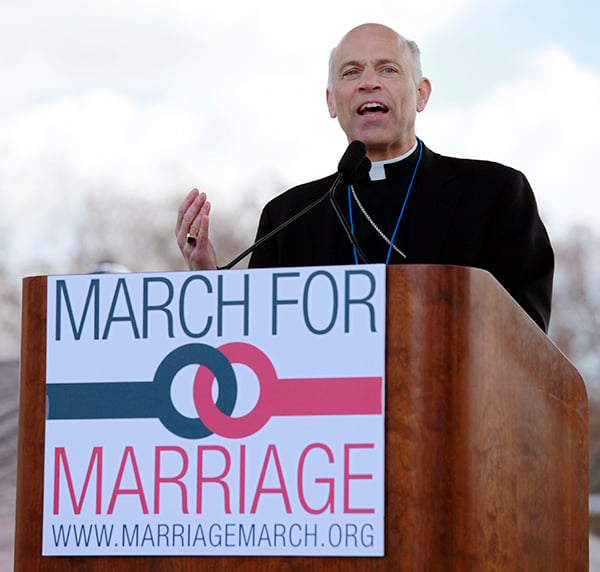 (RNS) San Francisco Archbishop Salvatore Cordileone has rejected criticism from state lawmakers over the use of morality clauses for Catholic schoolteachers, asking whether they would “hire a campaign manager who advocates policies contrary to those you stand for?”

The archdiocese sparked protests earlier this month when it unveiled morality clauses for four Catholic high school handbooks as well as for teacher labor contracts.

The language says that “administrators, faculty and staff of any faith or no faith are expected to arrange and conduct their lives so as not to visibly contradict, undermine or deny” church doctrine and practice on those topics.

Five members of the state Assembly and three state senators sent Cordileone a letter urging him to remove the clauses, which they said were discriminatory and divisive.

On Thursday (Feb. 19), Cordileone responded with a letter saying he is only asking for the same right they have in hiring.

“Would you hire a campaign manager who advocates policies contrary to those you stand for, and who shows disrespect for you and the Democratic Party in general?” Cordileone asked the lawmakers, according to The Associated Press.

The controversy is the latest in a series of periodic disputes around the country in which church or school employees have been fired because, for example, they get married in a same-sex wedding or become pregnant while unmarried or are found to have used fertility treatments barred by the church.

Issues surrounding sex and gender have been especially sensitive in San Francisco. The area has a large LGBT community and is a bastion of liberal politics, and Cordileone is the chief spokesman against gay marriage for the U.S. Conference of Catholic Bishops.

In addition, a San Francisco priest, the Rev. Joseph Illo, made headlines last month when it emerged that he is barring altar girls at his parish, Star of the Sea, because he said the practice discourages boys from becoming priests and can give girls the idea that they should be ordained.

Illo, who does not shy away from conservative positions, was in the news again this month for giving students at the local Catholic grade school pamphlets asking them about whether they had masturbated or had advised anyone to have an abortion, or had one themselves. The students were preparing for confession.

Illo apologized after parents complained, saying it was an “oversight” and he should have given the pamphlets to the parents, not children.

But the Rev. Jim McDermott, a columnist for America magazine, a national Jesuit weekly, said that hardly settled the issue. “(W)hy in God’s name is any place still presenting an examination of conscience in these terms?” McDermott asked.

“Truly, is it any less appalling to think that a parish might give adults this list of questions? Not because there aren’t sins in there ... but because of the sick, warped vision of church and confession that it offers.”