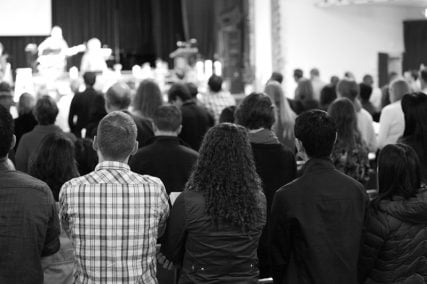 (RNS) Enough about churches that are dying. Let’s imagine something that lives, breathes, serves, makes a difference.

Would we even call it “church”? The term seems tattered and torn after two millennia of use. Maybe the term “faith community” would convey fewer historical negatives.

Whatever. Let’s not get hung up on names. Let’s imagine what it would actually be and do.

It would be God’s incarnate presence in human life. Not the only presence, but one that many people could enter into. Not so much an institution with structures, rules and layers of leadership, but rather a dynamic, ever-shifting community that gathered in various ways, ranging from small circles of friends to mass assemblies for special purposes.

It would look outward, unlike other human institutions that look inward. It would see people wanting to draw closer to God. It would see human needs such as grief and tragedy, hunger and hopelessness. It would see key moments in people’s lives, such as partnering and parenting. It would see the ways people hurt each other and the tendency of injustice to become systemic.

The community would have a bias toward action. Welcoming the stranger, providing care and food, supporting people in transition, working for justice. It would have as much organization as it needed for action and would resist the human temptation to concretize structure in order to allocate power.

This faith community would teach about God, not by formulating doctrines, but by telling the stories people are living with God. It would convey narrative, not law. It would draw on historic records such as Scripture, on more recent thinking and on discoveries being made in real time. It would encourage exploration and mutual respect, not right opinion and fighting. Because people are different, their words about God would be different.

The community would resist the normal human temptation to build facilities and to invest those facilities with unique character that might overshadow the people themselves. It would “travel light,” gathering wherever need and mission took it.

Credentials and training would matter far less than mutually recognized gifts of the Spirit. Though the world values power-based roles like leader, the faith community would value whatever ministries were needed at the moment, including leadership, but also including teaching, hospitality, prayer and discernment, as well as others. All would be valued.

Can you imagine all of this? It’s hard. We are accustomed to faith organizations that function more like worldly institutions, such as universities and banks. But something of this sort is how Jesus formed his first disciples. The key, I think, isn’t finding the perfect way of being and then formalizing it, but trusting God to show the way and remaining open and flexible to that way.

Much of the “dying” we worry about is the normal passing away of structures and ideas that no longer convey meaning. The

Imagining a faith community like this assumes an ability to start from scratch. That is no easy thing. Many are highly invested in maintaining what has been, not in seeking what could be. That number, however, gets smaller and smaller. Wise faith leaders — of all ages — will acknowledge the stress that occurs when the old passes away, but they won’t act to stop the passing away. Reinvigorating old ways isn’t a way forward.

News
In Oregon, churches and anti-fascists unite to provide mutual aid to fire evacuees and others in need
News
When churches reopen, don’t sing or shake hands, do make sermons short, says new guide
News
California lays out pandemic rules for church reopenings
Beliefs
Four young people of different faiths move into a home together, then a pandemic happens
Opinion
Warning: Your piety might be dangerous to your health