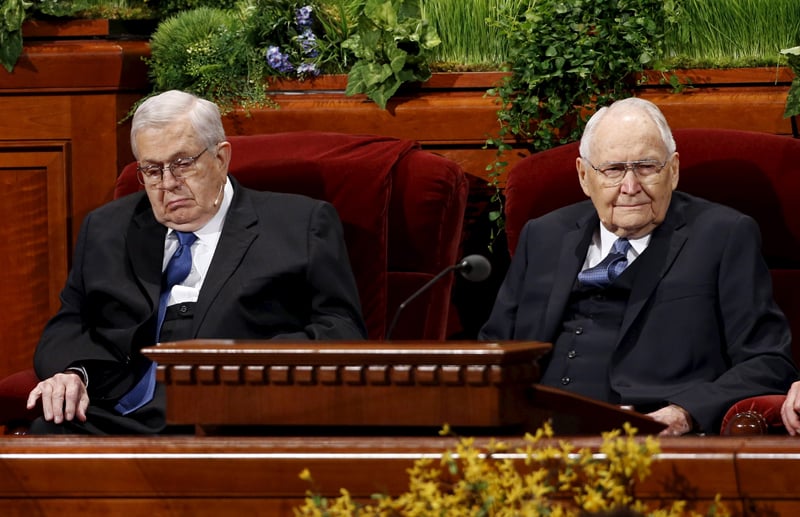 President Boyd Packer, left and Elder L. Tom Perry, right, of the Quorum of the Twelve Apostles of The Church of Jesus Christ of Latter-day Saints wait for the start of the first session of the 185th Annual General Conference of the Church in Salt Lake City, Utah on April 4, 2015. Photo courtesy of REUTERS/George Frey
*Editors: This photo may only be republished with RNS-MORMON-APOSTLE, originally transmitted on June 1, 2015.

SALT LAKE CITY – There’s no telling when LDS authorities will fill the void left by longtime Mormon apostle L. Tom Perry who died Saturday (May 30). But that it will happen is an essential process in The Church of Jesus Christ of Latter-day Saints.

The Utah-based faith’s Quorum of the Twelve Apostles has, of course, a dozen members, who are seated according to their length of service. The 92-year-old Perry was the second most senior apostle, appointed in 1974 — four years after Boyd K. Packer, who, at age 90, is the president of the body.

The three members of the governing First Presidency and the Quorum of the Twelve make up the top councils in the 15 million-member LDS Church.

When a new man (Mormon apostles must be male) is chosen, he will take his seat at the bottom of the quorum.

Most apostles are named at the next available General Conference, either in April or October, but some have been called at other times.

The new apostle doesn’t have to come from within the current top church leadership. Apostle Russell M. Nelson was a heart surgeon, and Dallin H. Oaks was a Utah Supreme Court justice.

“Apostles are chosen through inspiration by the president of the church, sustained by the general membership of the church, and ordained by the First Presidency and Quorum of the Twelve Apostles by the laying on of hands,” the church’s website explains.

With or without open discussion, a secret ballot is held, and the results are tallied and then forwarded to the church president. The president sometimes has accepted those recommendations and sometimes not.

All Mormon apostles are seen by members as “prophets, seers and revelators.” They also become full-time executives, running a billion-dollar enterprise. They oversee vast resources, departments and tasks. Unlike most CEOs, though, they give sermons, too.

Apostles make momentous decisions about Mormonism’s future: when to take one of its rare political positions, build a temple or establish a new policy.

It’s a lifelong commitment, and no one gets out alive.