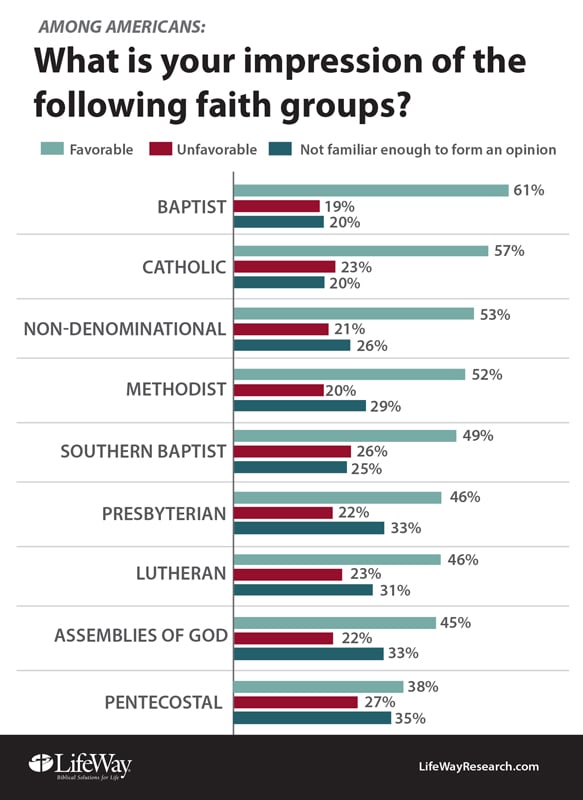 (RNS) Many Americans today don’t think they have a place for church in their lives.

“But they believe the church has a place for them, when or if they are interested,” said Scott McConnell, vice president of LifeWay Research, which issued a new survey Wednesday (June 3) on perceptions of religious denominations.

The findings show that as many as 45 percent of Americans will look at the church brand on the sign out front — Catholic or Baptist or Methodist or whatever — and drive past, thinking it is “not for me.”

And yet, McConnell said, the survey reveals an openness in most people — if not a very theologically deep one — to stopping by, even if they declare no religious identity, the “nones.”

“Many people view a church like the ice cream parlor down the road. They think, ‘When I’m in the mood, I can go.’ Church leaders can take it as good news: People haven’t ruled them out. But they have to be a little unsettled at how little people are thinking about this,” said McConnell.

The LifeWay survey, “American Perceptions of Denominations,” asked 1,000 U.S. adults last fall to give a favorable or unfavorable rating on nine traditions, or say they don’t know enough to form an opinion.

Every group had more favorable than unfavorable ratings, and the largest groups led the way:

“Churches today are at a crossroads,” McConnell said. “They are not declining today, but they are vulnerable.

“The buzzword now is ‘revitalization.’ The best way to change a brand is to change the meaning associated with a brand. You do that by appealing to what people care about. If a church is doing good things and bringing positive changes in people’s lives and communities, that generates a favorable rating and response.”

The landline and cellphone survey of 1,000 U.S. adults was conducted Sept. 26-Oct. 5, 2014. The margin of error is plus or minus 3.5 percentage points. The findings were released in time for the annual summer meetings of many Christian religious denominations, such as the Southern Baptist Convention, which meets June 16 in Columbus, Ohio. 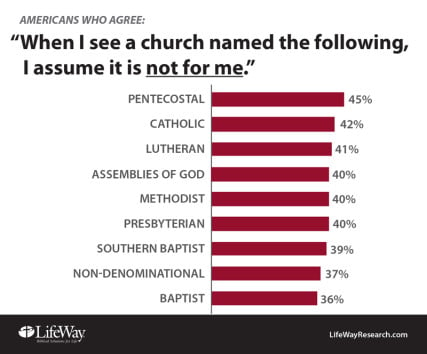 The SBC might take note: Respondents looked less favorably on the specifically Southern Baptist choice than on “Baptist” in general. There are dozens of Baptist denominations, including the liberal American Baptists and the historically black National Baptists.

LifeWay also asked respondents whether, for each of the nine traditions, they agreed that “When I see a church named the following, I assume it is not for me.”

Here, McConnell found a hopeful sign. According to the report, 40 percent to 48 percent of “nones” don’t see themselves in the pews at these churches but a “majority don’t automatically exclude them.”

Interfaith marriage might explain this. Although LifeWay’s survey didn’t ask about marital status, a Pew Research survey released in May on the changing landscape of U.S. religion found that 33 percent of U.S. adults who are married or living with a partner chose someone from another major religious tradition or no religion.