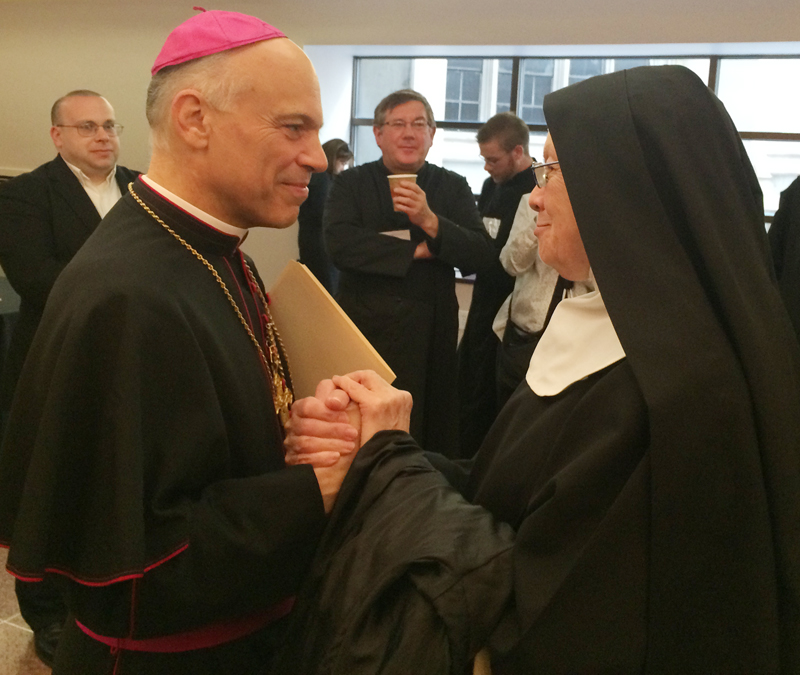 San Francisco Archbishop Salvatore Cordileone speaks with a nun Wednesday (June 3) after his talk, in which he criticized “gender ideology” as a threat to society and the church. Religion News Service photo by David Gibson

NEW YORK (RNS) Amid the national buzz over transgender celebrity Caitlyn (formerly Bruce) Jenner revealing her new female identity, a leading culture warrior in the Catholic hierarchy on Wednesday (June 3) denounced the spread of “gender ideology” and warned that it threatens the very foundation of the church’s faith.

“The clear biological fact is that a human being is born either male or female,” Archbishop Salvatore Cordileone of San Francisco said at the start of an address in Manhattan at a conference aimed at promoting an older form of the Mass in Latin.

“Yet now we have the idea gaining acceptance that biological sex and one’s personal gender identity can be at variance with each other, with more and more gender identities being invented,” said Cordileone, who is the point man in the battle against gay marriage for the U.S. Conference of Catholic Bishops.

Cordileone said a friend recently pointed out to him that a major university advertised housing “for a grand total of 14 different gender identities.”

“I’m sure even more will be invented as time goes on,” he said, prompting laughter from the audience of about 200.

“Those initials keep getting longer and longer,” he added, referring to debates over whether the LGBT acronym — for lesbian, gay, bisexual and transgender — should include other categories.

Cordileone did not mention Jenner by name, but his comments landed directly in the middle of a national debate that exploded on Monday when the Vanity Fair cover was published depicting Jenner for the first time as a woman — in satin lingerie and an alluring pose — and announcing she would now be known as Caitlyn, not Bruce.

Jenner, now 65, came to fame in the 1970s as a gold medal Olympian and then won a more dubious celebrity in recent years as part of the Kardashian clan of reality television stars. 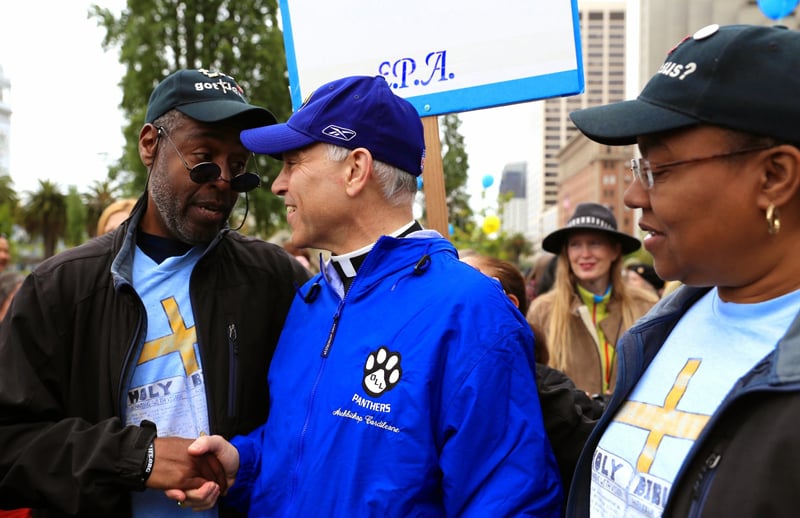 A supporter greets San Francisco Archbishop Salvatore J. Cordileone in San Francisco on May 16, 2015, in the midst of a public campaign of attack against the archbishop. The Archbishop Cordileone Support Day Family Picnic was organized by a group of San Francisco Catholics, led by Walk for Life West Coast co-chair Eva Muntean. Photo by Debra Greenblat, Catholic San Francisco, courtesy of Catholic News Service

Cordileone, who turns 59 on Friday, has become a controversial figure inside and outside the church for his battles against same-sex marriage and his outspoken defense of traditional Catholic teachings on sexuality.

In San Francisco, famous as an incubator of gay culture, he is currently embroiled in an especially fraught dispute with Catholic teachers over a handbook that aims to hold them to account for their views and behavior on sexual morality.

In his talk in New York at the Sacra Liturgia conference, Cordileone made a point of highlighting what he saw as the unacceptable evolution in American views on sexuality.

He said that what Pope Francis has also criticized as “gender ideology” poses not only a threat to society, but also to the faith. That’s because Christianity is based on what Cordileone said is the biological reality of the God-given “complementarity” of the male-female relationship.

“This is because God has used marriage as the primary sacred sign of our relationship with him,” he said, citing an author who described God as “hetero” and male, and Israel as “hetero” and female — hence their attraction to each other.

“It’s all the story of a marriage. God’s marriage covenant with Israel is fulfilled in the blood of Christ on the cross, establishing the new and eternal covenant between him, the bridegroom, and his bride, the church.

“When the culture can no longer apprehend those natural truths,” the archbishop continued, “then the very foundation of our teaching evaporates and nothing we have to offer will make sense.”

Cordileone said the inevitable result “is a reversion to the paganism of old, but with unique, postmodern variations on its themes, such as the practice of child sacrifice, the worship of feminine deities or the cult of priestesses.”

He cited as evidence the recent Gallup survey on liberalizing attitudes among Americans that showed approval of polygamy rising in recent years from 7 percent to 16 percent.