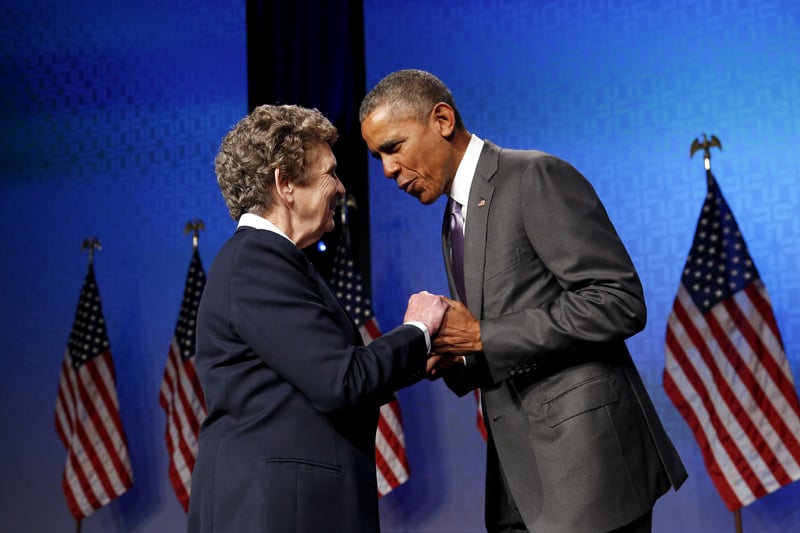 Catholic Health Association President and CEO Sister Carol Keehan greets President Barack Obama as he takes the stage for remarks at the Catholic Health Association conference in Washington on June 9, 2015. Photo courtesy of REUTERS/Jonathan Ernst
*Editors: This photo may only be republished with RNS-OBAMA-CHA, originally transmitted on June 9, 2015.

(RNS) The 2010 Affordable Care Act is now “woven into the fabric of America” and only the most “cynical” would turn back the clock on health reform, President Barack Obama told the Catholic Health Association on Tuesday (June 9).

He came to the CHA's annual assembly to praise the audience of 1,000 members for their role in the act’s passage in 2010, and he began by embracing its president, Sister Carol Keehan.

She praised his “leadership, creativity and perseverance,” and he promptly told the cheering crowd, “I just told Sister Carol I love her” and that the Affordable Care Act could not have passed “if not for her.”

But his speech was aimed at the cameras and beyond -- at Congress.

Any day now, the Supreme Court is expected to rule in King v. Burwell on the legality of subsidies provided to millions of low- and middle-income policyholders in 34 states where there is a federal marketplace. The ruling could bolster the ACA as currently structured or send it into "a death spiral,”  Trish Riley of the National Academy for State Health Policy told NPR.

With some members of Congress and Health and Human Services Secretary Sylvia Burwell in the audience, Obama’s speech was entirely about the success of his signature legislation and the need to keep it alive.

Obama recited statistics on how many uninsured are now covered and on the economic value of “portable plans in a competitive marketplace." But he anchored his speech in the faith-based association's moral calling.

“What kind of country do we want to be?” he asked in a series of rhetorical questions:

Is access to care a commodity “only for the highest bidders?” Or is it “a fundamental right?”

Health care today “is restoring the basic promise of America” and a critical part of creating opportunity for all, he said.

Example by example -- the autistic boy who now speaks, the wheelchair-bound woman who now walks, the once-uninsured man now cured of cancer -- Obama reiterated, “America is not a place where we turn our backs on the sick.”

Catholic facilities account for more than 20 percent of all health facility admissions in 22 states and the District of Columbia.

Obama, who began his career as a community organizer whose salary was paid by a Catholic agency in Chicago, lauded the group's efforts on the front lines, helping the sick, the poor and the uninsured.

“I am here today to say thank you for your tireless effort," he said. "Without your moral force we would not have succeeded.”

The association filed a friend-of-the-court brief in King v. Burwell, calling the attack on the ACA “a tenuous legal challenge that needlessly threatens the law’s foundation and health care coverage for working families.”