Legal status of, and support for, same-sex marriage in each state. Graphic courtesy of Public Religion Research Institute

(RNS) Most Americans — including people from every major religious group — predict gay marriage will be legalized nationwide when a hotly anticipated Supreme Court ruling is announced later this month.

Among those who favor legalizing same-sex marriage, 80 percent think the high court will rule their way, according to a survey by the Public Religion Research Institute released Thursday (June 11). And among those who oppose gay marriage, 47 percent say that’s the likely outcome, too.

Overall, PRRI found that 65 percent of U.S. adults expect a sweep for gay marriage. Only 25 percent predict the Supreme Court will leave existing state bans intact. And despite how contentious public debate has been on this issue for a decade, 10 percent of Americans say they have no opinion.

Yet, even before the marriage ruling is issued, public attention is shifting toward new contentious issues: Should there be nationwide laws banning discrimination for LGBT people  in the workplace, housing and public accommodations? Should there be a religious exemption to such laws?

PRRI found that 69 percent of people overall — including a strong majority of all major religious groups — would support nondiscrimination laws. Only 34 percent overall say business owners should be able, based on their religion, to refuse service to LGBT clientele.

But views vary significantly when it comes to religious exemptions for businesses. Here, white evangelicals are the only tradition where a majority (51 percent) support allowing small businesses to refuse products or services to gay and lesbian people on religious grounds.

“They want to support the principle of nondiscrimination while carving out exemptions for themselves,” said Robert Jones, president and CEO of PRRI.

Nonwhite Christians see things differently. Nearly 2 in 3 (63 percent) oppose exemptions to nondiscrimination laws. Jones said the idea of legal loopholes for refusing service may bring up “memories of past experience with segregated lunch counters and businesses refusing to serve them.” 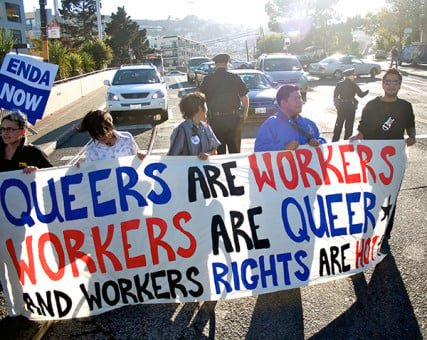 There is no federal employment nondiscrimination law covering LGBT people in all 50 states. But most people don’t know that, said Jones.

According to the Human Rights Campaign, “there are no state laws in 29 states that explicitly prohibit discrimination based on sexual orientation, and in 32 states that do so based on gender identity. ”

Other key findings from PRRI include:

Nearly 7 in 10 (69 percent) Americans, including majorities across the religious spectrum, favor laws that would protect LGBT people against discrimination in jobs, public accommodations and housing, compared with 25 percent who oppose such policies.

Six in 10 (60 percent) Americans oppose allowing a small business owner to refuse products or services to gay and lesbian people, even if doing so violates their religious beliefs. White evangelical Protestants (51 percent) are the only religious group in which a majority favors religious exemptions.

Almost everyone knows someone LGBT.

Majorities, including 72 percent of people with no religious identity, 68 percent of Catholics, 60 percent of white mainline Protestants and 53 percent of nonwhite Protestants, agree on this. The only exception is white evangelicals: 49 percent in this group say transgender people face “a lot of discrimination,” while 37 percent disagree and 15 percent had no opinion.