(RNS) What’s the next religious liberties faceoff? Some suggest it could be between LGBT workers and religious owners of private businesses. 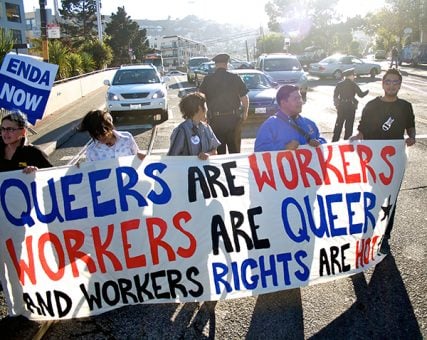 Workers march for employment equality at San Francisco’s Market and Castro streets in 2010.

But he has yet to sign an executive order version of the Employment Non-Discrimination Act, which would ban discrimination based on gender identity for all federal contractors and subcontractors, an order that affects for-profit businesses.

Now, in the wake of the Hobby Lobby ruling, such an order could rile the waters again, several legal experts say. They see a line between a ruling about contraception and hiring, firing and benefit concerns for lesbian, gay, bisexual and transgender employees.

In a 5-4 ruling, the court said that the government could not override the companies’ rights under the Religious Freedom Restoration Act.

If Obama signs the executive order or Congress passes ENDA (a bill stalled for 16 years), the same battle could ensue with religious owners of private businesses, said Kevin Theriot,  vice president of religious freedom litigation for Alliance Defending Freedom, which represented the owners of Conestoga.

“The government would be saying you can’t get the benefits of getting a federal contract unless you give up your religious liberty rights,” said Theriot. “It’s another form of coercion. The courts will have to weigh which is more important, religious freedom or the government’s interest in eliminating discrimination based on sexual orientation.”

Michael Helfand, associate law professor at Pepperdine University, called potential tension between ENDA and religious rights “a supercomplicated political problem. It will depend on the Obama administration’s appetite for another fight.”

Ira Lupu, law professor emeritus at George Washington University, predicted, “There will be employers who will say you can’t make us pay insurance for the spouses of gays and lesbians because that would be facilitating marriages to which we object.”

However, several LBGT activists and legal observers are undaunted by the Hobby Lobby ruling.

Ian Thompson, of the American Civil Liberties Union, who specializes in legislation affecting the LGBT community, said that “while the court expanded corporate power, it made really clear that the decision was narrow. It will not operate as a shield from other kinds of discrimination laws.”

Like Thompson, Human Rights Campaign legal director Sarah Warbelow pointed to the majority opinion, written by Justice Samuel Alito, which made a point of saying the justices were talking only about health care and not opening the door for broad interpretations.

In her view, Obama “should feel incredibly comfortable moving forward with the executive order.”

The public popularity of a viewpoint is not relevant. Just as most Americans wanted private businesses to provide insurance coverage for contraceptive services, most favor protections for LGBT workers, too.

A Public Religion Research Institute survey in May 2013 found 73 percent of Americans “favor employment laws that would protect gay and lesbian people from employment discrimination.” This included significant majorities of every major religious group — including 59 percent of white evangelical Protestants and 76 percent of Catholics.

Opposition is similar to the alignment opposing the contraception mandate — conservative evangelicals and the U.S. Conference of Catholic Bishops.

The Family Research Council has blasted ENDA as a liberty threat to religious employers. And the USCCB, which opposes “unjust discrimination” against gays and lesbians, has said ENDA would redefine gender as a matter of choice, not biology, thereby undermining marriage and threatening the liberty of those who disagree.

More than 150 religious leaders — including clergy and leaders of evangelical Christian universities, denominations and relief organizations — signed a June 25 letter urging Obama to “protect the rights of faith-based organizations that simply desire to utilize staffing practices consistent with their deep religious convictions.”

The letter, spearheaded by the Institutional Religious Freedom Alliance and the National Association of Evangelicals, includes potential language — similar to the Senate version of ENDA — that several prominent evangelical leaders suggested at a White House meeting earlier in June.

NAE President Leith Anderson said,  “The primary issue here is religious liberty and whether organizations have to be excluded from federal contracts because they adhere to their traditional values and practices.”

The request about the executive order follows a recent letter from some 90 organizations urging the Obama administration to halt the practice of permitting federally funded religious groups to hire and fire employees based on a person’s faith. Stanley Carlson-Thies said his Institutional Religious Freedom Alliance has previously requested that the White House retain that practice.