WASHINGTON (RNS) Five things to know about one of the most anticipated Supreme Court decisions of the year: 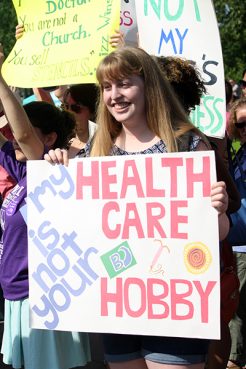 Demonstrators rallied at the Supreme Court on Monday (June 30) before the justices sided with the evangelical owners of Hobby Lobby Stores Inc., ruling 5-4 that the arts-and-crafts chain does not have to offer insurance for types of birth control that conflict with company owners’ religious beliefs.

1. Corporations can’t pray, but they do have religious rights.

Hobby Lobby isn’t a person. It’s a chain of crafts stores owned by a religious family. And though the evangelical Green family objects to parts of the Affordable Care Act’s emergency contraception mandate, it’s not the Greens but the company that writes the check for employees’ health insurance. The first question the justices had to answer was this: Does Hobby Lobby have religious rights? To many Americans, this sounds a little nutty. Does a craft store believe in God?

A majority of the justices held that a closely held company such as Hobby Lobby does have religious rights. The court didn’t apply those rights, however, to publicly held corporations, where owners’ religious beliefs would be hard to discern.

But well before the justices had delivered their verdict on this question, many legal scholars said they wouldn’t be surprised were they to affirm the company’s religious rights. American corporations do have some of the rights and responsibilities we usually associate with people. And in the 2010 Citizens United campaign finance case, the justices overturned bans on corporate political spending as a violation of freedom of speech — corporations’ free speech. 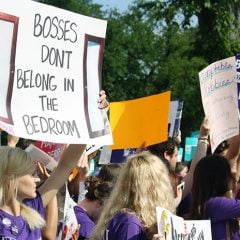 Protesters stand outside the Supreme Court on June 30, 2014, waiting for a decision on the Hobby Lobby case. Some protesters had homemade signs, like this one. The court later sided with the evangelical owners of Hobby Lobby Stores Inc., ruling 5-4 that the arts-and-crafts chain does not have to offer insurance for types of birth control that conflict with company owners’ religious beliefs.

2. The Affordable Care Act isn’t the only way to get contraception to women.

The justices in this case interpreted not only the 225-year-old Constitution but also the 21-year-old Religious Freedom Restoration Act. One of the things RFRA says is that if a federal law is going to substantially burden someone’s religious freedom, the feds must make sure that the law uses the “least restrictive means” to achieve its purpose. In this case, the purpose is providing birth control to female employees at no cost.

Justice Stephen Breyer asked the “least restrictive means” question when this case was argued before the court: Instead of making the company provide insurance that conflicts with its owners’ beliefs, how about the government pays for it? The Supreme Court answered Breyer’s question in the affirmative in this opinion: There are ways of getting contraception to women that don’t substantially burden the Green family’s religious beliefs. Justice Anthony Kennedy, in a concurring opinion, suggested the government could pay.

3. The American people would have ruled differently.

There are nine U.S. Supreme Court justices and most of them ruled for Hobby Lobby. But what if a softball team composed of a random sample of nine American adults got to decide this case instead? Well, the team would have likely come up with a very different decision.

In a Kaiser Health Tracking Poll, released in April, Americans expressed solid support for the contraception mandate, backing it by a 2-to-1 margin. Kaiser also asked specifically about requiring coverage in the Hobby Lobby scenario: Should a for-profit business owner with religious objections to birth control be subject to the requirement? Again, a majority (55 percent) said yes, they should, “even if it violates their owners’ personal religious beliefs.”

4. This court is rah-rah religious rights.

Chief Justice John Roberts’ court is shaping up to be pretty darn protective of that free exercise clause. Less than two months ago, the court ruled 5-4 that the town of Greece, N.Y., could regularly convene town meetings with sectarian Christian prayers. And in 2012, the court ruled 9-0 that a Lutheran school could fire a teacher who had some ministerial responsibilities, despite the government’s argument that her dismissal violated the Americans With Disabilities Act.

In all these cases, the court sided with religious rights over other rights. “The Roberts court has been a great champion of religious freedom,” said Lori Windham, senior counsel at the Becket Fund for Religious Liberty, which represented Hobby Lobby. The Supreme Court on Monday (June 30) sided with the evangelical owners of Hobby Lobby Stores Inc., ruling 5-4 that the arts-and-crafts chain does not have to offer insurance for types of birth control that conflict with company owners’ religious beliefs.

5. Hobby Lobby won, but the next company to cite religious objections might well lose.

Contraception mandate fans painted terrible scenarios of religious rights run amok in the case of a Hobby Lobby win. What if a Jehovah’s Witness invokes her religious rights and says she won’t cover blood transfusions in her company’s health plan? What if an employer says vaccinations conflict with his beliefs?

The Hobby Lobby decision may certainly embolden religious employers to object to laws they consider burdensome. But that doesn’t mean they’re always going to win. The court made clear in this ruling that religion should not always trump the law, and said its decision applies to the contraception mandate, not other insurance mandates. The court also specified that an employer could not use religion to get an exemption from laws that prohibit discrimination — on the basis of race, for example. The justices were silent, however, on whether employers’ religious beliefs could override laws that prohibit discrimination on the basis of sexual orientation.

Also unclear, legal experts say, is how this decision is going to affect religious non-profits and religiously affiliated schools and hospitals that want the same sort of exemption the justices awarded to Hobby Lobby.

WASHINGTON (RNS) The Supreme Court on Monday (June 30) sided with the evangelical owners of Hobby Lobby Stores Inc., ruling 5-4 that the arts-and-crafts chain does not have to offer insurance for four types of birth control that conflict with company owners’ religious beliefs.

Beyond the specifics of the Hobby Lobby case before them, the justices broke new legal ground by affirming that corporations, not just individual Americans or religious nonprofits, may claim religious rights.

Does Monday’s decision mean, however, that the religious beliefs of business owners stand paramount? That they are more important than a female employee’s right to choose from the full array of birth control methods she is promised under the Affordable Care Act? Or that business owners may invoke their religious rights to deny service to a gay couple?

The decision for Hobby Lobby, the justices made clear, applies to privately held companies such as Hobby Lobby — not vast publicly held corporations, for which the owners’ religious beliefs would be difficult to discern.

But in general, the ruling — one of the most anticipated in the high court’s current session — is a victory for conservatives who had hoped the justices would find that the federal government had trampled on the Constitution’s guarantee of free exercise of religion.

“This case demonstrates that Americans don’t give up their religious freedom when they open a family business,” said Lori Windham, senior counsel at the Becket Fund for Religious Liberty, which is representing Hobby Lobby. “The court understands that religion isn’t limited to what you do in a synagogue on Saturday or a church on Sunday.”

Those disappointed with the ruling faulted the justices for granting religious rights to corporations and compromising women’s health.

“This decision is a double-edged disaster,” said the Rev. Barry W. Lynn, executive director of Americans United for Separation of Church and State. “It conjures up fake religious freedom rights for corporations while being blind to the importance of birth control to America’s working women.”

“While the Obama administration may arrange for the government to provide contraceptives, a future administration could easily take that away,” Lynn continued. “In years to come, many women may find their access to birth control hanging by a thread.”

What the majority opinion says:

— The government could have found a way to achieve the goals of the Affordable Heath Act’s so-called contraception mandate without impinging on religious rights, a RFRA requirement.

Lawyers for Hobby Lobby argued that President Obama’s landmark health care law, had overstepped when it required the company and another owned by a Mennonite family — Conestoga Wood Specialties Corp. — to insure employees for birth control the companies’ owners found contrary to their Christian beliefs.

The justices’ affirmation of religious rights in the Hobby Lobby case falls in line with two other major religion cases in the past three years, making clear the court’s intention to preserve religious rights when they compete with others or conflict with anti-discrimination laws.

In the Hosanna-Tabor case in 2012, the court backed a Lutheran school that had fired a teacher who claimed she had been discriminated against under the Americans With Disabilities Act. In Greece v. Galloway in May, the court approved sectarian prayers, or invocations, at the start of government meetings.