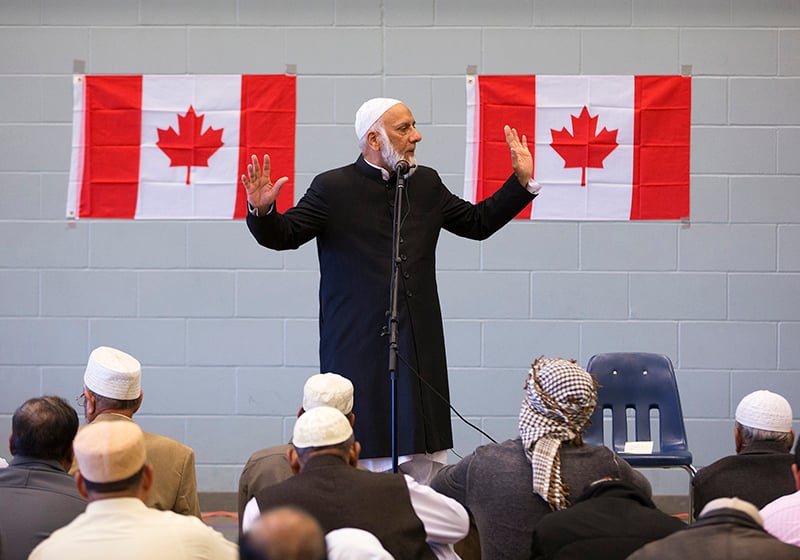 Imam Syed Soharwardy talks to his fellow Muslims during a show of support against the attacks on Canadian soldiers during their memorial service in Calgary, Alberta, on Oct. 24, 2014. Photo courtesy of REUTERS/Todd Korol
*Editors: This photo may only be republished with RNS-QUEBEC-MUSLIMS, originally transmitted on June 11, 2015.

TORONTO (RNS) The government of Quebec has introduced two bills, both aimed at Muslims.

The first would attempt to stanch the radicalization of Muslim youth through a 59-point plan that includes expanding the powers of Quebec’s Human Rights Commission to probe hate speech, enhancing training for police and teachers to recognize signs of radicalization, dedicating a police unit to patrol social media and establishing a hotline staffed by social workers to advise families and friends of suspected extremists.

There are also plans to set up a $2 million “anti-radicalization center” in Montreal, the first of its kind in North America.

The overall package is seen as a response to last autumn’s attacks on three Canadian soldiers in Quebec and Ottawa carried out by homegrown terrorists.

As well, 11 of 21 individuals linked to terror cases since January attended one Montreal college. Last month, 10 youths were arrested at Montreal’s airport on suspicion they were leaving the country to fight for Islamic State militants.

Many members of the Muslim community in Quebec have expressed concerns that the measures would target Muslims only and reinforce the belief that Muslims are a threat.

The other bill is aimed at barring public servants from wearing face-covering religious garments at work, and preventing members of the public from covering their faces while receiving government services.

“We are convinced the way we are approaching this is respectful and will be a plus for society.”

The bills announced Wednesday (June 10) come early in the mandate of Quebec’s Liberal majority government and are expected to become law by the end of the year.

Religion Hub
Bombing at Kabul mosque kills 10, including prominent cleric
Follow us on Facebook!
Submit your photos to RNS