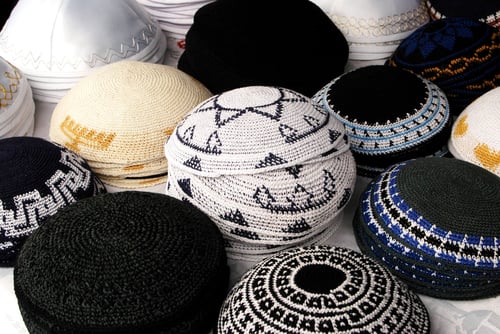 Collection of different Kippah, Kipa and Yarmulke, a hemispherical or platter-shaped cap, usually made of cloth, often worn by Jewish men.

(RNS) Unlike the Christian slice, the Jewish piece of the American religious pie is not shrinking, according to a study from the Pew Research Center.

Isn’t that good news for a people who — for the past half-century at least — have bemoaned high rates of intermarriage and foretold a dramatic shrinking of their numbers?

Not necessarily, say prominent Jewish scholars who have studied the statistics and point to trends within the trends that do not bode well for growth, or even for staving off contraction.

“On the one hand, the numbers are a positive surprise,” said Jonathan Sarna, professor of Jewish history at Brandeis University. “On the other hand, they should not be cause for complacency or undue celebration when you look more closely at them.”

The “positive surprise” comes from last month’s Pew report “America’s Changing Religious Landscape,” which made headlines for its finding that the proportion of Americans who are Christian has declined markedly in the past seven years. A less flashy takeaway from the report: Jews didn’t lose ground, and represent about 1.9 percent of the nation.

That statistic echoed the conclusion of Pew’s 2013 report,  “A Portrait of American Jews,” which found that about 1.8 percent of Americans — 4.2 million adults — said their religion is “Jewish.”

“Stability is the right term to apply here,” said Alan Cooperman, Pew’s director of religion research, who noted that studies use different definitions for who should be counted as a Jew. “Growth would be taking it too far.”

But “decline” had defined the Jewish demographic story since Jews hit their presumed high, according to a 1957 census report, of between 3 percent and 4 percent of the U.S. population. Jews watched as their intermarriage rate climbed steadily, from 17 percent before 1970 to 58 percent between 2005 and 2013, according to Pew.

In response, whole conferences and committees dedicated themselves to brainstorming ways to keep Jewish people Jewish: scholarships for Jewish preschools, free trips to Israel for Jewish young adults, synagogue programs to help interfaith couples raise Jewish children and even subsidized fertility treatments for Jewish couples struggling to have a baby.

So why isn’t this new stability, if not cause for celebration, at least relatively heartening for those who care about the community’s continuity?

Current data shows growth at the ends of the spectrum of Judaism, he said: among Orthodox, very observant Jews, and among those who reject the religious aspect of being Jewish — a group the authors of Pew’s 2013 study called “Jews of no religion.”

“Hot Jews and cool Jews are rising, but they obscure the decline of middle-ground Jews,” said Cohen. “We are losing the variety of Jews who are committed to being Jewish in ways other than Orthodoxy.”

The core of the middle ground — Reform and Conservative Jews, who generally do not adhere to Jewish law as closely as the Orthodox — are also not producing enough children to replace themselves. Less than half of young Jewish adults identify as either Reform or Conservative, compared with a solid majority of Jews ages 50 and older.

“The Orthodox are having children and everybody else forgot how to do it,” Sarna said. “That is a kind of danger sign for the future.”

And Jewish Americans skew older than most other religious groups, he said. The 2013 Pew survey showed that 24 percent of American Jews are 65 or older, compared with 18 percent of the overall U.S. population.

A countervailing factor: The data shows pride within the tribe.

A growing number of people with one Jewish parent are calling themselves Jewish, said Cooperman, noting another Pew study, published last summer, that showed Jews to be the most-liked religious group in America. “By and large Jews are very well accepted in American life, widely admired notwithstanding some indications of continuing anti-Semitism.

“In some ways, being Jewish is cool in America today.”