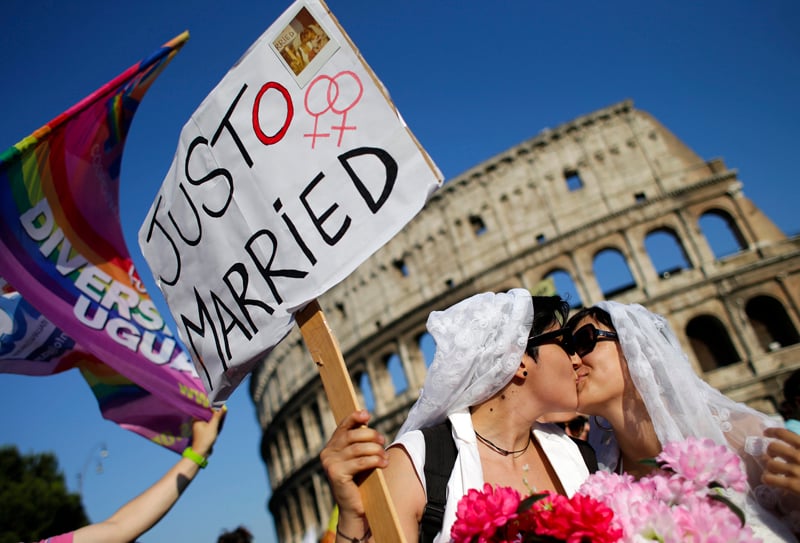 A lesbian couple kiss in front of the Colosseum during the annual gay pride parade in downtown Rome on June 15, 2013. Photo courtesy of REUTERS/Max Rossi
*Editors: This photo may only be republished with RNS-POPE-GAYPRIDE, originally transmitted on June 15, 2015.

Addressing around 25,000 followers from the Diocese of Rome, the pope said the differences between men and women are fundamental and “an integral part of being human.”

The pontiff likened a long-lasting marriage to a good wine, in which a husband and wife make the most of their gender differences.

“They’re not scared of the differences!” the pope said. “What great richness this diversity is, a diversity which becomes complementary, but also reciprocal. It binds them, one to the other.”

Heterosexual marriages not only ensured couples’ happiness, the pontiff said, but were deemed essential for good parenting.

But the priests of Rome may face difficulty in bringing the pontiff’s message to their communities, which are increasingly showing their openness to same-sex unions.

Francis’ address came a day after the city’s mayor, Ignazio Marino, marched alongside tens of thousands of people at the march.

The event’s success marked the shifting attitudes in predominantly Catholic Italy about same-sex couples, who currently have no legal status in the country.

Politicians from the political left and right have however agreed to start debating the legalization of civil partnerships, although marriage and gay adoption remain off the table.