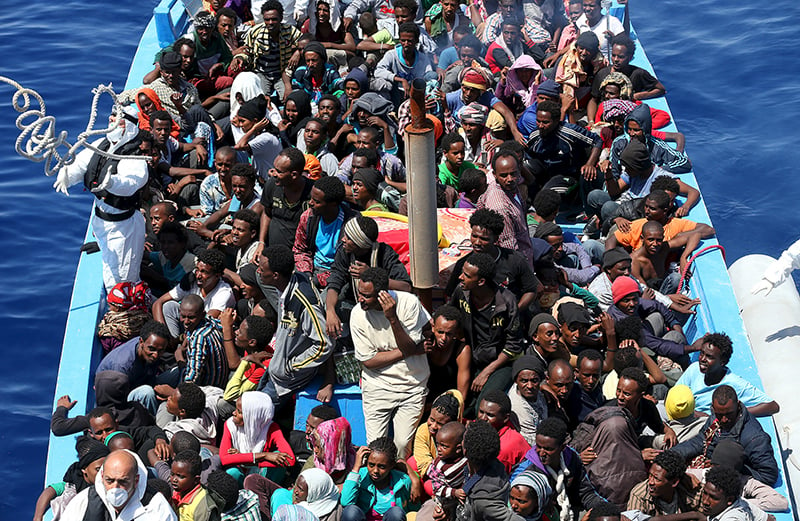 Three hundred sub-Saharan Africans sit onboard a boat during a rescue operation by the Italian Finance Police vessel Di Bartolo (not pictured) off the coast of Sicily on May 14, 2015. Around 1,100 migrants were rescued off the coast of Sicily, about 130 miles from Lampedusa, according to the police. Photo courtesy of REUTERS/Alessandro Bianchi
*Editors: This photo may only be republished with RNS-POPE-IMMIGRANTS, originally transmitted on June 17, 2015.

VATICAN CITY (RNS) Pope Francis on Wednesday (June 17) said people who shut out refugees should seek forgiveness, after clashes on Italy’s borders as European countries try to push back against a wave of migrants fleeing by boat from Libya.

“It is my hope that the international community should act in a fitting and effective way to prevent the causes of forced migration,” the pontiff said. He called on Catholics to pray for people “who seek a home where they can live without fear” and praised those who help refugees.

The pontiff also picked out those who have failed to support refugees: “I invite everyone to ask forgiveness for those persons and institutions that close the doors on these people who are searching for family, that are searching for safety.”

Countries neighboring Italy have recently upped security and returned migrants who had crossed the border, despite European Union rules stipulating the migrants must stay in Italy until their visa or asylum application is processed.

Rome has, however, argued that European nations must do more to share the burden of new arrivals, as 200,000 are estimated to reach Italy by sea this year.

The pope has repeatedly expressed his support for migrants and refugees, in 2013 visiting the Italian island of Lampedusa, which is an arrival point for many people taking the journey across the Mediterranean.

News
Pope Francis talks about Benedict, criticism and life after COVID-19 in new interview
News
After Nice attacks, Pope Francis and French Catholics call for peace with Muslims
Opinion
Pope Francis on civil unions: Another step toward common ground with the LGBTQ movement
News
Taco trucks and voter guides boost political profiles of faith communities at the margins
News
With rising COVID-19 cases inside the Vatican, pressure mounts for Francis to don a mask