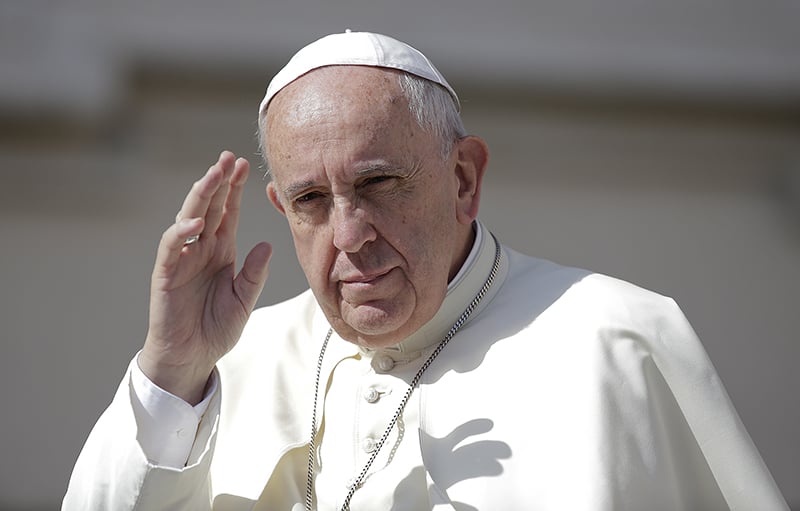 Pope Francis waves as he arrives to lead his Wednesday general audience in St. Peter’s Square at the Vatican on June 17, 2015. Photo courtesy of REUTERS/Max Rossi
*Editors: This photo may only be republished with RNS-POPE-ENCYCLICAL, originally transmitted on June 17, 2015.

In the first papal letter dedicated to the environment, a key theme of Francis’ papacy, the pope uses a tone of prophetic urgency to describe climate change as “a global problem with grave implications” and one that requires a “bold cultural revolution” in mankind’s thinking.

“Nobody is suggesting a return to the Stone Age,” Francis writes, “but we do need to slow down and look at reality in a different way, to appropriate the positive and sustainable progress which has been made, but also to recover the values and the great goals swept away by our unrestrained delusions of grandeur.”

By stating the problem so clearly, and in a church document of such gravity, Francis immediately pushes global warming and the environment to the top of the church’s social agenda, and rejects efforts by conservatives — many in his own church — to water down the encyclical.

Also, by inviting a top bishop of the Eastern Orthodox church and a leading climate change scientist to the official Vatican presentation of the document — both unprecedented steps — Francis is showing that he sees the matter as one of such spiritual and scientific urgency that he intends to reach beyond the walls of the Catholic Church for allies.

Climate change “represents one of the principal challenges facing humanity in our day,” the pope says in the letter, known as an encyclical. Titled “Laudato Si’,” or “Praise be,” the name is taken from a hymn to God and his creation by St. Francis of Assisi.

The 192-page document has been translated from the original Spanish into seven other languages in order to reach a global audience. The full title is “Praise Be to You: On Care for Our Common Home.”

In the encyclical, the pontiff points to the scientific consensus on climate change as a mostly man-made phenomenon, but is firm in stating population control through abortion is not a solution.

“Concern for the protection of nature is also incompatible with the justification of abortion,” he writes in a passage that could also mollify Catholic critics who say the pontiff is giving ammunition to abortion rights supporters by focusing on climate change. 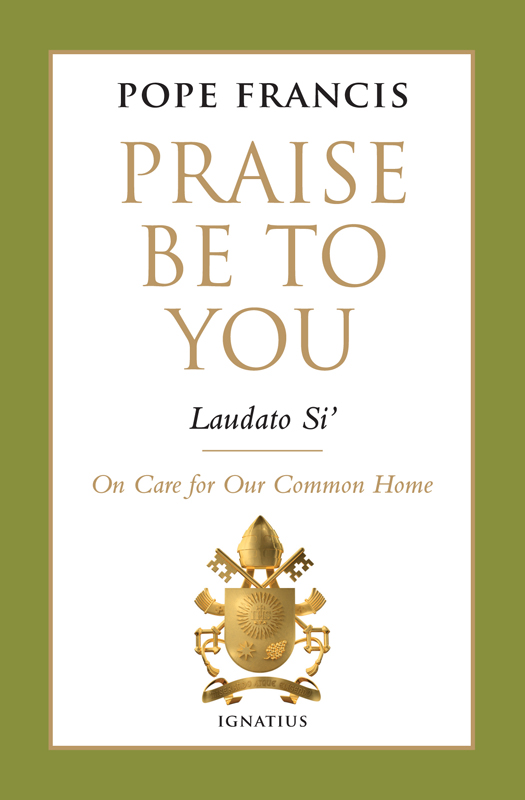 “How can we genuinely teach the importance of concern for other vulnerable beings, however troublesome or inconvenient they may be, if we fail to protect a human embryo,” Francis asks.

Instead, the pontiff urges people to recognize the reality of climate change, saying those seeking solutions are all too often met with indifference from the wider population.

“Obstructionist attitudes, even on the part of believers, can range from denial of the problem to indifference, nonchalant resignation or blind confidence in technical solutions. We require a new and universal solidarity,” the pope says.

He has found such solidarity in the Ecumenical Patriarch Bartholomew, leader of the Orthodox Church and a longtime advocate of environmental protection who is mentioned at length in the papal letter for his work on the environment.

Speaking at the official launch of the encyclical, Metropolitan John (Zizioulas) of Pergamon, representing the Orthodox Church, praised the pontiff for drawing “the attention of the world to the urgent need to protect God’s creation.”

“This encyclical comes at a critical moment in human history and will undoubtedly have a worldwide effect on people’s consciousness,” he said.

Speaking to Religion News Service after the event, he said Christians should reconsider the concept of sin when addressing climate change:

“Certainly we disobey God’s will, not only when we don’t obey his specific laws but also when we don’t respect his creation. Therefore we must realize that it is a sin and we must add to the list of sins the ecological sin.”

Introducing the encyclical, Cardinal Peter Turkson, president of the Pontifical Council for Justice and Peace, said the pope intended to have a global impact: “The Holy Father addresses not only individual citizens, but associations, civil society organizations that can do so much to reverse the trend. … We are all equally responsible.”

In the letter, the pontiff urges people to overcome a “culture of waste” and change their consumption habits, suggesting climate change skeptics are merely trying to maintain their lifestyles.

“As often occurs in periods of deep crisis which require bold decisions, we are tempted to think that what is happening is not entirely clear. Superficially, apart from a few obvious signs of pollution and deterioration, things do not look that serious, and the planet could continue as it is for some time,” he says.

Francis has little patience with those who have adopted a lax attitude on climate change: “This is the way human beings contrive to feed their self-destructive vices: trying not to see them, trying not to acknowledge them, delaying the important decisions and pretending that nothing will happen.”

But the pope’s strongest criticism is reserved for wealthy states and companies, as the pontiff points to past failures to tackle the problems associated with climate change at the global level.

“These days, they are mentioned in international political and economic discussions, but one often has the impression that their problems are brought up as an afterthought. … Indeed, when all is said and done, they frequently remain at the bottom of the pile,” the pontiff writes.

The pope singles out rich countries for their “disproportionate use of natural resources” in the Global South, particularly in African countries, which has led to drought and a “devastating” impact on agriculture.

“In different ways, developing countries, where the most important reserves of the biosphere are found, continue to fuel the development of richer countries at the cost of their own present and future,” the pope says.

The pontiff criticizes a “structurally perverse” system and calls on developed countries to significantly limit their consumption of nonrenewable energy and support sustainable development.

While the pope paints a dark picture of the business world, Carolyn Woo, CEO and president of Catholic Relief Services, said the encyclical should also be viewed as an appeal to corporations to be part of the solution.

“Business is neutral, it is the moral energies of the people who run business which determine whether it does good or if it does harm,” she told RNS after speaking at the launch event. “Most people think of business as a necessary evil, because it does do harm. But on the other hand, it has the potential to do good.”

In the papal letter Francis hones in on particular aspects of business, including the use of GMOs (genetically modified organisms) in agriculture. They are viewed not as inherently problematic, but the pope notes “a number of significant difficulties” in their management.

“In many places, following the introduction of these crops, productive land is concentrated in the hands of a few owners,” he writes. “The expansion of these crops has the effect of destroying the complex network of ecosystems, diminishing the diversity of production and affecting regional economies, now and in the future.”

Francis’ intervention comes ahead of a U.N. summit in September in New York to decide on new Sustainable Development Goals, a set of guidelines to determine states’ action, and a U.N. conference in December in Paris to decide on plans to tackle climate change.

In reference to the management of GMOs, the pontiff calls for a wide range of actors — including farmers and seed producers — to be brought to the table to have their views heard.

The pope has faced criticism for weighing in on the climate change debate, with some arguing that he should focus on Catholic teachings and leave environmental issues to the experts.

Addressing his detractors, Francis says he intends the encyclical to spark a discussion: “The Church does not presume to settle scientific questions or to replace politics. But I want to encourage an honest and open debate, so that particular interests or ideologies will not prejudice the common good.”

His view was backed by John Schellnhuber, founding director of the Potsdam Institute for Climate Impact Research, who was invited to the Vatican to explain the science behind the encyclical.

“Only if faith and reason work together, hand in hand, we can overcome this crisis,” he said, before detailing the past and possible future impact of climate change.

The pope does not hesitate to draw out the damaging effects of inaction, including the premature death of poor people, water shortages and conflicts over resources.

While the encyclical ends with a prayer, a resounding warning on climate change can be found within its pages: “It is foreseeable that, once certain resources have been depleted, the scene will be set for new wars, albeit under the guise of noble claims.”