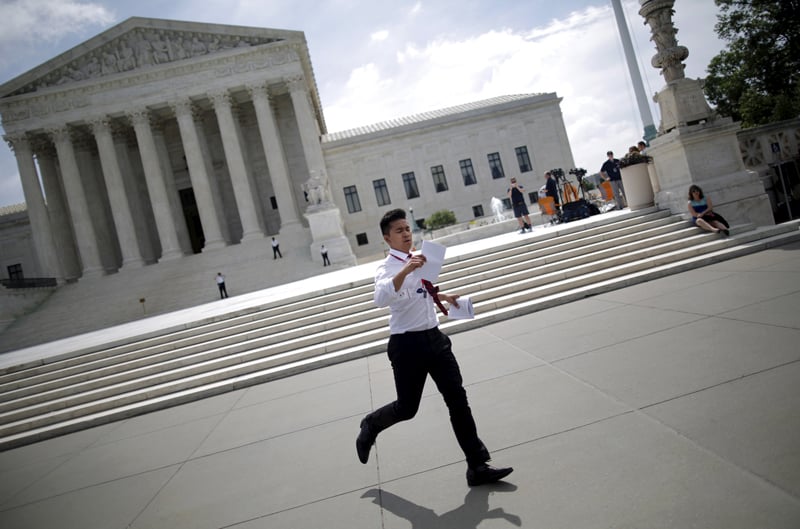 A news assistant runs copies of court rulings to his fellow reporters outside the Supreme Court in Washington on June 18, 2015. The court ruled that a town in Arizona violated a local church’s free speech rights by preventing it from posting signs notifying the public of its worship services. The unanimous decision was in favor of Good News Community Church, which objected to its treatment by town officials in Gilbert, Ariz. Photo courtesy of REUTERS/Carlos Barria
*Editors: This photo may only be republished with RNS-COURT-SIGNS, originally transmitted on June 18, 2015.

(RNS) A tiny Arizona church that has no permanent home prevailed at the Supreme Court on Thursday (June 18) when the justices ruled that the Town of Gilbert must scrap strict rules on temporary signs pointing worshippers to the church’s services.

More a free speech case than a religious rights case, Good News Community Church’s victory has nevertheless buoyed those who say the town had placed the free speech rights of politicians and others above those of a house of worship.

“Gilbert had taken a page from George Orwell’s Animal Farm, saying that all citizens were equal, but that politicians were ‘more equal’ than everyone else,” said Eric Rassbach, deputy general counsel at the Becket Fund for Religious Liberty, which filed a friend-of-the-court brief in the case.

“The Supreme Court rightly decided that churches and other religious speakers should not be treated like second-class citizens.”

But Chief Justice John Roberts, when the court heard arguments in the case on Jan. 12, confirmed with Good News’ attorney that he was not basing his argument on the religious nature of his client, or the fact that the curbside signs in question pointed people toward a church service. 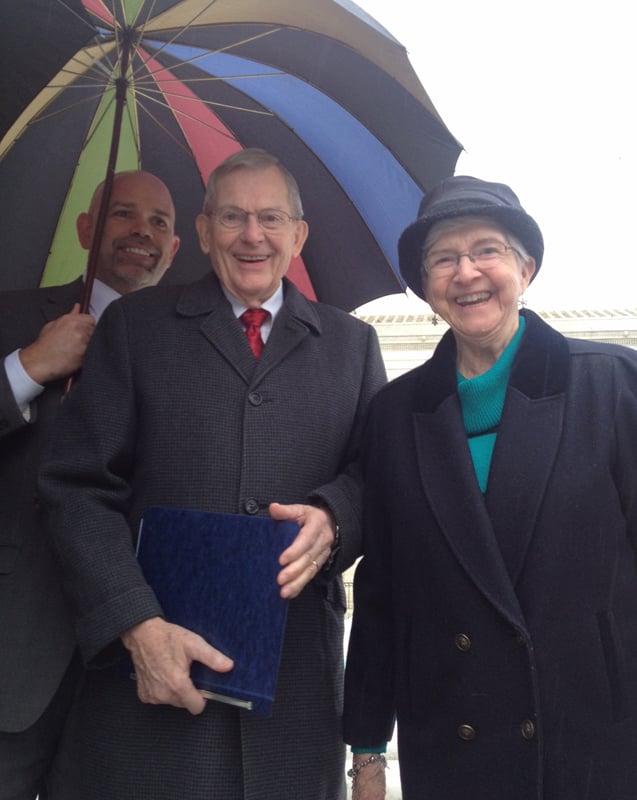 Pastor Clyde Reed of Good News Community Church, center, his wife Ann, and Kevin Theriot of the Alliance Defending Freedom, back left, on the steps of the Supreme Court after their case had been argued to the Supreme Court justices on January 12, 2015. Religion News Service photo by Lauren Markoe

The justices’ unanimous ruling in Reed v. Town of Gilbert — delivered in several concurring opinions — said the town’s sign rules did not pass the “strict scrutiny” speech test: If the government can’t present a compelling reason as to why different types of speech are regulated differently, the restrictions are unconstitutional.

The opinion throws out a 9th U.S. Circuit Court of Appeals ruling that favored the town.

“The government can generally regulate the size and location of signs, and the volume of loudspeakers, and the time and route of a parade, but it cannot base its regulation on what the speakers are saying,” he said.

“This black-letter rule against ‘content-based’ regulation of speech helps prevent the government from distorting, shrinking or hijacking the marketplace of ideas.”