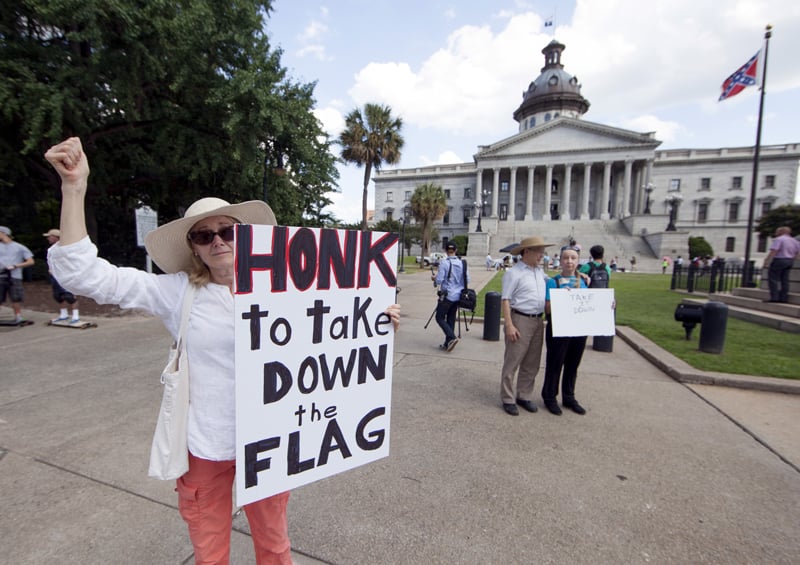 Sheila DiCiorrio holds a sign asking for the Confederate battle flag that flies at the South Carolina State House to be removed in Columbia, S.C., on June 20, 2015. Photo courtesy of REUTERS/Jason Miczek
*Editors: This photo may only be republished with RNS-CONFEDERATE-FLAG, originally transmitted on June 22, 2015.

(RNS) Does a Southern Baptist leader’s call for the Confederate battle flag to come down mark a sea change in the views of evangelicals about a symbol long wrapped in both support for slavery and regional pride?

Or will conservative white Christians in the South resist change even as a growing number of Republican leaders — including S.C. Gov. Nikki Haley — from the region call for the flag to go?

“The cross and the Confederate flag cannot co-exist without one setting the other on fire,” Russell Moore, president of the Southern Baptist Convention’s Ethics and Religious Liberty Commission, wrote in a widely noted blog post on Friday (June 19).

The column touched a chord because it landed in the midst of the national anguish, and debate, over racism in the U.S. following the massacre of nine parishioners by a white gunman inside the Emanuel African Methodist Episcopal Church in Charleston, S.C. Some say Moore’s call is a marker of a changing ethos within the nation’s largest Protestant denomination as conservative Christians join in mourning the “Emanuel Nine.” Others wonder if the divide over the flag remains.

“Russell Moore articulated publicly and brilliantly what many of us have been saying for many years,” said Alan Cross, a white Montgomery, Ala., Southern Baptist pastor, who last week successfully requested that the Executive Committee of the Southern Baptist Convention report on its progress on racial reconciliation.

“That sentiment is just becoming more vocal and accepted now. Eyes are opening.”

Church historian Bill Leonard of Wake Forest University Divinity School agreed that Moore’s sentiments could “prevail given the pain of the current situation.”

But he said it’s doubtful all Southern Baptists will back him, despite the June 17 killings.

“I think that his constituency in the SBC will be divided, particularly in South Carolina and Georgia, where those flag issues still create energy,” Leonard said.

Moore said Monday that he has received an overwhelmingly positive response to his blog post.

“I’m surprised by how positive the reaction has been, probably 98 or 99 percent” in favor generally, he told Religion News Service.

“Southern Baptists have been overwhelmingly positive in their responses,” Moore said. “The Lord is doing amazing things in bringing Southern Baptists together across ethnic and racial divisions.”

Leaders from African-American clergy to Sikh officials have called for South Carolina legislators to halt the flying of the controversial flag, especially at South Carolina’s State House. Some SBC executives affirmed Moore’s call for taking down the Confederate flag.

“Gospel-minded Christians should support taking down the flag,” Southern Baptist Theological Seminary President R. Albert Mohler Jr. said in a statement to RNS. “Love of neighbor outweighs even love of region, and it certainly requires that we disassociate ourselves from any hint of racism, now or in the past.”

Danny Akin, president of Southeastern Baptist Theological Seminary in Wake Forest, N.C., tweeted his thanks to Moore for his “very fine article.”

But Moore’s comments have received some criticism.

Blogger Douglas Wilson wrote that he has declined to join Moore’s call and instead thinks the response to the shootings at Emanuel AME should be on “issues that stand a chance of being far more relevant to the shooting than a flag at the state capitol.

In a National Review column, evangelical writer David French differentiated between appropriate and inappropriate uses of the Confederate flag.

“Flying it as a symbol of white racial supremacy is undeniably vile, and any official use of the flag for that purpose should end, immediately,” he wrote. “Flying it over monuments to Confederate war dead is simply history.”

Southern Baptists’ sentiments about the flag and other racially charged issues could be shaped by what many have described as a moving prayer session on June 16 during their annual meeting, during which white Southern Baptists joined African-Americans, Hispanics, Asians and Native Americans onstage to pray for reconciliation and repentance for racism.

“Southern Baptists are finding their identity more in Christ than in Southern culture or racial identity,” said Cross, author of “When Heaven and Earth Collide: Racism, Southern Evangelicals, and the Better Way of Jesus.”

“We still have a long way to go, but change is happening. Moore reflects that rather than being an outlier,” he said.

In the early days of the denomination, which has since repented for the role slavery played in its formation, such a statement about the Confederate flag would probably have been unthinkable.

An 1863 resolution by delegates of the Southern Baptist Convention said they “will render a hearty support to the Confederate Government in all constitutional measures to secure our independence.”

A century and a half later, Cross said that he has seen change beyond prayers from a convention stage and blog posts from a prominent denominational official.

“I do not know of very many Southern Baptists, if any, who fly the Confederate flag,” he said. “And I live in Montgomery, Alabama, the first capital of the Confederacy. We have some memorials around with the flag on it, but they are relics of the past and are not related to the active ministry of churches.”