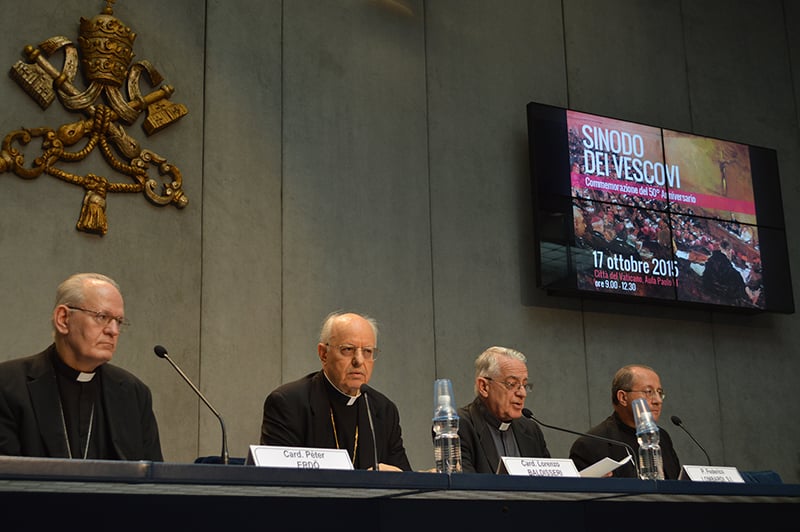 VATICAN CITY (RNS) Vatican officials on Tuesday (June 23) released a document on family values — a precursor to a major meeting in October — that underscores the ongoing tension between Pope Francis’ desire for a more “welcoming” church and the need to hew to long-standing tradition and doctrine.

“The Christian message should be conveyed using language that generates hope,” reads the 78-page working document, which compiles the responses of Catholics around the world on issues facing modern families.

“It is necessary to adopt a style of communication that is clear and inviting, open and not moralizing, judgmental and controlling, which witnesses to the moral teaching of the Church while at the same time remaining sensitive to the situation of each individual person,” it reads at one point.

Yet the wide-ranging document also strongly reiterates church teaching on marriage as a sacramental, lifelong commitment between a man and a woman, and it attacks fertility treatment procedures and foresees no change in Catholicism’s views of gay couples.

At the same time, it holds out the possibility of an eventual “penitential road” so that Catholics who have divorced and remarried without an annulment could receive Communion — a topic that sparked unusually heated and public debates at the first meeting, called a synod, held last fall to discuss the church’s approach to families today.

The document is essentially a road map for this October’s follow-up summit of leading churchmen from around the world.

While the “instrumentum laboris” unveiled Tuesday is expected to be a starting point for this fall’s debates, it also stresses that the more than 200 bishops and cardinals in attendance will be free — and, indeed, encouraged — to speak their minds.

Introducing the paper at a Vatican press conference, Cardinal Lorenzo Baldisseri, head of the Vatican’s office on the synod, said the contributions from Catholics around the world had been “extremely useful” in understanding opinions from different cultures globally.

The views “harmonize in a symphony of voices that express the richness of ecclesiastic experiences present in the world,” he said.

The document also highlights the challenges that economic inequality and environmental degradation pose to families in many societies.

Rocco Palmo, a popular Catholic blogger in Philadelphia, called the document a “fight card” for “the Vatican’s Main Event of 2015.”

But the paper is not meant to have a negative impact, Italian Archbishop Bruno Forte, a leading Italian theologian, said during the official launch.

“The intention of the text is not, however, to respond to the challenges in a moralistic or controversial way. Rather, (it is) that of proposing positively the beauty and the importance of the family,” he said.

In the newly released document, Vatican officials describe the family as a fragile unit suffering from “cultural and social crises” like never before.

Space is dedicated to bioethics, with scientific advancements in fertility treatment blamed for rendering human life “decomposable.” The Vatican also warns of such fertility treatments being used by “singles or couples, not necessarily heterosexual and properly married.”

“In advanced countries, the desire to have a child ‘at any cost’ has not made family relationships happier and stronger, but in many cases it has aggravated the inequality between men and women.”

The Vatican document reconfirms the church’s firm opposition to abortion, and in its discussion of violence against women forced sterilization is also criticized. Additionally, officials decry “the extremely negative consequences of practices tied to procreation,” specifically mentioning “wombs for rent or the market in embryonic cells.”

Catholics who gave feedback for the document requested greater importance be put on adoption and fostering, which officials say will be examined further. Yet in a nod to the Vatican’s opposition to same-sex relationships, officials underline that “the education of a child must be based on the difference between the sexes, as with procreation.”

Gay people are to be “respected in dignity and received with sensitivity and delicacy,” the document says, and priests are asked to support those with gay family members. But the Vatican leaves no room to welcome same-sex couples into the church.

The marginalization of gay Catholics was a key point of contention at last year’s synod, along with the position of divorcees in the church.

The path to opening Communion to divorced Catholics is described in the paper as an ongoing conversation, while officials call on pastors to remind parishioners of “the irreversibility of the situation and the life of faith of couples in new unions.”

Officials also touched upon the role of women in the male-dominated Catholic Church, suggesting there should be “recognition of the decisive role of women (and) a greater appreciation of their responsibility in the church.”