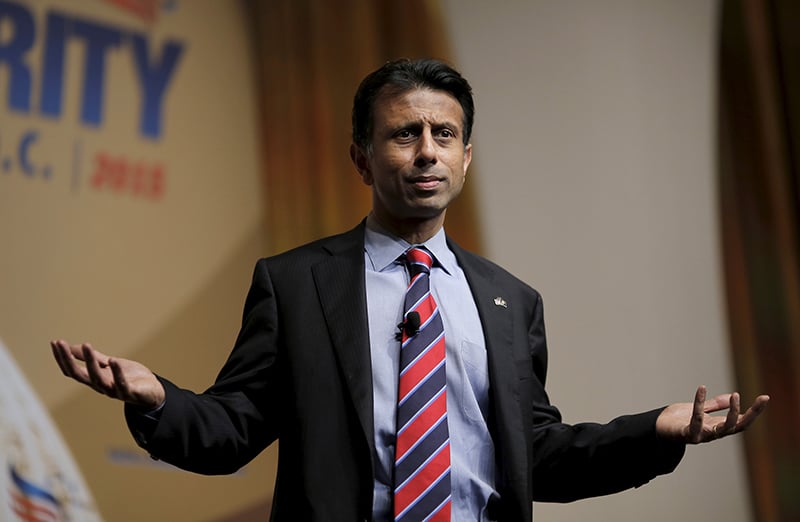 Louisiana Gov. Bobby Jindal addresses a legislative luncheon held as part of the “Road to Majority” conference in Washington on June 19, 2015. Photo courtesy of REUTERS/Carlos Barria
*Editors: This photo may only be republished with RNS-JINDAL-FAITH, originally transmitted on June 24, 2015.

He had been inching up the standings in the GOP 2016 race with the support of the “Believe Again” super PAC. In October, it rallied Iowa crowds with t-shirts reading “America did not create religious liberty, religious liberty created America.

His “dismantle Washington” conservative pitches once nearly skipped a beat on the Constitution. He said he would  ban the notorious Westboro Baptist Church from picketing the funerals for victims of a mass shooting in Lafayette, La., in July. It sounded like a free speech showdown when, actually, he was loudly enforcing an existing state law restricting funeral pickets.

When the Supreme Court made same-sex marriage legal nationwide, on June 26, Jindal’s administration initially stalled on issuing licenses, awaiting a lower court ruling “even though we disagree with it and believe it was wrongly decided, and has nothing to do with the Constitution,” said Mike Reed, Jindal’s spokesman in the governor’s office, told the Times Picayune.  By July, the licenses were being issued. However, Jindal (in a long line of GOP contenders) supports Kentucky clerk Kim Davis who spend five days in jail for refusing, on religious grounds, to sign licenses for same-sex couples.

(RNS) Louisiana Gov. Bobby Jindal on Wednesday (June 24) became the latest Republican to throw his hat into the presidential ring — and in this case, “last” may also mean “least.” Jindal, 44, is currently bringing up the rear in the polls among the 15 declared or likely GOP candidates. But he has a strong profile as a religious conservative, the kind of reputation that could give him a prayer, at least in the primaries. Here are five faith facts about Jindal, who has one of the more intriguing religious backgrounds among all the contenders.

1. He was born and raised a Hindu.

He was born Piyush Jindal in 1971, four months after his parents arrived in Louisiana from their native India. When he was 4 he asked to be called “Bobby” after a character on “The Brady Bunch,” a favorite television show.

“I was raised in a strong Hindu culture, attended weekly pujas, or ceremonial rites, and read the Vedic scriptures,” he wrote in the Jesuit weekly America in 1993, the fullest account of his religious journey. “Though my prayers were a child’s constant stream of requests and broken promises, Hinduism provided me with moral guidance and spiritual comfort. It never occurred to me that I should consider any other religion; to be a Hindu was an aspect of my Indian identity.”

2. His journey to Christianity “was a gradual and painful one.”

His introduction to Christianity was when a childhood friend, a Southern Baptist, told him that “you and your parents are going to hell.” He was also given a Bible with his name embossed in gold. The experience did not impress him, but it did prompt him to begin examining his Hinduism more closely.

As a junior in high school, he had a crush on a girl who started talking about her faith in God and opposition to abortion when he started talking to her about going out on a date. She invited him to church, and that led him to begin reading the Bible more closely — though with a flashlight in a closet at home so his parents would not find out.

It took two years until he finally converted: “The single most important time in my life is the moment that I found Jesus Christ,” Jindal said at a prayer rally in South Carolina earlier this month. Then a few years later in college he became a Catholic. “I am best described as an evangelical Catholic,” he said while at Liberty University last spring to deliver a commencement address at the bastion of evangelical Protestantism.

3. His parents were not happy with his conversion.

“My parents were infuriated by my conversion and have yet fully to forgive me,” he wrote in 1993. “There were heated discussions, many of them invoking family loyalty and national identity. My parents have never truly accepted my conversion and still see my faith as a negative that overshadows my accomplishments.”

But, he wrote, “If Christianity is merely one of many equally valid religions, then the sacrifices I made, including the loss of my family’s peace, were senseless.”

4. He has become a stalwart of the “religious right.”

Jindal was once considered a rising Republican star because of his mastery of policy and his championing of reasonable compromises, exhorting the GOP to “stop being the stupid party.” But in the last couple of years he has fashioned himself as an outspoken social conservative and champion of religious believers, especially conservative Christians.

“I don’t know about you, but sometimes it feels like evangelical Christians are the only group that it’s OK  to discriminate against in this society,” Jindal said at a Good Friday prayer breakfast in Iowa this spring.

Jindal has said he has “no problem” if public schools want to teach creationism or intelligent design, and he added: “The reality is I’m not an evolutionary biologist.” He has taken up the religious freedom cause in a big way. After the Louisiana Legislature this spring rejected a religious freedom bill designed to protect companies whose religiously committed owners disagreed with same-sex marriage, Jindal quickly issued a “marriage and conscience” executive order.

He has also been one of the most vocal defenders of the “Duck Dynasty” reality TV clan, whose patriarch, Phil Robertson, has in particular become known for controversial takes on faith and politics. The admiration is mutual. “I’m the kind of guy who really likes smart people … and that guy’s one of the smartest people I’ve ever met in my life,” son Willie Robertson said of Jindal earlier this year.

5. He highlights the threat of radical Islam.

During a visit to Europe this year, Jindal claimed that there are “no-go zones” in cities where Muslims had imposed Shariah that made police “less likely to go in.” He later stood by his comments, adding that there are “communities of people that don’t want to integrate” but instead have immigrated “to colonize, to overtake the culture.”

He has repeatedly criticized President Obama for going too easy on “radical Islamic terrorism,” saying Obama was “unfit to be commander in chief” and blasting the president’s National Prayer Breakfast remarks in February about Christianity’s history of violence.

“It was nice of the president to give us a history lesson at the Prayer Breakfast,” Jindal said. “Today, however, the issue right in front of his nose, in the here and now, is the terrorism of Radical Islam. … The Medieval Christian threat is under control, Mr. President. Please deal with the Radical Islamic threat today.”

Bonus fact: He once helped in an exorcism.

In a 1994 essay, Jindal described participating in an exorcism of a college classmate he called “Susan.” She had begun having mysterious visions, according to an account in Mother Jones, and visitors to her apartment “reported a faint odor of sulfur.” Then one evening Jindal and others staged an intervention, though without the help of a priest, as Catholic teaching would normally require.

“Kneeling on the ground, my friends were chanting, ‘Satan, I command you to leave this woman,’“ Jindal wrote. “Others exhorted all ‘demons to leave in the name of Christ.’“ Finally, another student arrived with a crucifix and cast the spirit out.