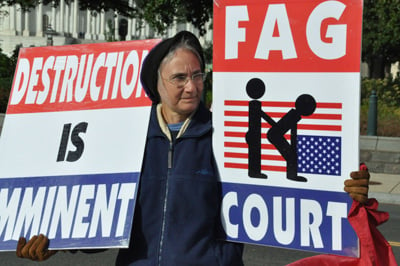 Houser had praised the Topeka, Kan.-based Westboro Baptist Church in a comment online, and church leader Benjamin Phelps said “God sent the shooter,” in a YouTube video in response to Jindal’s order. The church is known for its “God hates fags” website (which says God is punishing America) and its picketing at the funerals of U.S. service members. Though the church threatened on Twitter to protest at the two Lafayette victims’ funerals, the group ultimately didn’t show.

But the ordeal raises a question: If Westboro members had protested, would their picketing be protected as free speech? And, if so, did Jindal’s executive order infringe on the church’s First Amendment rights? Some experts suggest that the law is unclear.

This isn’t the first time the controversial church has raised questions about freedom of speech. After Westboro Baptist Church protested the funeral of Lance Cpl. Matthew Snyder, who died serving in the Marines in Iraq in 2006, his father, Albert Snyder, sued the church and former pastor, Fred Phelps, who died last year, for emotional distress, among other things, in 2011.

Though a jury in the U.S. District Court for the District of Maryland ruled that Snyder should receive damages, the Fourth Circuit Court of Appeals later reversed the judgment, a decision that was ultimately upheld by the Supreme Court in Snyder v. Phelps.

Vanderbilt University Law School professor and First Amendment expert David Hudson Jr. noted that Chief Justice John Roberts made an important point during the case: “Speech is often provocative and the First Amendment protects a great deal of disagreeable and even repugnant speech.”

“That’s a good precedent for Westboro Baptist Church,” Hudson said in an interview.

That said, Louisiana is one of 44 states with laws restricting funeral picketing, many of which were created directly in response to Westboro Baptist Church, Hudson said. So technically, Jindal’s executive order called on the police to enforce an existing state law. The law says that protesters must be 300 feet away from a funeral and they cannot disrupt it; they can protest only until two hours before a funeral starts and two hours after it ends.

So, the executive order would seem to just reinforce state law. But it may be problematic for two reasons:

According to Marjorie Esman, executive director of the ACLU Foundation of Louisiana, Jindal selectively applied the funeral-picketing law. By issuing an executive order telling police to enforce the law specifically against the Westboro Baptist Church, she argued, Jindal singled out the group.

“What the governor did is essentially say, ‘We don’t like this religion and we’re not going to allow them’ and that is in total violation of the First Amendment,” Esman said.

The second issue is that there’s debate over whether state funeral-picketing laws are constitutional.

On one hand, there are compelling reasons for the laws. Funeral-picketing laws are, in essence, “not unreasonable,” Esman said. “The law exists to protect, really, both sides — the participants in the funeral and the protesters.”

But courts are not so sure. In Snyder v. Phelps, the Supreme Court specifically stated that it was not ruling on the constitutionality of funeral-picketing laws, but “the federal courts are actually split,” Hudson said.

“The Westboro Baptists could probably challenge the constitutionality of that law — and they may or may not be successful.”