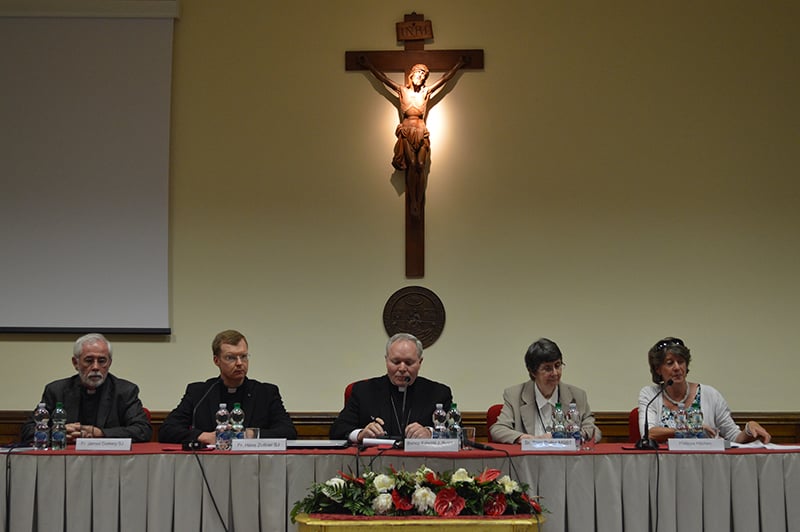 Left to right: The Rev. James Corkery, theology professor at the Pontifical Gregorian University; the Rev. Hans Zollner, president of the Pontifical Gregorian University’s Centre for Child Protection; Bishop Edward J. Burns, chairman of the U.S. Conference of Catholic Bishops’ committee on child protection; Sister Sara Butler, president of the Academy of Catholic Theology; and Philippa Hitchen, journalist at Vatican Radio, speak to the press during a conference on how to handle the current clergy sex abuse crisis. Religion News Service photo by Rosie Scammell

ROME (RNS) As the Vatican continues to work on policies to combat clergy sex abuse, a leading pontifical university in Rome hosted a conference this week on how the Catholic Church can better address the current crisis and released details of a new diploma program on protecting children.

A series of measures pushed through in recent months by Pope Francis has given Vatican officials new tools for dealing with child molesters within the church, but critics argue that the Holy See has been too slow to act on scandals globally.

In the latest such move, the Vatican set a July trial date for Jozef Wesolowski, a Polish ex-archbishop who stands accused of abusing children while ambassador to the Dominican Republic. He will be tried in a Vatican criminal court, an unusual step.

That announcement came just days after the pope approved the Vatican’s first system for judging bishops who fail in their duty to protect children from abusive clerics, a plan proposed by the papal commission that Francis set up to tackle sexual abuse.

As new policies are implemented at the Vatican, similar discussions are underway in Rome and around the world.

The four-day conference at Pontifical Gregorian University — a top Jesuit-run school sometimes known as “the pope’s Harvard” — brought the debate to the heart of Rome.

Speaking on Wednesday (June 24) at the end of the conference, Bishop Edward J. Burns of the Diocese of Juneau, Alaska, who is chairman of the U.S. Conference of Catholic Bishops’ committee on child protection, said participants had “acknowledged that the sacred has been twisted by evil.”

“That is to say, the sacred lives of innocent children have been abused,” he went on. “We used these days to strategize on how we can improve our work, in creating a safe environment in our church for our children, our youth and those who are vulnerable.”

Some 70 participants from countries around the world also looked back into church history for lessons, with Sister Sara Butler, president of the U.S.-based Academy of Catholic Theology, telling journalists that efforts had been made to tackle the scourge of clerical abuse a thousand years ago.

“This was a successful reform movement in the 11th century which is a kind of model for what we are doing today,” she said.

Reflecting on present-day progress, the Rev. Hans Zollner, a Jesuit priest and president of the university’s Centre for Child Protection, said that despite some resistance the Catholic Church has “grown more proactive” in recent years.

“Worldwide, especially in those countries where the scandals hit most — many of the Anglophone countries — the church has done a lot,” he said. “But in all this, the very first response was often defensive, and in some cases, is still now defensive.”

Zollner is trying to establish best practices for child protection officers working with Catholic institutions by establishing a diploma course in the safeguarding of minors.

“We are happy that from February 2016 we will open this possibility for a number of people. We hope to address this course especially to people who come from countries where there are no or very little such initiatives, especially in Asia, in Africa and in Latin America,” he said.

The one-semester residential course will focus on areas such as recognizing signs of abuse, helping survivors and developing prevention programs.