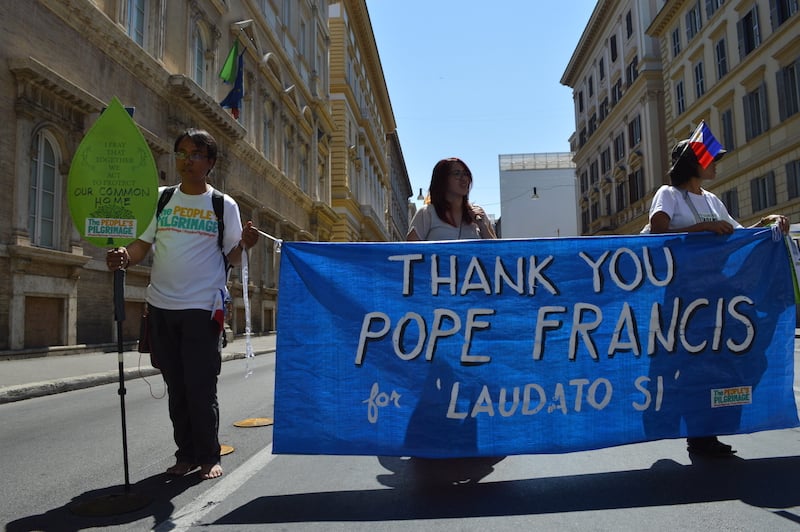 ROME (RNS) Religious leaders from across the globe led a “Many Faiths — One Planet” march to the Vatican on Sunday (June 28), to show their support of Pope Francis’ groundbreaking environmental encyclical.

Organizers estimated a crowd of 5,000 people reached St. Peter’s Square to celebrate the pontiff’s tough stance on climate change, after parading through Rome under a canopy of painted banners.

The event came 10 days after the release of Francis’ encyclical, in which he rallied against rich nations for their feeble response to climate change. The letter served as a rallying cry to faith groups and environmental organizers, uniting them ahead of a U.N. summit in December at which leaders are due to decide on climate change action. 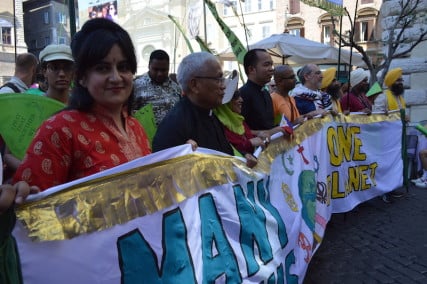 The environment will stay at the top of the Vatican agenda this week, as the Holy See hosts a high-level conference examining the papal letter.

The popularity of Francis’ call to action was visible in the crowds marching through Rome on Sunday, aiming to further raise the profile of the pontiff’s environmental campaign.

The Rev. Fletcher Harper, executive director GreenFaith, a N.J.-based interfaith organization that trains people to be environmental leaders, said he saw the march as an opportunity to appeal to politicians.

“We want to show that there’s a spontaneous expression of support from people of all different faiths, for the message of the encyclical. We want to call for climate action from world leaders — they need to do their job.”

The interfaith element of the pope’s environmental message was reflected in the diverse range of religious leaders present.

Rabbi Lawrence Troster of New Jersey said the march was one of the most diverse in his 30 years of environmental campaigning.

“It just shows that despite our differences we can come together on this universal human crisis,” he said. “I think that the pope addressed the encyclical to people from the whole earth and so many of the things that he said resonate within my Jewish faith.”

Nana Firman, an Indonesian Muslim based in California, said she wanted the pope’s message to be carried by those of her own faith. Rabbi Lawrence Troster, from New Jersey, addresses marchers outside the French embassy in central Rome during a “Many Faiths — One Planet” march to the Vatican on June 28, 2015. Religion News Service photo by Rosie Scammell

“Based on my tradition in Islam, taking care of the earth is just part of worship,” she said.

“Muslim leaders have to step up and do something, engage with world leaders to make a decision that we are going to have a future for the next generation,” she added.

While Catholics and other faith groups made up a large part of the march, secular organizations also had a strong presence. Giuseppe Onufrio, executive director of Greenpeace Italy, welcomed the pope’s intervention as “a very important moral endorsement” of the group’s campaigning.

“Greenpeace has for years said we have an ethical issue at the center of climate change,” he said. “The pope’s message is welcome because it’s a moral message that asks everyone to take a position. We are very happy to have read the encyclical as a turning point for the climate debate worldwide.”