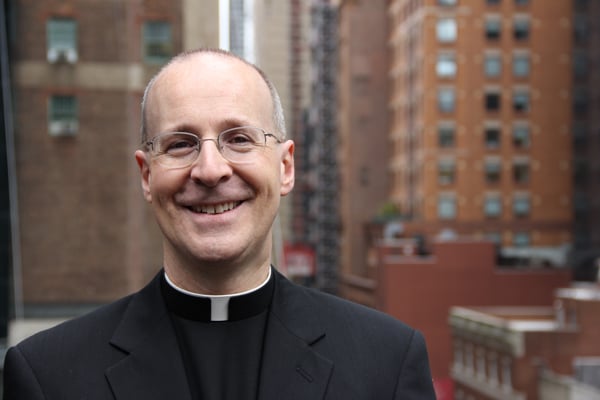 The Rev. James Martin, a Jesuit priest, editor at large of America magazine and the author of many books. Photo by Kerry Weber, courtesy of James Martin

The Supreme Court decision legalizing gay marriage brought the predictable wave of responses, of jubilation and despair, and a lesser amount of sober commentary. And there was also the predictable, but still overwhelming, storm of social media, and the attendant backlash, especially from religious voices.

The Rev. James Martin is a Jesuit priest and popular author who we regularly cite at Religion News Service, and he felt so moved by the nastiness that he wrote a brief Facebook decrying the fact that, as he put it, “No issue brings out so much hatred from so many Catholics as homosexuality.”

“Even after over 25 years as a Jesuit, the level of hatred around homosexuality is nearly unbelievable to me, especially when I think of all of the wonderful LGBT friends I have,” he wrote.

Then he hit “post,” and whoa, the online mob went out and proved him right.

Martin has an impressive following on both Facebook and Twitter but even he seemed stunned at the reaction: Nearly 18,000 comments — many sharpy critical — 140,000 shares, almost 400,000 “likes,” and about 28 million — yes, million — views — and climbing.

Here is a recent screen shot of the post: 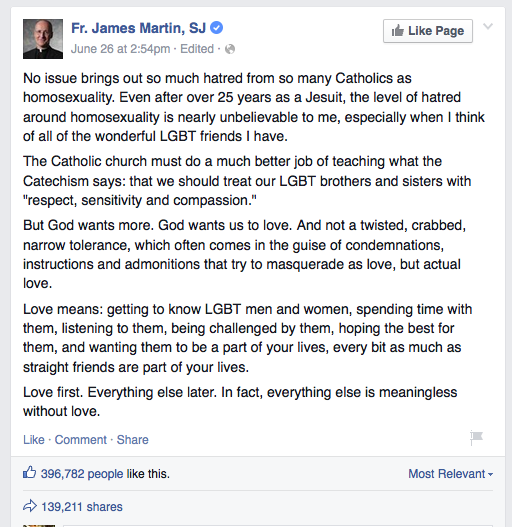 Was what he said that controversial? Is it because he is a Catholic priest? Or did he just happen to find the the sweet spot — or the bitter heart — of a digital hurricane?

Over at CatholicCulture.org, another RNS fave, editor Phil Lawler, wrote a commentary on Martin’s lament wondering if he was overreacting: “So is sarcasm now prima facie evidence of hatred?” Lawler wrote.

“In my own surfing through the internet, reading scores of posts on the Obergefell decision, I can honestly say that I did not see a single message, a single comment, that struck me as hate-filled. Perhaps Father Martin’s email traffic is qualitatively different from mine. Or perhaps—far more likely, I’m afraid—he sees ‘hatred’ where I see only vehement disagreement.”

Father Martin’s comments showed he wasn’t upset with the Supreme Court ruling, so he has to expect such blow back, Lawler concluded:

“We can speak the truth. Yes, certainly we should avoid making unduly provocative statements. But since we are trying to provoke reactions, we cannot pull all our punches … More to the point, if we’re going into battle—and we are—we need to know who’s on our side, and who’s working against us.”