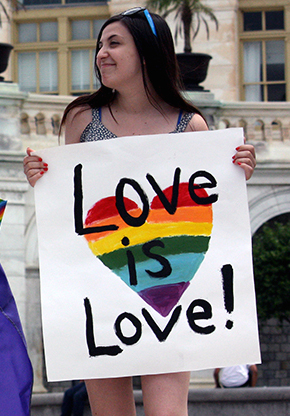 Amy Joslin carried this sign at a rally before the U.S. Supreme Court in June, 2014, a year before the historic decision. RNS photo by Heather Adams

The first wail of mourning that I ever heard in my life was at my great-aunt Trudy’s funeral.

For forty-five years, my great-aunts, Trudy and Charlotte, lived together. They shared a small, plainly furnished apartment on the Grand Concourse in the Bronx, long after the neighborhood had changed from the being the Jewish Champs D’Elysee to something much different.

We often went there for Sunday dinner, braving the traffic on the Cross Bronx Expressway. Charlotte was my mother’s aunt, the younger sister of my grandmother. Trudy was her -– well, actually no one ever labeled her, or their relationship. They were always simply the tantes (aunts). When I was a young child, I asked them, innocently, why they had never gotten married. I meant, of course, to men -– which is precisely how they responded: “No man ever wanted to marry us.”

That was it. What was the term back then? “Spinster?” “Old maid?”

Aunt Trudy became sick with cancer. Charlotte cared for her until she died. At her funeral, I heard Charlotte’s wail of grief which still pierces my bones. As the funeral began, the funeral director escorted Charlotte out to the chapel –- as, in the decades hence, I have seen funeral directors escort grieving spouses out, over and over again.

As the pall bearers were carrying Trudy’s coffin out into the hearse, my mother wondered aloud: “I wonder if Trudy’s family will be here.”

To which I replied: “I thought that we were Aunt Trudy’s family.”

Fast forward twenty years. I was already a rabbi. When I visited Aunt Charlotte in the nursing home, I noticed that her siddur (prayer book) was in tatters. I offered to replace it for her. She demurred: “Thanks, Jeff, but this one has Trudy in it.” It had been Trudy’s, and Charlotte could not bear to part with it.

Fast forward ten years after that. The waves of social change that were sweeping across America got me thinking. Were Charlotte and Trudy more than simply “roommates?”

When I tentatively broached the subject to various relatives, they shrugged their shoulders. My aunts had moved in together during the Depression; they lived together out of economic necessity. A cousin recalled that there were twin beds in their bedroom. Yes, well, Ozzie and Harriet also had twin beds. It didn’t prove or disprove anything.

And so, I constructed a story for myself. I came to imagine the context of my mother’s stray query: “I wonder if Trudy’s family will be here.” I imagined that, yes, they had been lovers and partners. When they moved in together, Trudy’s family could not handle that truth (so I imagined, or invented), and they had cut off all contact.

If that were, indeed, true, then it meant that my maternal grandparents had unequivocally opened their home and their hearts to this couple. They made no separation between themselves, and Charlotte and Trudy. Neither had anyone else in the family.

I tell this story for obvious reasons. As the Supreme Court made its momentous decision to recognize same-sex marriage , I am thinking of the spiritual descendants of Charlotte and Trudy, who are now free to legally bind their lives together.

Sixty percent of Americans accept gay marriage.  The same-sex marriage movement has been the fastest social and cultural revolution in history.

The love and devotion that Charlotte and Trudy showed to each other was a major part of my childhood. It not only did me no harm. It did me great good. It provided me and my family with yet another example of a devoted couple who took care of each other.

For that’s how this movement became the fastest revolution in history. It’s not only that politicians decided that they didn’t want to be on the wrong side of history. It is also that they, and we, came to realize: we’re talking about my son, daughter, niece, nephew, colleague, pastor, plumber — and aunts.

This has been one of the most disconcerting, and emotionally vigorous weeks, in American history. The shots fired in Charleston didn’t provoke a race war; quite the opposite. The bullets kept going and ultimately began to tear into the Confederate flag.

A whole lot of Americans just got a little freer.

I would like to believe that Charlotte and Trudy are in the World to Come, applauding and dancing.