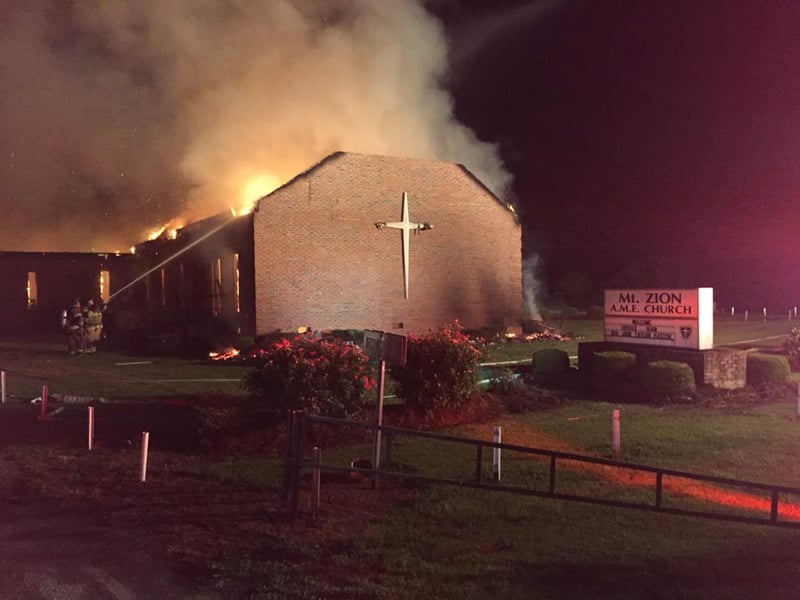 Fire crews try to control a blaze at the Mt. Zion African Methodist Episcopal Church in Greeleyville, South Carolina in this June 30, 2015 handout photo. The African-American church, which was burned down by the Ku Klux Klan 20 years ago, was the scene of another blaze on Tuesday, officials said, though the cause was not immediately clear. The fire comes amid a rash of fires that have erupted at black churches across the U.S. south, at least two of which have already been declared as deliberate. Photo courtesy of REUTERS/Clarendon County Fire Department/Handout via Reuters
*Editors: This photo may only be republished with RNS-CHURCH-FIRES, originally transmitted on July 1, 2015.

Although arson is blamed for at least three fires over the past two weeks at several predominantly black churches in Southern states, a blaze that destroyed Mount Zion African Methodist Episcopal church in South Carolina was not deliberately set, according to a federal source, the Associated Press reported Wednesday.

Churchgoers had feared the worst because the church in Greeleyville, S.C., was burned to the ground by the KKK in 1995. The latest fire broke out Tuesday during a night of frequent storms and lightning strikes.

Preliminary indications are that the fire was not intentionally set and was not arson, the source said, according to the AP. The official spoke on condition of anonymity because he was not authorized to discuss the case publicly. The fire is still under investigation, the official said.

The fire has rekindled painful memories from the arson that destroyed the church 20 years ago, Williamsburg County Councilman Eddie Woods Jr., told the AP.

“That was a tough thing to see,” Woods said. “It is hurting those people again. But we’re going to rebuild. If this was someone, they need to know that hate won’t stop us again.”

The fires in Southern states have all taken place in the weeks since a white gunman opened fire in the Emanuel AME Church in Charleston, killing nine people, on June 17.

The church fires have erupted in Florida, Tennessee, North Carolina and South Carolina. Federal investigators are looking into some of the cases to determine whether hate crimes were the cause, but so far the fires do not appear to be related.

The timing of the recent fires, coming in the wake of the Charleston shooting, could be a cause for concern, said Mark Potok of the Southern Poverty Law Center. They may be retaliation for the backlash against the Confederate flag that followed the shootings, he said.

After photos surfaced of Charleston shooting suspect Dylann Roof holding Confederate flags, retailers like Walmart and Amazon suspended sales of the flag, which are popular with white supremacists. Four of the rebel flags were recently removed from the state Capitol grounds in Alabama, and South Carolina lawmakers will decide whether to follow suit next month.

Websites popular with white supremacists, such as Stormfront.org, posted angry denouncements of the treatment of the Confederate flag, Potok said.

“The single most suspicious thing about these fires is that they came so close together and so hard on the heels of attacks on the Confederate battle flag,” Potok said. “That is a revered symbol for the radical right.”

Some of the church fires were severe, such as the one last week at Briar Creek Road Baptist Church in Charlotte, which gutted an entire church wing.

Others, such as the fire at College Hill Seventh-day Adventist Church in Knoxville, Tenn., were less damaging. Firefighters arrived at that church at around 10 p.m. June 21 to find a church van in flames in the parking lot and smoldering piles of hay and bags of soil near a side entrance, said Capt. D.J. Corcoran, a spokesman with the Knoxville Fire Department.

There were no obvious signs pointing to a hate crime, and the property was mostly unhurt, he said. The incident remains under investigation.

Potok said he is waiting on results of the investigations before drawing connections between the fires and the Charleston shooting. There has been a history of church fires after major events.

Hours after Barack Obama was elected as the nation’s first black president in November 2008, arsonists torched the predominantly black Macedonia Church of God in Christ in Springfield, Mass.

AME Church leaders, who were meeting in New Orleans this week, said investigations into the cause of the Greeleyville, S.C., church fire will continue.

“However the AME Church is preparing its local congregations to set up safety watches and take preventative measures to protect human life and physical assets,” they said.