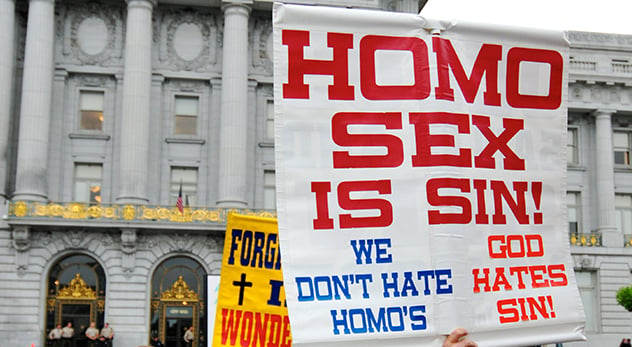 Often the losers knit together a version of past events that disposes of the more damning details and casts their side in a more favorable light. Expect social amnesia as Christians debate sexuality. – (Image courtesy of Dave Schumaker – http://bit.ly/1KweZJq)

History is not always written by the victors. Often the losers knit together a version of past events that disposes of the more damning details and casts their side in a more favorable light.

In the 1970’s, UCLA history professor Russell Jacoby studied trends in the collective forgetting of groups of people. He dubbed it “social amnesia.” Others since then have also noted the tendency of groups to collectively repress history, usually because remembering the facts is not in the group’s best interest.

On the day of the decision, I posted a satirical tweet about how millions of straight conservative Christians were shocked to discover their marriages had not actually been harmed by the Supreme Court’s decision. Some conservatives responded that this was “straw man” and a “bogus red herring.” They contended that conservatives never made such arguments. Karen Swallow Prior, an author and professor at Liberty University whom I respect, objected that “no conservative Christians ever made that argument.” Another said I was “mocking an argument that no one is making.”

But there are plenty examples of such arguments being made by high-level conservative Christian leaders in recent history. And they are easily accessible via a global information search engine that researchers are now calling “Google.” To wit:

– A pamphlet produced by the Family Research Council argued that if gay marriage were legal, fewer married people would “remain monogamous and sexually faithful.” It went on to say, “Worse than this, people would be more likely to get divorced after gay marriage is legal.” And because tragedy always comes in threes, the pamphlet adds that legalizing gay marriage would result in “lower birth rates than if it had not been legalized.”

– In 2010, Bishop Harry Jackson penned an article at CNN.com titled, “Same-sex marriages will hurt families, society” in which he stated, “Advocates of making same-sex marriage a legally recognized right claim that this will have no impact on traditional marriage — that it can peacefully coexist alongside traditional marriage. On the contrary, it will have profound impacts.”

– In 2013, Dr. John Barber, a teaching elder in the Presbyterian Church in America denomination offered “Ten reasons why ‘same-sex marriage’ affects your marriage.” He claimed that gay marriage “reduces the worth” of straight marriage, “challenges the nature” of straight marriage, and “makes the concept of husband and wife irrelevant in your marriage” among other things.

– In 2014, the Ethics and Religious Liberty Commission (ERLC) posted an article on their website written by a college professor named Denny Burk titled, “How gay marriage will impact your marriage.” It offered an ominous warning: “legal gay marriage could hurt straight marriage in ways that people never anticipated.”

– Mark Regnerus, a favorite sociologist of Christians on the right, penned a lengthy article for The Witherspoon Institute titled, “Yes, Marriage Will Be Changed—And Here’s How.” He wrote, “This, I predict, will be same-sex marriage’s signature effect on the institution—the institutionalization of monogamish as an acceptable marital trait. No, gay men can’t cause straight men to cheat. Instead, the legitimacy newly accorded their marital unions spells opportunity for men everywhere to bend the boundaries. Dan Savage will be proud.”

These leaders were invited to speak at major churches, Christian conferences, and religious colleges without protest from the faithful. Their organizations were—and in some cases, are—funded on the scale of tens of millions of dollars per year. So how have their comments been forgotten so quickly? It’s not that conservatives are denying the existence of arguments they know were made by the organizations to which they pledge allegiance; rather, they have collectively (and conveniently) forgotten that such arguments were made. As gay marriage becomes less taboo in American culture, you can expect this trend to continue.

In the days ahead, you’ll hear many Christians crying about “militant gays” and “liberal bullies” in the days to come. But examples of militant, bullying Christian extremism will be absent from their speeches. They’ll forget they supported damaging ex-gay therapies. They’ll disavow leaders like Tony Perkins and Jerry Falwell, pretending that they were created by CNN and not catapulted into the social stratosphere through their donated dollars. They’ll never mention that their sermons once stated that HIV/AIDS was God’s judgment on LGBT persons, or spoke of sexual minorities like disgusting deviations of the human species. They’ll forget all about how their leaders pressured politicians to block or reduce funding for AIDS research—actions that contributed to countless deaths of LGBT persons. They’ll preach from their pulpits that repentance and confession for past mistakes is necessary for healing, all the while failing to do either.

Do not expect to hear conservatives mention that the still-revered Presbyterian pastor D. James Kennedy he once reacted to a notion of gays serving in the military by sending out a letter asking, “Honestly, would you want your son, daughter, or grandchild sharing a shower, foxhole, or blood with a homosexual?”

Do not expect them to recall that Ten Commandment crusader and Alabama Judge Roy Moore called homosexuality an “abhorrent, immoral, detestable crime against nature” that should be punishable by law.

Do not expect them to tell you that Family Research Council Tony Perkins claimed that the “homosexual movement” is actually responsible for gay youth suicides. Or that his orgnization gave its highest award to a man who compared LGBT persons to maggots and murderers.

Do not expect them to make mention of how one of their favorite historians, David Barton, once asked, “Why don’t we regulate homosexuality?” comparing gay men and lesbians to trans-fats, fast food, cigarettes, liquor, and salt.

All of these stories will have been collectively forgotten, replaced by stories of grandmother bakers penalized for not providing cakes to LGBT couples.

If conservative Christians want to engage these conversations honestly, they must begin by remembering their own past and repenting of their sins. They must own the role they played in promoting reparative therapies, blocking political solutions to the AIDS crisis, and contributing to depression that led to gay youth suicides. And they must admit their collective silence when they and their leaders spoke of LGBT persons as if they were scars on the face of an otherwise beautiful human population.

A Palestinian poet once wrote, “If you want to dispossess a people, the simplest way to do it is to tell their story and to start with ‘secondly’.” As conservative Christians attempt to preserve their beliefs on sexuality amid a rapidly shifting landscape, they will tell many stories that begin with “secondly.” In those moments, it is incumbent on the rest of us who haven’t forgotten the facts to clear our throats, open our mouths, and remind them of the “firstly.”

[tweetable]When it comes to history, forgetting the facts is a most dangerous delusion.[/tweetable]