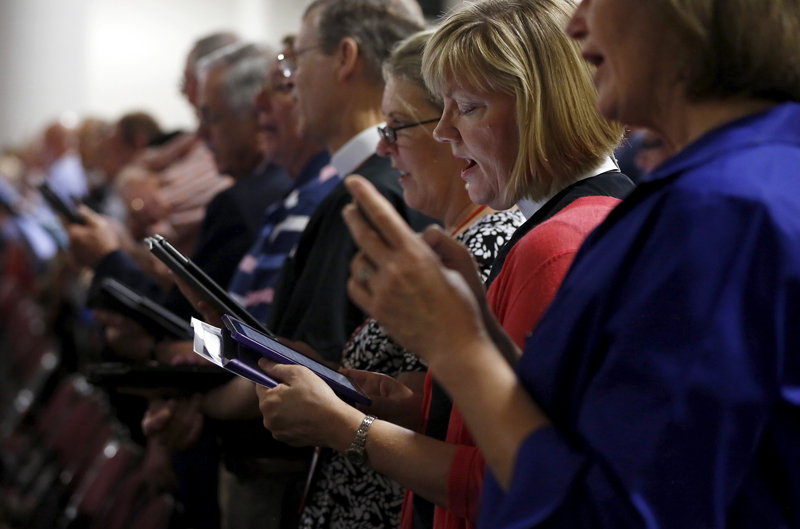 Members sing at a church service during the General Convention of the Episcopal Church in Salt Lake City on Sunday (June 28, 2015). Photo courtesy of REUTERS/Jim Urquhart
*Editors: This photo may only be republished with RNS-RUSSELL-COLUMN, originally transmitted on July 2, 2015.

SALT LAKE CITY (RNS) By an overwhelming majority in both of its legislative houses, the Episcopal Church made history Wednesday (July 1) by making marriage for same-sex couples available throughout the church.

The actions on marriage equality came after decades of progress toward fully including LGBT Episcopalians in the work and witness of the church.

Meeting in Salt Lake City for its 78th General Convention, the House of Deputies concurred with the House of Bishops to approve a canonical change that eliminates a written definition of marriage as between a man and a woman and authorizes two new marriage rites for same-sex or opposite-sex couples.

Taken together, these actions make marriage — which the Supreme Court ruled last week is a “fundamental right” for all Americans — equally available for all Episcopalians.

Carefully and prayerfully crafted, the changes provide as wide a tent as possible for the historic diversity that characterizes the Episcopal Church — guaranteeing access to marriage liturgies to all couples while protecting the conscience of clergy and bishops who dissent theologically.

The genius of these actions by the Episcopal Church is that the conscience of a dissenting bishop is protected but not at the price of denying same-sex couples access to the sacramental rite of marriage.

It will be a “bridge too far” for some and not far enough for others. But it is exactly that kind of comprehensiveness that is in our DNA as Anglicans.

We are a people of God who emerged from the crucible of the Reformation holding the tension of being both catholic and Protestant in the 16th century.

The decisions this week on marriage equality are an exemplary illustration of the hard, faithful work of a church refusing to let the perfect be the enemy of the good as it strives to become a more expansive and inclusive church in the 21st century.

These actions are the result of a conversation launched when the 1976 General Convention said that “homosexual persons are children of God who have a full and equal claim with all other persons upon the love, acceptance and pastoral concern and care of the church.”

The Episcopal Church has spent the last 40 years striving to make that resolution a reality. 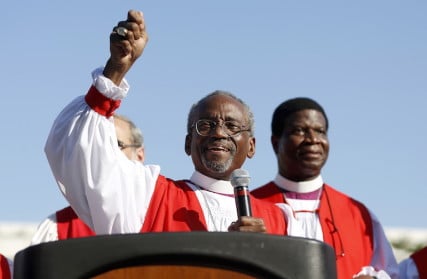 Bishop Michael Curry led marchers through the streets to protest against gun violence as part of the Episcopal Church convention in Salt Lake City on June 28, 2015. Curry was elected as the first African-American presiding bishop during the General Convention of the Episcopal Church, which is held every three years in different cities around the country. Photo courtesy of REUTERS/Jim Urquhart
*Editors: This photo may only be republished with RNS-RUSSELL-COLUMN, originally transmitted on July 2, 2015.

In 2015 our challenge to the church was framed in Jesus’ words from the Gospel according to Matthew (5:37) “Let your yes be yes.” And the response of this General Convention — in the overwhelming majority votes in both houses resulting in both canonical change and equal access to liturgical rites — was not just an affirmation but an acclamation that we are indeed ready to put the “inclusion wars” behind us and to move forward in the work and witness of proclaiming God’s inclusive love.

There is still work to do to reach the audacious goal of a church where there are no barriers to full inclusion for any member — but today we celebrate an important and incremental victory toward that goal.

It is a proud day to be an Episcopalian as we journey together into God’s future — a diverse people united in our commitment to the Jesus Movement that our Presiding Bishop-elect Michael Curry has called us to claim and to proclaim to a world hungry for love, justice and compassion. Susan Russell is the senior associate for communications at All Saints Church in Pasadena, Calif. She served on the task force that studied the marriage changes in the Episcopal Church. Photo courtesy of All Saints Church

(Susan Russell is the senior associate for communications at All Saints Church in Pasadena, Calif. She served on the task force that studied the marriage changes in the Episcopal Church.)