A man waves a rainbow flag on Sunday (June 28, 2015) while marching in the San Francisco gay pride parade two days after the Supreme Court’s landmark decision that legalized same-sex marriage throughout the country. Photo courtesy of REUTERS/Elijah Nouvelage
*Editors: This photo may only be republished with RNS-ABORTION-MARRIAGE, originally transmitted on July 2, 2015.

(RNS) In the wake of the landmark Supreme Court decision legalizing gay marriage, a favorite talking point among social conservatives was that even if they lost a battle, they could still win the war: The ruling in Obergefell v. Hodges was akin to the 1973 Roe v. Wade verdict legalizing abortion, they argued, and opponents would continue to fight, and steadily work their way back to victory.

There are several obstacles to that scenario, however. Here are some of them:

1. Abortion and gay marriage are not the same.

“Though many evangelicals oppose abortion and gay marriage as violations of natural law, they are significantly different issues with different social consequences,” Liberty University professor and popular evangelical author Karen Swallow Prior wrote in Christianity Today.

Most important, gay marriage does not end a life in the womb and, Prior said, “unlike abortion, gay marriage remains an act rooted in love.”

Many agree, and they won’t take to the streets to fight gay marriage the way they would to oppose abortion.

2. Gay marriage aims to expand a tradition, not destroy it.

Same-sex marriage supporters — and the five justices who backed a right to gay marriage — also see the Obergefell decision as promoting family life, not undermining it.

“Gay people are joining a social institution that heterosexuals have often made a hash of and just as it is fading among some social groups,” wrote The Washington Post’s Michael Gerson, an evangelical Christian. “It is a form of gay rights that Middle America,” Gerson added, “could readily embrace.”

Without Middle America, which provides much of the firepower for the anti-abortion lobby, it’s hard to see where activists will find troops for a movement against gay marriage.

The reaction to the Obergefell decision among conservative Christians was relatively muted and modulated, and that reflects a data-driven reality: Americans have moved to accept gay marriage with astonishing swiftness —  almost 60 percent of Americans approve, with the younger generation set to drive that figure even higher.

The increase is occurring among religious groups as well: Catholics who have been the heart and soul of the movement to overturn Roe are among the most accepting of gay marriage, and support is even increasing steadily among their staunchest allies in the anti-abortion fight, evangelical Protestants. 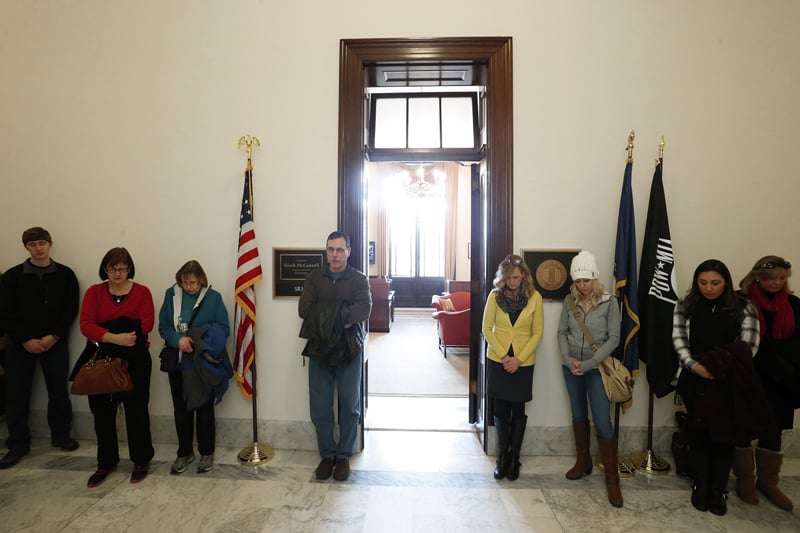 Polling on abortion over the past several decades, on the other hand, has remained remarkably steady, with Americans basically split between the “pro-life” and “pro-choice” camps; also, most Americans continue to express ambivalence about the morality of abortion and the extent that abortion should be available. That ambivalence hasn’t carried the day for the anti-abortion movement, but it has provided space for many significant victories.

4. The Supreme Court largely agrees with most Americans.

A striking aspect of the four dissents is that the justices who disagreed with Justice Anthony Kennedy’s majority opinion did not argue that gay marriage was unlawful, or even necessarily a bad thing. They basically said that the U.S. Constitution did not justify the high court’s establishing the precedent; states were free to legalize gay marriage, they said, as some have done.

“The law can recognize as marriage whatever sexual attachments and living arrangements it wishes,” wrote Justice Antonin Scalia in his eminently quotable dissent. “It is not of special importance to me what the law says about marriage.”

In other words, it was the process, not the principle, that was a problem. But that’s also a problem for social conservatives who want to rally Americans to reverse gay marriage. “What is there for the rest of us to say but, ‘All is lost,’” Edward Peters, a Catholic canon lawyer, wrote in a blog post blasting Scalia, who is known for his Catholic orthodoxy.

5. Legally, gay marriage is either/or. Abortion is not.

Yes, Roe legalized abortion, but within certain parameters. That has allowed abortion opponents to organize campaigns around a whole host of issues related to abortion laws — parental consent, clinic access and oversight, taxpayer funding, fetal pain and viability and the like.

That has also allowed opponents to claim periodic victories that hearten the faithful and spur further activism even as outlawing abortion altogether remains out of reach.

But gay marriage is either legal or it’s not. After Obergefell, conservative concerns have centered on establishing religious freedom protections for believers. That may galvanize an influential cohort on those issues, but it’s not going to overturn gay marriage.

One of the most common strategies for reversing the acceptance of gay marriage post-Obergefell was for believers to “embody a gospel marriage culture,” as Russell Moore, a leading Southern Baptist, put it.

If traditional believers join in lifelong monogamous marriages — as they have too often failed to do, Moore stressed — they can change the culture, “and picture to the world what marriage is meant to be.”

Yet what’s not clear is how promoting happy marriages among straight couples would thwart gay couples from marrying.

In the end, the success of the gay marriage movement may depend not on heterosexuals, whether they are conservative believers or not, but on gay couples themselves, and whether they can make marriage and family life work.

“We have no idea if gays will do better, worse or the same” as straight couples, as Gerson put it. “But they now have a chance to leave their imprint.”

An early answer may come next June 26, the first anniversary of Obergefell, and whether anti-gay marriage forces are able to bring hundreds of thousands of protesters to the National Mall in Washington the way they have in the bitter January cold every year to mark the Roe decision.