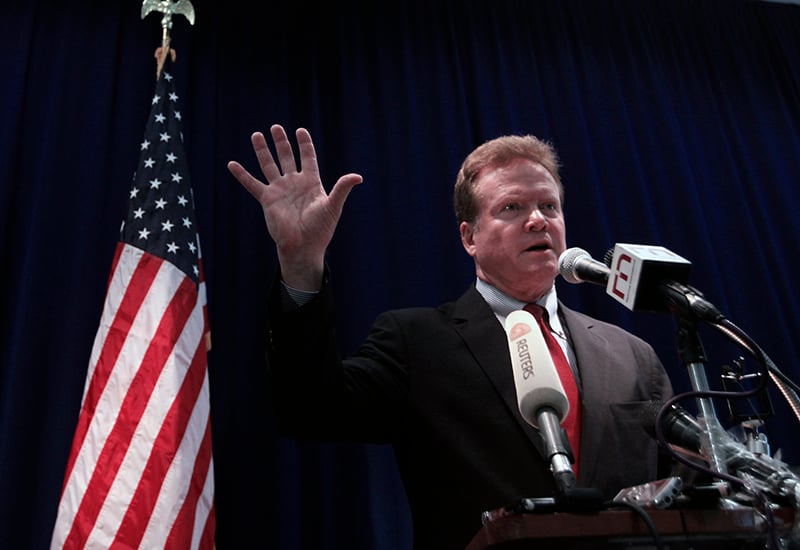 U.S. Sen. Jim Webb talks to reporters during his news conference at the U.S. embassy in Yangon, Myanmar, on April 11, 2012. Photo courtesy of REUTERS/Soe Zeya Tun
*Editors: This photo may only be republished with RNS-WEBB-FAITH, originally transmitted on July 6, 2015.

(RNS) In the letter announcing his candidacy for president last week (July 2), Virginia Democrat Jim Webb said that “outside my faith and my family, my greatest love will always be for this amazing country that for more than 200 years has given so many people the opportunity to have a good life, raise a family, live in freedom, and achieve their dreams.”

But that “faith” Webb speaks of loving is hard to pin down.

The former U.S. senator, 69, was elected in 2006, then chose not to seek re-election in 2012 and retired at the end of his Senate term. He is now the fifth Democrat in a 2016 presidential race already populated by Hillary Clinton, Bernie Sanders, Lincoln Chafee and Martin O’Malley — plus 14 Republicans so far.

VoteSmart.org lists his religion as “Protestant.” But the only reference to any church that turns up on a web search is his residence in the Northern Virginia suburb of Falls Church.

Still, Protestantism appears to be a deeply held ancestral value. Webb’s book “Born Fighting: How the Scots-Irish Shaped America,” celebrates his heritage, and notes that even though many of his ancestors’ had Irish as well as Scottish blood, “at some point they all became Protestant.” His campaign did not respond to questions about his faith.

Under “religious, civic and other memberships” VoteSmart lists only “Member, Friends of Scotland,” an organization founded by actor Sean Connery to showcase cultural connections between the U.S. and Scotland. (It has held charity events to raise funds for veterans, an issue dear to Webb’s heart.)

Webb identifies strongly with the people of southwestern Virginia’s mountains and hollows and his brother still lives there. In “Born Fighting,” Webb waxes poetic about country music, which he says was “a way for an increasingly illiterate population to share the teachings of a Bible that many could not read.”

3. He’s probably not a Quaker.

In Webb’s official campaign website, he  proudly proclaims himself a “warrior” (as well as public servant, author and filmmaker). He has been a combat Marine, an assistant secretary of defense and secretary of the Navy (under Republican Ronald Reagan), and “(b)oth sides of Webb’s family have a strong citizen-soldier military tradition that predates the Revolutionary War.” Webb graduated from the Naval Academy in 1968, and was first in his class at the Marine Corps officer’s Basic School. He served as a rifle platoon and company commander in Vietnam and was honored with the Navy Cross, the Silver Star Medal, two Bronze Star Medals, and two Purple Hearts.  He was an expert marksman as a Marine and is a strong supporter of gun rights.

“I’m probably more comfortable inside a Marine Corps rifle company than I am anywhere in my life,” he told Washingtonian magazine in 2008.

Most of his 10 books are also about war, including “Fields of Fire,” about a Marine infantry platoon in late 1960s Vietnam. He won an Emmy Award for his PBS coverage of the U.S. Marines in Beirut in 1983. Two decades later, he was embedded with the U.S. military in Afghanistan. A movie based on his story, “Rules of Engagement,” was No. 1 at the box office for two weeks in April 2000.

If one were to try to guess at a creed Webb believes in, one that might fit the bill is the Marines’ “Semper Fi” (Always Faithful”) and its core values of honor, courage and commitment.

“I drifted away from the Democratic Party on national security issues but I never left on social issues and issues of economic fairness,” Webb has said.

He believes the evolution of gay marriage “has been a good thing for the country,” he said on “Meet the Press” on Oct. 5, 2014.

“I believe the power of the government ends at my front door unless there is a compelling reason to come inside,” a 2006 Wall Street Journal article quotes him as saying.

Webb doesn’t see anything wrong with prayer in schools. “If a minister can lead the Senate in prayer every day … what is so wrong with beginning every day of school with an ecumenical prayer?” he wrote in his 2009 book “A Time to Fight.”

5. He values family, and does pro bono work with Vietnamese immigrants.

Webb has six children and lives in Northern Virginia with his third wife, Hong Le Webb, who is 22 years his junior. At age 7, she was among Vietnamese boat people rescued by the U.S. Navy and transported to the U.S. She became a lawyer and practices in Washington, D.C.  Webb, who graduated from Georgetown University Law Center in 1975, speaks Vietnamese; his website says he has done “extensive pro bono work” with the Vietnamese community since the late 1970s.

Bonus fact: He has three tattoos.

“It’s pretty safe to say that I am the only person in the history of Virginia to be elected to statewide office with a union card, two Purple Hearts, and three tattoos,” Webb is fond of saying.