Bill Levin poses in the sanctuary at The First Church of Cannabis, on June 23, 2015. The sanctuary, still under renovation, includes a painting on the back wall of two hands passing a cannabis cigarette. The painting, by CS Stanley, the church’s minister of art, is similar to a detail of the Michelangelo “Creation of Adam” on the Sistine Chapel ceiling. Photo courtesy of Kelly Wilkinson, The Indianapolis Star.

INDIANAPOLIS — The First Church of Cannabis filed a lawsuit Wednesday (July 8) against the state of Indiana and city of Indianapolis, challenging state laws on possession and use of marijuana as infringing upon religious beliefs.

The complaint, filed in Marion County Circuit Court, contends that cannabis is the church’s sacrament and its members believe marijuana “brings us closer to ourselves and others.”

“We are taking legal action today to ensure love has no barriers in our land,” said Bill Levin, Church of Cannabis founder, in front of the Indiana Statehouse.

“Today we invite the state of Indiana and all its leaders to joyfully meet us in a court of law for clarifications on our core religious values,” he said. “We look forward to engaging them on the high plane of dignity and discipline, with love and compassion in our hearts, to find a swift and sensible answer for our questions of religious equality.”

Under the state’s new Religious Freedom Restoration Act, which took effect July 1, the government must prove it is enforcing a compelling interest in the least restrictive way if a person claims an undue burden on religious liberty. The Church of Cannabis had its first service July 1 but said its members would not use cannabis after law enforcement warned that police would arrest anyone who smoked pot.

By filing its highly anticipated religious liberty claim Wednesday, the First Church of Cannabis has put the question everyone’s been wondering about in the hands of the court:

Is this a real religion?

And does it have a protected right to practice legitimate beliefs?

Some legal experts remain skeptical that the cannabis church’s challenge of Indiana’s marijuana laws will survive for long in front of a judge. But the case focuses on — if a bit unusually — some of the weighty complexities of religious liberty claims and raises lingering questions over how Indiana’s new Religious Freedom Restoration Act can and can’t be used.

“Is this a genuine religion, or is it a pretext?” said Indiana University law professor David Orentlicher. “Because you can imagine, with anyone who’s using a controlled substance, we can’t let them all say, ‘It’s my religion.’ The court has to draw a line somewhere.”

That’s the first test in court that the Church of Cannabis faces: whether weed is part of a sincere, deep religious belief.

The Church of Cannabis contends that for its members, called “Cannaterians,” cannabis is a religious sacrament that “brings us closer to ourselves and others. It is our fountain of health, our love, curing us from illness and depression,” according to the lawsuit filed Wednesday in Marion Circuit Court.

But state laws making marijuana illegal burden that practice of religion, the church says, putting its members in danger of prosecution for using their sacrament.

(Michael Anthony Adams contributed to this report. Wang and Adams report for the Indianapolis Star.) 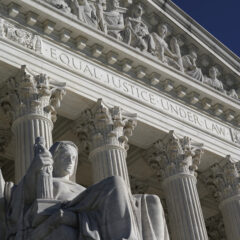