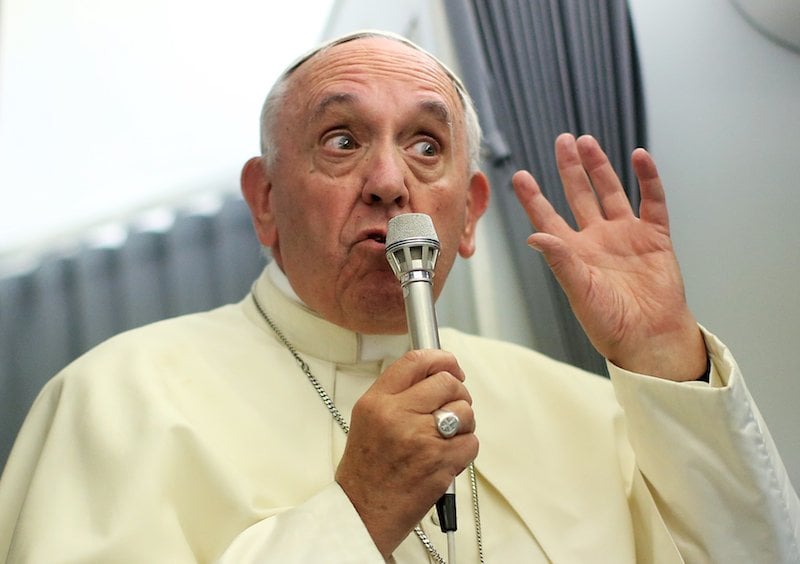 Pope Francis speaks to journalists onboard the papal plane during his return to Rome, from Asuncion, Paraguay on July 12, 2015. Photo courtesy of REUTERS/Alessandro Bianchi

ABOARD THE PAPAL PLANE (Reuters) – Pope Francis acknowledged on Monday he had neglected problems of the middle class and said he was willing to have a dialogue with Americans who disagree with his criticism of capitalism.

Francis, speaking to reporters on the papal plane returning from a grueling 8-day trip to Ecuador, Bolivia and Paraguay, also said he hoped the Greek crisis could lead to more oversight so other countries would not experience the same problems.

During the hour-long conversation with the Francis, who has made defence of the poor a major plank of his papacy, a reporter asked why he had hardly ever spoken about the problems of the “working, tax-paying” middle class.

He offered a rare papal mea culpa, thanking the reporter for his “good correction.”

“You’re right. It’s an error of mine not to think about this,” he said.

“The world is polarized. The middle class becomes smaller. The polarization between the rich and poor is big. This is true. And, perhaps this has led me to not take account of this (the problems of the middle class),” he said.

Francis said he spoke about the poor often because they were so numerous but that ordinary working people had “great value.”

“I think you’re telling me about something I need to do. I need to do delve further into this ….,” he said

The pope, who is due to visit Cuba and the United States in September, said he was willing to have a dialogue with Americans who have seen his criticism of the global economic system and capitalism as an attack on their way of life.

“I heard that there were some criticisms from the United States … I haven’t had time to study this well but every criticism must be received, studied and then dialogue must follow,” he said.

He sought to downplay the Vatican’s part in the rapprochement between Cuba and the United States, even though both Presidents Barack Obama and Raul Castro have praised him for it.

He said the Holy See had done “only small things” to facilitate the accord that led to the resumption of diplomatic relations after more than 50 years of enmity.

Asked if Cuba now risked losing parts of its identity, he said both sides would lose something but “both will gain peace, encounter, friendship, collaboration”.

He refused to be discuss Cuba’s human rights record, saying human rights were for all and that there were a number of countries, including several in Europe, where religious freedom was not totally respected.

Asked about the Greek crisis, he said “it would be too simple to say that the fault is only on one side”.

“I hope that they find a way to resolve the Greek problem and also a way to have oversight so that the same problem will not fall on other countries. This will help us move forward because this path of loans and debts, in the end, it never ends.”

Francis said he “did not feel offended” when Bolivian President Evo Morales gave him a gift of a sculpture with the body of a crucified Jesus nailed to a hammer and sickle – the symbol of communism.

The sculpture was a replica of a creation by Jesuit priest Luis Espial Camp, an artist and poet who was a strong defender of miners’ rights and was killed by a Bolivian right-wing paramilitary squad in 1980.

Francis said the sculpture should be seen as “protest art” and a product of its times, when some Roman Catholic priests were involved in forms of Liberation Theology that used Marxist political analysis to help the poor. Francis said he brought the gift back to the Vatican with him.

Several times during the freewheeling conversation that has become a standard of papal flights, he showed his humour despite signs of fatigue.

“I never tasted coca (leaves), let’s be clear about that,” he said, when asked how he managed to keep up the demanding pace at age 78. There was speculation that he might have chewed coca leaves to ward off altitude sickness in Bolivia.

He said he felt like “a great-grandfather” when young people asked to take selfies with him. “It’s another culture … I respect it,” he said.