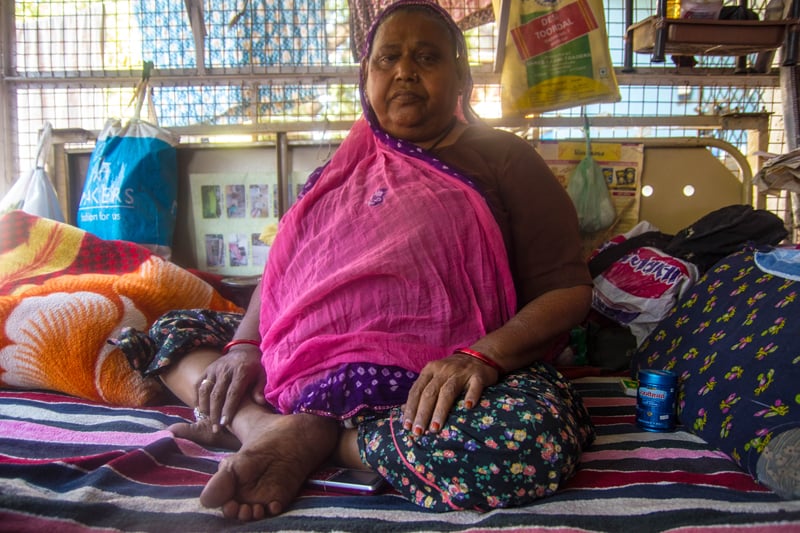 Shobha Masi, photographed on March 19, 2015, is a guru of a hijra community in Ahmedabad, India. Religion News Service photo by Yasmine Canga-Valles

Hijras, India’s “third gender,” have performed ancestral rituals and ceremonies across India for centuries without legal recognition. That changed in April 2014 when a Supreme Court ruling and the Rights of Transgender Persons Bill recognized them for the first time.

Though the new official gender category is widely considered a significant step forward, hijras who have found sanctuary in reclusive communities fear that it will prevent them from freely practicing their multifaith traditions, both in India and abroad.

“Hijras are resistant to all categories,” said Katherine Ewing, a professor of religion at Columbia University in New York and coordinator of the Master of Arts Program in the South Asia Institute.  “There is not a real orthodoxy in this community but rather a local inheritance of practices. The community was at first created because it was seen as a threat to everyday gendered order.”

Wrapped in a colorful sari, Shobha presides over her house, occasionally pausing to spit paan, a tobacco-like substance, into a small silver pot. She was born intersex (an umbrella term for conditions in which an infant’s anatomy doesn’t conform to standard definitions of male or female) and identifies as both male and female, but prefers female pronouns. She calls hijras “children of God,” physical incarnations of the divine.

The Hindu goddess Bahuchara Mata “is like our mother,” explained Shilpa, one of Shobha’s students and fellow hijras. “She gave us this form. We are well-known due to her grace. We are everything just because of her.” 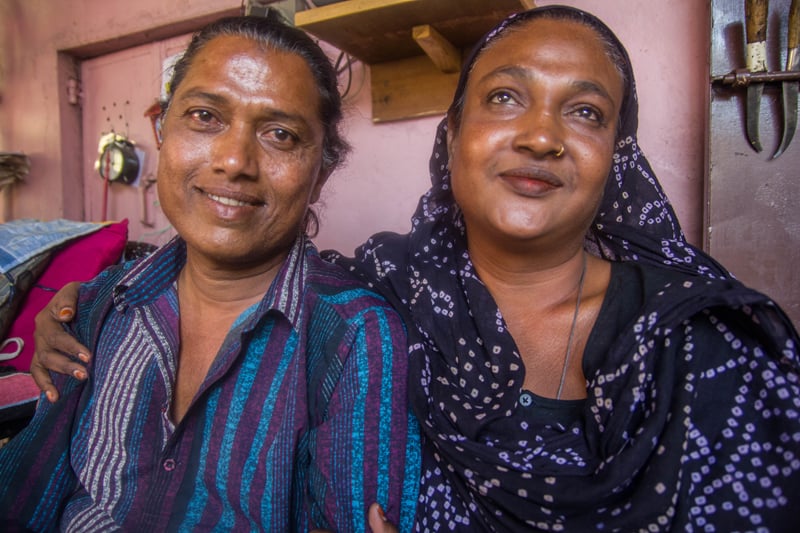 Hijras Shilpa and Joya are chelas, or students, of Shobha Masi. They have lived in this small ghetto of Ahmedabad since they were young girls. Photo taken on March 19, 2015. Religion News Service photo by Yasmine Canga-Valles

Hijras have long made a living performing rituals at births, marriages and death ceremonies for families of various religious backgrounds. Their services include singing devotional songs, dancing, playing drums and offering blessings.

“The only thing that matters to us is the happiness of all people. And (people) give us money according to their wishes,” said Shilpa.

The importance of embracing differing faiths within the hijra community is evident a few blocks from Shobha’s home. Suraya, Savitri, Sandhya and Faulan live in a house that has been passed from one Hijra guru to another for more than 150 years. Their community serves as a hub for the local neighborhood.

“We possess the minds of both male and female,” said Faulan. “We tend to have more wisdom. We don’t discriminate between religions.”

MORE: How to be a Christian ally to LGBT people

Faulan studied both Islam and Hinduism under her Hindu guru, Sandhya. The two have gone on multifaith religious pilgrimages across India to sites such as the Bahuchara Temple in Gujarat and the Sufi shrine Ajmer Sharif in Rajasthan.

In 2009, Shilpa went to Mecca to perform the hajj, or Muslim pilgrimage, a mandatory religious duty for Muslims. The Indian government had not yet recognized hijras as a third gender, so she traveled under a male name.

“The government here has accepted and recognized us as transgender,” said Shilpa. “But we will not be accepted as transgender in Saudi Arabia as it is an Islamic country. So we went there as males. We got our passports, cut our hair, kept light mustaches and wore caps. We did all of these things to visit.” Savitri, Sandhya and Faulan are brothers and gurus in the same hijra community in Ahmedabad, India. This particular community claims to be the first hijra community in the city. Photo taken on March 19, 2015. Religion News Service photo by Olivia Lace-Evans

Shilpa expressed concerns that her guru will not be able to visit Mecca now that India recognizes a third gender. If hijras like Shilpa or Joya choose to take advantage of their new legal identity, they too will be unable to travel freely for hajj.

When the transgender bill was passed last year, many promises were made. One of the major changes proposed by the government was to include a third gender column in all administrative paperwork within six months of the bill’s passing.

Kiran Tirkey, a transgender representative for the New Delhi-based Naz Foundation, said that many changes promised to the hijra and transgender communities have yet to be seen, including increased employment opportunities.

“The law has not been applied. You can see in the government sector that although job vacancies are coming, there is no column on applications for a third gender,” said Tirkey.

Until these regulations become fully enforced, the hijra community will continue to look inward for both social and religious sanctuary.

“People don’t accept us. We are what we are,” said Shobha. “We do not want to lose our history. We are, and will remain, hijras.”

(Translation for this article was provided by Maulikkumar Vikrambhai Patel.)