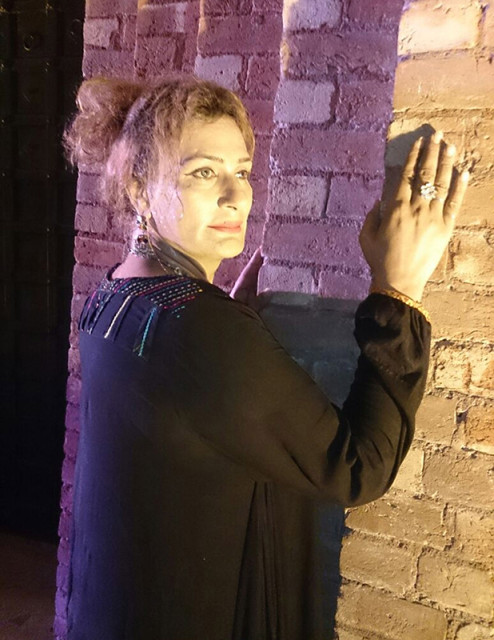 Saima Butt, supervisor at the Khawaja Sara Society in Lahore and a member of the local khawaja sara or third-gender community, poses for a portrait. Religion News Service photo by Shahbaz Sindhu

LAHORE, Pakistan (RNS) Saima Butt witnessed an acid attack in February 2014 that left the victim scarred and writhing in pain. One onlooker said the assault was God’s retribution, and that her death would mean one less sinner in society.

“People enjoy our agonies and treat us like insects,” Butt said of herself and of the anonymous victim.

Butt is supervisor at the Khawaja Sara Society in Lahore and a member of the local “khawaja sara” or third-gender community. Pakistan added a third-gender option to national identity cards in 2009, but official recognition has not stopped discrimination against those who choose not to be identified as either male or female.

In the past six years, fewer than 10 percent of Pakistan’s estimated 1 million self-identifying khawaja saras have been issued new identity cards stating their preferred gender designation, according to the National Database & Registration Authority. Most khawaja saras are still listed as male, though, because they have failed to submit the documents necessary to enact a change.

“Being outcasts, our families will not provide documents proving when we were born,” said Aashaf, who also goes by Raakhee, after the famous Indian film actress Raakhee Gulzar. “Given the adverse situation, it is highly ridiculous to ask us to provide birth certificates and school certificates,” she said.

(Some khawaja saras interviewed for this story requested that their full names not be used.)

Some Muslim khawaja saras choose not to officially change their gender because doing so would make a pilgrimage to Mecca impossible. Saudi Arabia does not recognize a third gender.

A senior official at Pakistan’s National Database & Registration Authority who declined to be identified said the khawaja saras’ grievances are valid but that calls to address them fall on deaf ears among higher officials.

Official quotas call for 2 percent of government jobs (about 80,000) to be reserved for khawaja saras in Pakistan. Despite the system, only one of Pakistan’s four provinces has employed khawaja saras. 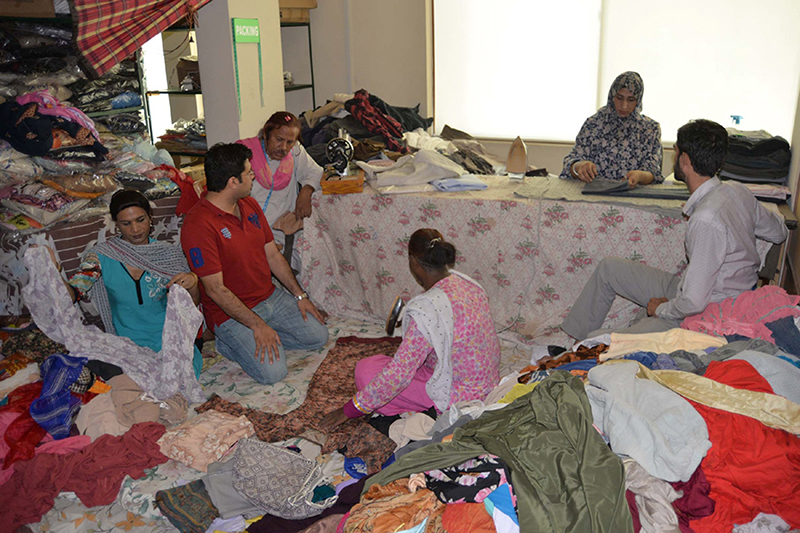 Riffee Khan is one of only three khawaja sara government employees in Sindh province, population 40 million. Khan says her fellow khawaja saras are undervalued by the state, their families and society at large.

In the past, khawaja saras often supported themselves as dancers and entertainers. As cultural practices have shifted, more have moved to the sex industry.

An estimated 80 percent of khawaja saras in Pakistan run their own prostitution businesses or are themselves sex workers. Lax safety measures have resulted in high HIV rates. Butt said that of the 100 khawaja saras her program recently screened, 95 were HIV-positive. 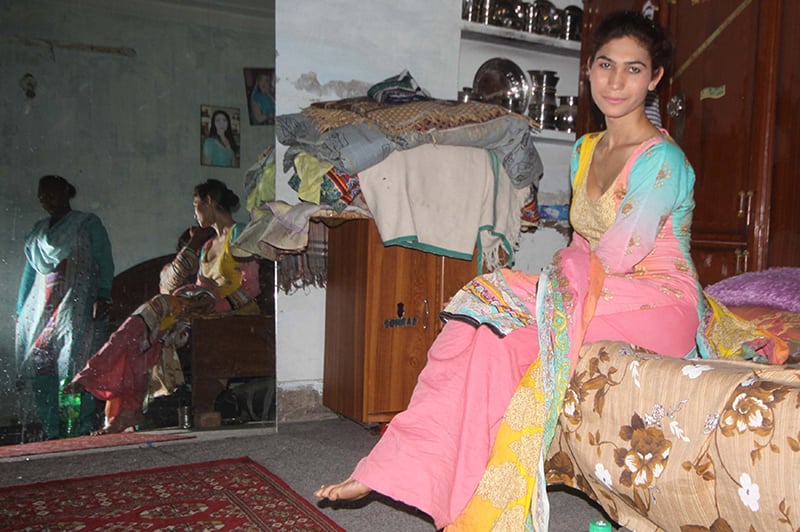 Javed, who also goes by Chandani, poses for a portrait in her living space. Religion News Service photo by Shahbaz Sindhu

“If the Supreme Court’s job placement quota system were actually implemented, we would be salvaged from this obnoxious sex business,” said Hina Jan, a sex worker in Lahore.

The Supreme Court’s 2009 decision recognizing gender changes also entitled khawaja saras to a legal share of family inheritance and the right to vote in elections, a move that emboldened some to run for political office in 2013. Five entered races, but all failed to clinch a seat.

Zahid Mahmood, a senior lawyer in Lahore, said he wasn’t surprised by the result, calling their official recognition a “mirage.” Members of the khawaja sara community are interviewed about their life ordeal. Religion News Service photo by Shahbaz Sindhu

“How could a community that is completely marginalized and considered religiously and socially taboo win an election?” he asked. “If minorities and women have reserved seats in parliament, why are khawaja saras not granted special quotas to end their political isolation?”

Liaqat Baloch, secretary general of the religious and political party Jamaat-e-Islami, said khawaja saras should enjoy constitutionally protected equal rights but would not address whether his party would reserve seats for khawaja saras in assemblies. Other major parties are opaque on the issue.

For Lahore’s many homeless khawaja saras, political aspirations normally take a back seat to finding basic shelter. Those who can afford housing often live together in small rented rooms. 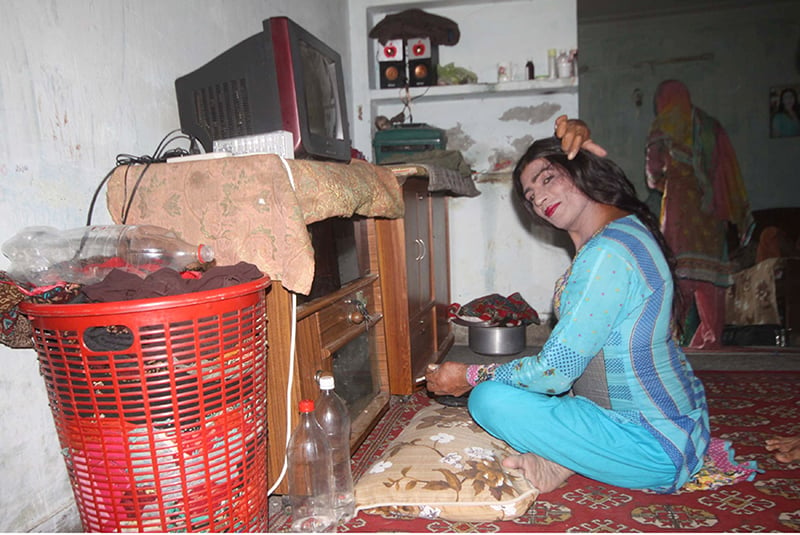 Rakha sits for a portrait after being interviewed in her living space. Religion News Service photo by Shahbaz Sindhu

“My aunt kicked me out when I stopped giving her money,” Faisal, who also goes by Rakha, said. “Now I’m always in search of shelter.”

Sabir, who also goes by Naila, shares a room with five other khawaja saras in the Kot Lakhpat area of Lahore. She said money is no guarantee that she and her friends will find housing.

“People abhor our presence in their neighborhoods,” she said.

By most accounts, houses of worship are no more accommodating. Muslim khawaja saras are usually prevented from praying in mosques — some say so as not to soil the holy environment of sacred places. Few if any spiritual leaders will visit the homes of khawaja saras to conduct religious functions or offer last rites to the dead.

Khawaja saras are also denied marriage rights, and crimes against them are often ignored. 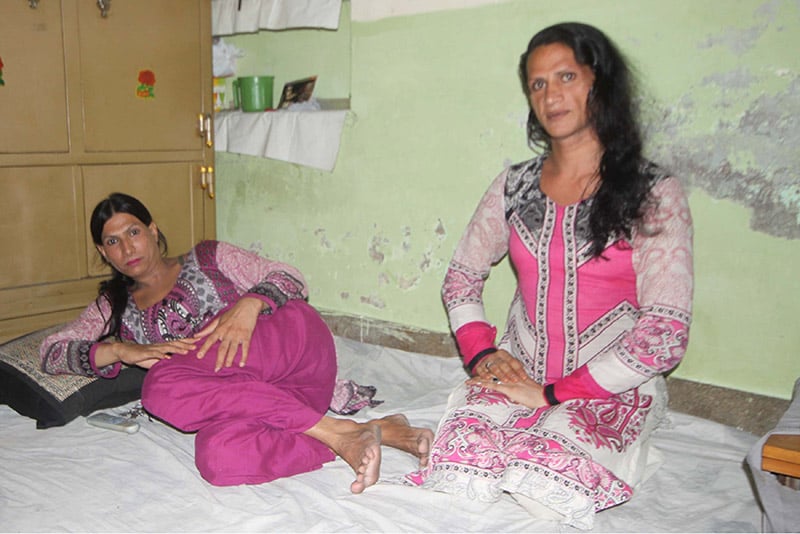 “Tania” and Ferdose Khan live as partners in Lahore’s khawaja sara community. Khan said her former partner was killed and the crime was not investigated. Religion News Service photo by Shahbaz Sindhu

“Justice never takes its course when a khawaja sara is murdered,” said Ferdose Khan, a khawaja sara. “When I went to the police station to register the brutal killing of my partner, my wounds were not healed. Instead, five senior policemen sexually assaulted me,” she said, crying.

When asked about the alleged 2014 incident, Nishtar Town Police Station House Officer Sabtain Ali said no such claims have been filed; he called them baseless allegations with a view to vilify police. “We take actions even against our own police officers if found guilty in any crime,” he said.

Although Supreme Court recognition has brought little immediate benefit to the khawaja saras, it has catalyzed several initiatives to protect their legal rights.

Akhuwat, a local nongovernmental organization, launched the Khawaja-Sara Rehabilitation Program where Butt is supervisor to empower the community, both socially and economically. The program has provided medical and financial assistance and successfully registered the genders of 302 khawaja saras, several of whom now work in a project-led clothing bank. Despite championing his group’s efforts, project director Nausher Khan said that real empowerment for the community will take big changes at the government and social levels, and at least another 20 years.