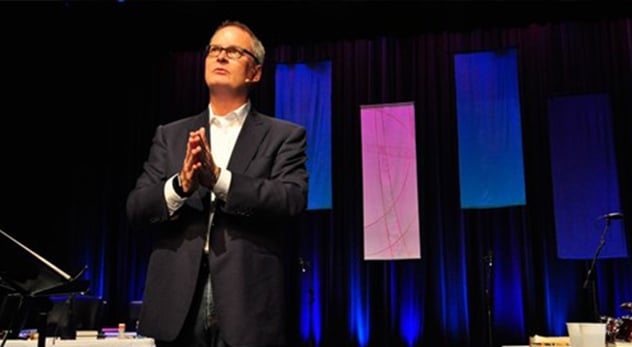 Pastor of America’s most influential mainline Protestant church wants Christians to give the Apostle Paul a second look. “Paul gives us an exemplar for the way in which God calls all believers to live,” he says. – Image courtesy of Adam Hamilton

Few figures in Christian history receive more mixed reviews than the Apostle Paul. Many conservative Christians (and particularly Calvinists) revere him and his writings; plenty of progressives dismiss him as arrogant and sexist. Now the pastor of America’s most influential mainline Protestant congregation has jumped into the debate. Surprisingly, he finds Paul to be “an exemplar for the way in which God calls all believers to live.”

Adam Hamilton is pastor of Church of the Resurrection, a United Methodist Church in Kansas boasting more than 10,000 weekly worshippers. While many other mainline Protestants are theologically and politically progressive–and even Hamilton himself recently penned a book on Bible interpretation considered by many to be left-leaning–Hamilton holds the Apostle Paul in high regard. His book, “The Call: The Life and Message of The Apostle Paul,” details his own journey to walk in Paul’s footsteps in Turkey, Greece, and Italy while distilling modern faith lessons from Paul’s ancient existence. Here we discuss his ideas and why they matter two millennia after Paul’s death.

RNS: You say that no other human, apart from Jesus, has had a greater impact on the world than Paul of Tarsus. But TIME Magazine placed him at #34, ranking Muhammed, Plato, Mozart, and Adolph Hitler above Paul. What do you see that they missed?

AH: I think most people, as TIME Magazine has done, underrate the impact of the Apostle Paul.  Paul had a greater influence on the development of Christian theology and faith than anyone but Jesus.  Most Christians, whether they realize it or not, understand the significance of Jesus through the interpretive lens of Paul.  Jesus left no writings, but Paul is credited with writing nearly half of the books in the New Testament. More people read Paul’s letters than read the writings of any other religious or philosophical figure in history. As Jesus’ primary interpreter, Paul has shaped the theology, spirituality and ethics of more than one third of the world’s population. His influence on our world far outpaces Hitler, Mozart and Plato (though Paul himself was influenced by Plato) and I would argue, by sheer numbers, Muhammed as well.

RNS: Your last book argued in places for a less literal reading of the Bible. How does this apply to your reading of Paul?

AH: There are places in the biblical text, particularly in the Old Testament, where I believe we are to read the Biblical stories by asking what the authors were intending to teach, rather than reading them as either a science textbook or a journalist’s article or historian’s account of precisely what happened. Genesis 1, for instance, is a powerful and beautiful creed, written in a poetic form, and likely used as a liturgy of sorts. It was not written as a science lesson on precisely how or when God created the universe. Instead, it is a fundamental affirmation that God is the source of all things, and God made all things well, and that human beings, both male and female, were created in God’s image.

I read Paul’s letters far more literally. Scholars debate whether all the letters attributed to Paul in the New Testament were actually written by him or if some might have been written by a follower of Paul drawing upon his thoughts. Regardless, in Paul’s letters we have, for the most part, letters Paul wrote to instruct and guide early believers. Most of these letters were written to address questions or problems among the Christian communities to whom he wrote (or the leaders who led them). I take Paul literally, but believe it is important that we understand what he wrote against the backdrop of the culture and times in which he lived.

RNS: Okay. Give us the cultural backdrop to Paul’s most prominent letters.

AH: Paul’s letters are largely pastoral responses to the challenges, questions and concerns of the communities to which he wrote. Paul was not just an apostle and evangelist. He also had a pastor’s heart. So he writes Galatians to counter the theology of the Jewish Christians who had followed him in the region of Galatia, teaching his converts that they needed to be circumcised, and idea he soundly rejects. His letter to the Philippians was a thank you note for an offering they’d sent to him while in prison, a letter pleading for two women in the church to be reconciled, and a word of encouragement to the community. Paul’s Corinthian letters were written to address multiple problems in the church, to answer specific questions the Corinthians had sent him, and to encourage their participation in an offering to the church at Jerusalem.

RNS: When many read these letters, they conclude Paul was sexist. What do you think?

AH: Some people have told me they think Paul was a male chauvinist pig. They’ll note how Paul had said women were to pray with their heads covered, keep silent in the church, to not teach men and to “submit” to their husbands. My response is to ask if they hate George Washington, Thomas Jefferson or Abraham Lincoln. These men held similar views to Paul’s concerning women, but we don’t hate them. We recognize they were men of their day and time. We appreciate the good they brought to us, but we refrain from judging them in everything by 21st century standards. If this is true of U.S. president who lived 150 to 235 years ago, how much more so of Paul who lived 1,900 years ago in the Greco-Roman world? [tweetable]In many ways, Paul was ahead of his time in how he viewed women. [/tweetable] But he was still a first century Jewish male and this, too, comes out in his writings.

RNS: You mention in his letters, Paul talks about the economic impact of people coming to faith. Can you explain this?

AH: First, Luke (Paul’s biographer in Acts) describes how Paul’s preaching led people to a fundamental change in their values. In the book, I describe several places where the decision to follow Jesus had a significant economic impact. In Philippi, a woman earned a living for her “owners” by fortune telling, but after coming in contact with Paul she was no longer able to tell fortunes after she was delivered of a spirit that gave her this ability. In Ephesus, people used to buy and sell little scrolls with incantations believed to provide cures for illnesses and deliverance from infertility. But Paul’s preaching had such an impact upon the people there that believers not only stopped buying these scrolls, they also burned the ones they had. Ultimately, Paul had to flee Ephesus when the silversmiths, for whom a significant amount of their income was derived from selling statues of the goddess Artemis, were angered by the drop in income.

[tweetable]Paul’s preaching actually hurt local businesses.[/tweetable] And in his letters, Paul called for his converts not to succumb to the idolatry of money. He urged them to find ways to use their resources to help others in need.

RNS: How can Paul’s letters can inform the way American Christians think about politics?

AH: The most important lessons Paul would teach us about politics are found in passages like Romans 12:1-3 which includes a call “not to think of yourself more highly than you ought to think,” or verses 9-10 of the same chapter, “Let love be genuine; hate what is evil, hold fast to what is good; love one another with mutual affection; outdo one another in showing honor.” Can you imagine how politics would be different if we all acted in this way? Every verse of Romans 12 should be required reading for all Christians engaging in political conversation.  I also think of Philippians 2:3, “Do nothing from selfish ambition or conceit, but in humility regard others as better than yourselves.” And of course there are the famous words he wrote to a deeply divided and contentious church found in 1 Corinthians 13 that begin with this statement, “If I speak in the tongues of mortals and of angels, but do not have love, I am a noisy gong or a clanging cymbal.”

RNS: How can studying Paul’s calling help modern believers discover their own?

AH: Paul regularly uses the language of “call” to describe the Christian life and his experience of it: “Paul, called to be an apostle of Christ Jesus by the will of God.” His dramatic conversion was a call to reject what he thought he knew about God and God’s will, and to follow Jesus.  As a Pharisee, he had sought to separate himself from sinners, particularly Gentiles. But following his conversion he was called to take the gospel to sinners, particularly Gentiles. His was a call to wait, to pray and ponder, and then a call to go to places he’d never been before.  He was called to speak up and speak out. He was called to risk, sacrifice and suffering.  In his personal spiritual life he was compelled to “live a life worthy of the calling” and he called others to do the same. Ultimately, he was called to die for his faith. Paul helps contemporary believers to discern God’s call on their lives, and Paul gives us an exemplar for the way in which God calls all believers to live.

On Faith and Culture
My own personal Jesus: Can he be trusted?