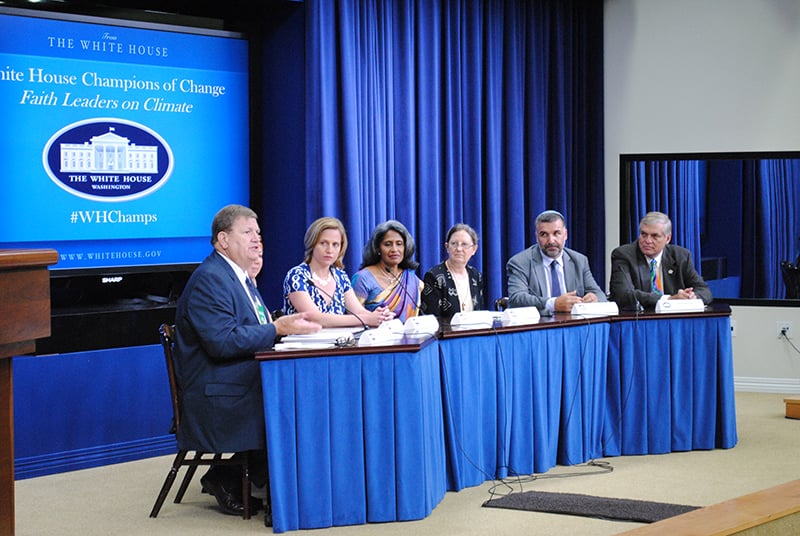 (RNS) From a zero-waste synagogue to global development work after natural disasters, environmental projects by faith leaders are being hailed by the Obama administration as examples of exemplary leadership on climate change.

Environmental Protection Agency Administrator Gina McCarthy highlighted initiatives by a dozen leaders from a range of faiths, who were recognized Monday (July 20) in Washington, D.C., as “Champions of Change” for their environmental initiatives.

“As faith leaders, no voice is really more important than yours in this,” said McCarthy. “As the president and others, including the pope, have indicated, this really is a moral responsibility. We need to remind people of that and engage them. It’s a responsibility that we all have to share, to protect our neighbors, to protect God’s creation from the threats of climate change and environmental degradation that is going to follow.”

The Rev. Al Sharpton, president of the National Action Network, told the 150 people gathered at the forum that the need to work on climate change extends across political parties and religious affiliations.

“If we are faith leaders of whatever faith, we have a moral obligation to not defile the Earth that God has given us,” he said.

The honorees included Catholic leaders, African-American clergy and four officials of Interfaith Power & Light, a nonprofit that helps congregations save energy and become more environmentally friendly. Here’s a sampling of the honorees and their projects:

Firman, of Riverside, Calif., coordinates Muslim outreach for OurVoices, a global faith and spiritual climate action network. She encouraged members of the Islamic Society of North America to take part in a Green Ramadan Initiative by reducing food waste and eliminating Styrofoam. She previously worked for the World Wildlife Fund in Indonesia and directed its recovery efforts after the earthquake and tsunami there in 2004.

Soloway is the spiritual leader of Congregation Bonai Shalom in Boulder, Colo., which became that city’s first zero-waste facility. He chairs the rabbinic advisory board of Hazon, a faith-based environmental organization, and is a board member of Ramah in the Rockies, a Jewish outdoor adventure camp. He helped create an interfaith community initiative to support locally grown food.

Lamb, of Silver Spring, Md., is chair of the steering committee for Young Evangelicals for Climate Action, a 3-year-old organization that has fellows on college campuses in the U.S. and the Democratic Republic of Congo. She has developed best practices for climate change adaptation in the Pacific Northwest and teaches at Au Sable Institute of Environmental Studies in Mancelona, Mich.

As a board member of Sadhana: Coalition of Progressive Hindus, Viswanath has encouraged Hindus to live out the principles of “ekatva” (oneness), “ahimsa” (nonviolence) and “sadhana” (faith in action) by caring for the environment. The Brooklyn, N.Y., resident has worked with women’s and human rights organizations for close to 30 years and is a co-founder of Women for Afghan Women.

More winners are listed on the White House website.