COVINGTON, Ky. — Rowan County’s clerk prayed and fasted over her decision to refuse marriage licenses for same-sex couples, she testified in federal court, and she said believes she is upholding her oath under the Constitution. 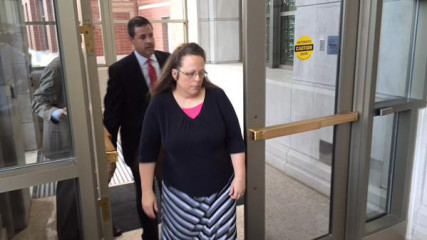 Clerk Kim Davis’ refusal to provide licenses has drawn wide attention after the U.S. Supreme Court ruled last month that marriage is a fundamental right for all couples. Kentucky Gov. Steve Beshear ordered clerks to comply with the decision.

“It wasn’t just a spur-of-the-moment decision,” Davis said. “It was thought out, and I sought God on it.”

On the stand Monday, Davis described herself as an Apostolic Christian who believes marriage is defined as the union of one man and one woman under the Bible — “God’s holy word” — and said she contemplated her policy for months.

She choked back tears at times as she argued that issuing licenses under her name would violate her religious beliefs even if a deputy clerk performs the task in her stead.

Monday’s testimony marked a second hearing in the case, and U.S. District Court Judge David Bunning said he expects to release a decision around Aug. 11. Meanwhile, Davis said she is denying licenses to all couples to avoid discriminating against those in same-sex relationships.

The American Civil Liberties Union sued on behalf of two same-sex couples and two opposite-sex couples, alleging that Davis violated their constitutional rights when refusing licenses. The couples, some of whom testified last week, argue that they live, work and pay taxes in Rowan County, a county of about 24,000 residents halfway between Lexington, Ky., and Huntington, W.Va., and shouldn’t have to drive elsewhere to obtain the paperwork.

If applied statewide, Davis’ reasoning would create chaos, allowing anyone to deny a license at any time based on personal religious beliefs, Daniel Canon, a lawyer working with the ACLU, said after the hearing. He called it an “unsustainable policy.”

“Why should the taxpaying citizens of Rowan County have to go anyplace else aside from their own county to get a marriage license?” he asked. “Why should they be held to a different standard than anybody else?”

READ: Can clerks refuse to issue same-sex marriage licenses? A guide to the legal debate

But lawyers from the Liberty Council, a religious freedom organization representing Davis, say people still can obtain licenses in surrounding counties, whose seats are less than 40 miles from Morehead, Ky., and that Davis’ First Amendment liberties protect her decision — even in public office.

Roger Gannam, a lawyer with the group, said the couples drove an hour to last week’s hearing in Ashland, Ky., and two hours to the hearing Monday in Covington and could have obtained a license in either place.

“This case is not about these plaintiffs’ desires to get married,” Gannam said. “The case is about the plaintiffs desire to force Kim Davis to approve and authorize their marriage in violation of her constitutionally protected religious beliefs.”

Public employees don’t have full First Amendment rights because those rights are balanced against their employer, the government, Ruthann Robson, distinguished professor of law at the City University of New York told The Washington Post in June.

During Monday’s hearing, Davis repeatedly cited religious rights under the First Amendment in her defense. She testified that she attends church “every time the doors are open” and performs a Bible study at a local jail once a week.

READ: Most states have majorities who favor same-sex marriage

After working in the clerk’s office for nearly 30 years, she said she never has denied a license on religious grounds or asked applicants about relationships she might find sinful.

Davis said she sent letters to lawmakers in January asking for legislation to protect clerks who have moral objections and had a meeting with employees over the policy. If Bunning orders Davis to issue licenses, she said she would deal with that when it comes but resigning is not an option because it would only leave the matter to her deputies.

Some county officials in Southern states — including Cleburne County Clerk Dana Guffey in Heber Springs, Ark.; Decatur County Clerk Gwen Pope and two others in Decaturville, Tenn.; and Rusk County Clerk Joyce Lewis-Kugle in Henderson, Texas — have resigned rather than issue licenses to same-sex couples. Alabama law says county probate judges in the state “may” issue marriage licenses, so some counties have ceased providing the service.

“If I resign, I solve nothing. It helps nobody,” Davis said.

Davis later testified that she still is following the Constitution because it protects expression of religion, and she noted that the Kentucky Constitution limited marriage to one man and one woman when she was elected. But under cross-examination, she struggled to answer questions about who has the final say in interpreting the Constitution, saying, “I’m not a lawyer.”

When asked if the Supreme Court holds final authority, she answered, “I suppose.”

Davis also said under questioning that she can’t speak for other clerks who might deny licenses for interracial couples or people who have been divorced.

Rowan County Judge-Executive Walter Blevins, who is authorized under state law to issue licenses if Davis is absent, was the only other witness Monday. He testified that while he believes in the traditional view of marriage, he would follow the law and provide licenses to same-sex couples.

Davis is among a number of clerks in Kentucky who have cited concerns over issuing licenses though most have continued providing them. Beshear’s office has received letters of concern from 10 clerks so far.

Though Beshear said he will not call a special session of the General Assembly, some lawmakers say they want to pass legislation that would allow couples to obtain licenses directly from the state or apply online. It’s unclear how Bunning’s ruling might affect other county clerks.

In neighboring Tennessee, some Republican lawmakers want the state to consider allowing employees who object to same-sex marriage to refuse to serve gay couples, but Gov. Bill Haslam also has given no indication that he will call a special session before lawmakers are due to return in January.

Canon said he could not discuss whether the ACLU has been approached by couples in other counties about more lawsuits.

Those on both sides of the issue demonstrated outside the courthouse Monday, waving signs in downtown Covington.

Kent Ostrander, executive director of the conservative Family Foundation of Kentucky, passed out a statement ahead of the hearing, arguing that Beshear needs to do his job and protect the religious liberties of clerks.

“The governor is not above the law,” he said. “To date, all he has done is press the issuance of the licenses and then sit back and let the ACLU sue the Rowan County clerk personally.”

But Michael Biel, a demonstrator from Morehead who was out in support of the couples, said Davis needs to do the job she was elected to do.