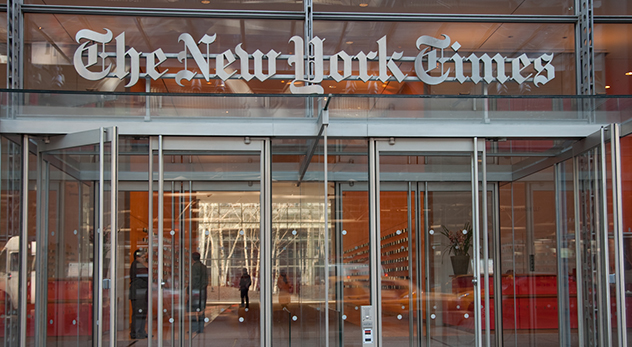 By sidestepping the elements of the story that have outraged Americans, it’s as if the editorial board is trying to prove the conservatives who claim their paper is run by left-leaning elitists are onto something. – Image courtesy of Scott Beale (http://bit.ly/1DvDX5R)

When The New York Times editorial board remained silent for an entire week amid a fierce Planned Parenthood controversy, I looked at my watch and assumed they must be out to lunch. Today, the historic newspaper’s editorial board published a response to the situation and proved that, yes, indeed they are.

In case you’ve been living under a rock, the fury started when an anti-abortion activist group, The Center for Medical Progress, released a nine-minute undercover video showing Planned Parenthood’s senior director of medical services flippantly discussing the practice of selling aborted baby parts. On Tuesday, a second video was released showing a similar situation with another doctor haggling over tissue prices. Both detail the gruesome procedures used to terminate a pregnancy and harvest organs from newly deceased babies.

Hundreds of thousands of Americans were outraged by the videos’ content. Prominent conservative politicians and religious leaders called for Planned Parenthood to be stripped of their federal funding, which led to the hashtag #DefundPP trending on social media.

But The New York Times editorial board, whose members are almost all pro-choice, decided that those who are providing the baby parts are the real victims. In a story titled “The Campaign of Deception Against Planned Parenthood,” they characterized the videos as nothing more than “the latest in a series of unrelenting attacks on Planned Parenthood.” By sidestepping the elements of this story that have outraged Americans, it’s as if the editorial board is trying to prove true the conservatives who claim that their paper is run by left-leaning elitists.

The thrust of the article’s argument is that it is perfectly legal for Planned Parenthood to offer “fetal tissue” from aborted babies for research. That may be true, and as more facts become available, we will likely discover whether these transactions are illegal “sales” or legal “donations.” But this is not the primary issue for the pro-life advocates I have spoken to. These conservatives are calling for defunding, not incarceration.

The central matter for pro-life Americans is not whether Planned Parenthood’s practices are legal, but whether they are just. There is often a difference. Many pro-life advocates, myself included, agree with the Times that “tissue donations” are “potentially lifesaving.” We are not opposed to organ donations outright. Our major objection is that the process by which these organs and tissues are collected and sold is unethical.

The Times also claimed the video was unreliable because it was “edited.” They are correct that the full video was nearly three hours long while the edited version was only nine minutes. So what? Comments made in the longer version do not invalidate those in the shorter. While the editorial board hopes to convince readers that The Center for Medical Progress was deliberately only telling part of the story, they fail to mention that the full video was also posted online and available. So who is withholding information here? And, by the way, the full video is just as repulsive as the shorter version. In fact, it’s about two hours and 50 minutes more repulsive.

Much of the Times’ focus was on an issue that is not critical to this discussion: how the videos were obtained. They are correct in claiming that the Center for Medical Progress also used deceptive practices to obtain the video. Yes, they set up a sham shell organization and lied about their intentions. But the way the videos were obtained do not alter the material in the videos themselves. So this objection is nothing more than a distraction from the real issue in this matter: the morality of selling aborted baby parts as if they were just another capitalistic commodity.

The most embarrassing part of the Times article, though, is not what they say but what they do not say. The editorial board totally ignores the most disturbing content in the videos. Actually, they ignore the content of the videos almost completely. None of the quotes at the center of the outrage are discussed.

The only fully forthcoming part of the article was when they assert that Planned Parenthood clinics provide many critical healthcare services such as pap smears, cancer screening, and contraception for millions of women each year. They are correct. Conservatives who cast Planned Parenthood as a morally bankrupt organization that contributes nothing of value to society are spinning a partial tale. In fact, many of Planned Parenthood’s services are indispensible to women’s reproductive health. Some, like contraception, actually prevent unplanned pregnancy and help decrease abortion rates.

As USA Today columnist Kirsten Powers argues, Planned Parenthood’s ghastly behavior and some liberals’ efforts to justify it proves that “society has gone off the rails.” She’s right. Society is going off the rails on this issue. And while much of America is trying to repair the tracks, The New York Times editorial board is seated in the dining car sipping flutes of Veuve Clicquot.

A society cannot fix what it will not acknowledge is broken.