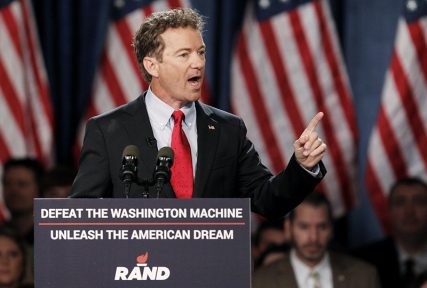 U.S. Senator Rand Paul (R-KY) formally announces his candidacy for president during an event in Louisville, Kentucky, April 7, 2015. Earlier on Tuesday, Paul initially announced his candidacy in a post on his website. Photo courtesy of REUTERS/John Sommers II
*Editors: This photo may only be republished with RNS-RANDPAUL-FAITH, originally transmitted on April 7, 2015.

(Reuters) Republican presidential candidates and lawmakers are calling for Planned Parenthood to be investigated and its federal funding eliminated after two videos that critics said showed the reproductive health care group is involved in the illegal sale of aborted fetal tissue.

White House hopeful Senator Rand Paul introduced an amendment to a highway bill Wednesday that would cut the nearly $500 million in taxpayer funding that goes annually to Planned Parenthood.

“Not one more taxpayer dollar should go to Planned Parenthood and I intend to make that goal a reality,” Paul said.

Republican Representative Diane Black introduced a bill on Tuesday that would place an immediate moratorium on all federal funding for one year while Congress investigates the group’s practices. Eighty lawmakers signed on as co-sponsors.

The videos show Planned Parenthood officials discussing ways to perform abortions to preserve fetal tissue for research and the costs involved. They were secretly recorded by anti-abortion group Center for Medical Progress.

Planned Parenthood says it does not profit from fetal tissue donation and only receives payment for associated costs, which is legally permissible.

“It just troubles me that you would sell body parts,” Politico quoted Jeb Bush, a leading candidate for the Republican nomination for the 2016 election, as saying.

“Congress has every right to investigate these abuses, because (Planned Parenthood) receives $500 million dollars from the federal government,” former Florida Governor Bush said during a visit to a crisis pregnancy center in South Carolina.

He stopped short of calling for the group’s funding to be cut but urged a review of federal spending, particularly of organizations with “a very deep political agenda.”

Two senior Republican lawmakers asked the Department of Justice to review how it enforces abortion regulations and detail actions it has taken to enforce the Partial-Birth Abortion Ban Act, a 2003 law that bans late-stage abortions.

Asked whether her department would open an investigation, U.S. Attorney General Loretta Lynch said: “At this point, we are going to review all the information and determine what steps, if any, to take at the appropriate time.”

Supporters of Planned Parenthood say the videos are the latest attack in a decades-long campaign against it. The organization focuses on family planning and pregnancy prevention, with abortions comprising 3 percent of its services, according to its website.

By Megan Cassella; Additional reporting by Lindsay Dunsmuir in Washington and Alana Wise in New York; Editing by Cynthia Osterman