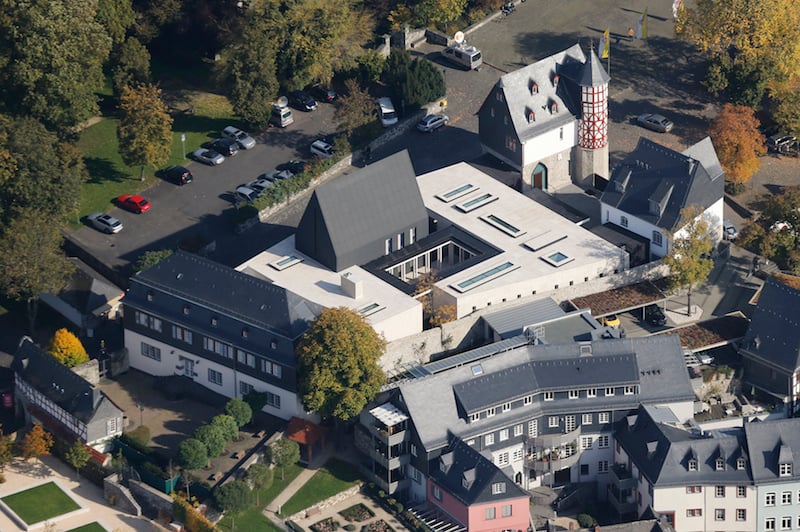 PARIS (RNS) A German Catholic diocese wants to take episcopal responsibility to a new level by making its disgraced former “bishop of bling” responsible for the 3.9 million euros ($4.9 million) in losses incurred during the luxury makeover of his residence and office.

Bishop Franz-Peter Tebartz-van Elst earned the “bling” label in 2013 when aides revealed he had spent 31 million euros ($34 million) — over six times the original estimate — on the stately complex opposite the Romanesque cathedral in Limburg, north of Frankfurt.

The Vatican banished him from the diocese several months later and, subsequently, quietly reassigned him to a low-profile post in the Roman Curia. He seemed to be going the way of other failed bishops, such as the few punished in the clerical sexual abuse scandals by being removed from their dioceses.

Any costs incurred in those abuse cases, such as compensation for victims, were left to the diocese to pay. Twelve U.S. dioceses overwhelmed by such claims have filed for bankruptcy protection. 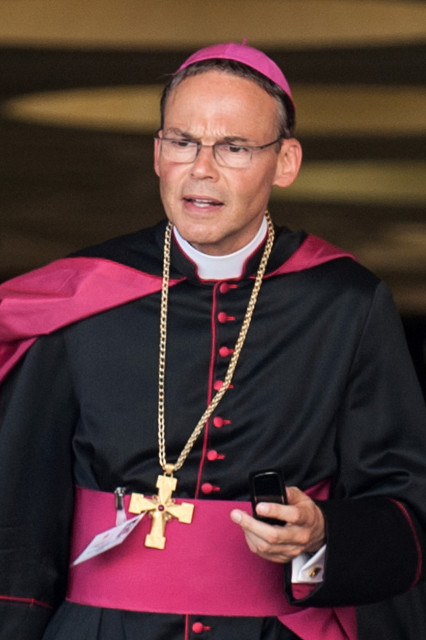 Bishop Franz-Peter Tebartz-van Elst of Limburg, Germany, leaves a meeting of the Synod of Bishops on the new evangelization at the Vatican on Oct. 19, 2012. Photo by Alessia Giuliani, courtesy of Catholic News Service

The Limburg diocese, which was kept in the dark while Tebartz-van Elst paid out millions from an off-the-books fund only he controlled, has discovered the losses in the building scandal and wants its money back. It is now in discussions with the Vatican to see if and how it can make him pay.

When it opened in June 2013, the diocese said the Saint Nicholas Diocesan Center had cost almost 10 million euros ($11 million) to build, about twice the original price.

The diocese’s finance officials, its priests council and lay leaders promptly demanded to see the bills and the media began uncovering details the secretive bishop could not explain.

It turned out no expense had been spared on restoring the center’s 16th-century “Old Vicarage” and erecting a stark new modernist building behind it. The complex boasted a private chapel that alone cost 2.9 million euros ($3.2 million) to build, a conference table worth 25,000 euros ($27,400) and a free-standing bathtub in the bishop’s residence with a price tag of 15,000 euros ($16,500).

After two months of uproar in parishes and the press, Pope Francis sent a senior Vatican diplomat to investigate the bishop, who clearly hadn’t understood the pope’s “poor church for the poor” message. Tebartz-van Elst was banished from his diocese that October. Only 53 at the time, he later resigned and, after several months out of sight, quietly re-emerged as an official in the Vatican’s Pontifical Council for Promoting New Evangelization.

Auxiliary Bishop Manfred Grothe, whom the Vatican appointed as an apostolic administrator for Limburg until a new bishop is chosen, has led a thorough investigation of the construction scandal and found the overall bill included 3.9 million euros of outright losses that had to be written off. Tebartz-van Elst ran up the bill by demanding late and costly changes, requiring earlier work to be scrapped, and ordering design studies that were not used.

“The apostolic administrator has raised canon law questions and the issue of material compensation in talks at the Vatican several times, the last being in April 2015. There will be another meeting on this topic in the autumn,” diocesan spokesman Stephan Schnelle said in a statement on Thursday.

“The decision about whether payment demands can be made of the bishop emeritus, including how much and how, can only be made in cooperation with the Vatican. In principle, the Holy See is responsible in cases of legal action against a bishop.”

Schnelle made clear that the Limburg diocese had kept the Vatican fully informed about its investigation and has not brought canon law charges against Tebartz-van Elst in a Vatican court. It was also still trying to establish the full extent of the losses written off.

The diocese was also reviewing the pension it pays its former bishop, Schnelle said, without commenting on media reports that Tebartz-van Elst received the sum of 7,000 euros ($7,700) a month from Limburg in addition to his monthly Vatican salary of about 3,000 euros ($3,300). “The pension agreement provides for an adjustment if a new salary is paid. The diocese is also discussing this with the Vatican,” he said.

Tebartz-van Elst, a strict conservative cleric who was fined for lying under oath about another scandal concerning a first-class flight he took to India, was able to spend so much money without supervision because he took most of it from a special unreported fund that many German bishops have at their disposal.

These reserves, known as the Bischoeflicher Stuhl (“bishop’s chair”), are diocesan nest eggs that are neither taxed nor mentioned in the annual financial reports where dioceses list how much they receive in revenues, donations and the special German church tax on parishioners.

Richer dioceses — usually in western Germany — have age-old properties, donations from former princely rulers and revenues from real estate investments tucked away in these funds that only the bishop and a few advisers have access to. Dioceses in the former communist eastern states have much less to fall back on.

Before the Limburg uproar, only two of Germany’s 27 dioceses had revealed how much wealth was hidden in their reserves. Many didn’t even have full records, or undervalued their holdings because they never had to report them. But under pressure from the “bling” scandal, they slowly began publishing reports of their overall wealth.

Cologne, long reputed to be Germany’s richest diocese, revealed in February 2015 an overall worth of 3.35 billion euros ($3.7 billion), more than the Vatican’s known wealth at the time. (New Vatican financial standards have since uncovered over 1 billion euros that were previously undeclared.) Its “bishop’s chair” held 166.2 million euros ($181.8 million) in 2012.