VATICAN CITY (RNS) The German churchman christened the “Bishop of Bling” for lavish expenditures he made on his residence and church offices has been given a low-level post at the Vatican, nearly a year after Pope Francis ousted him from the Limburg diocese. 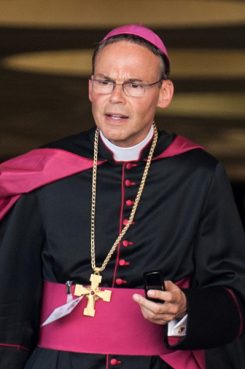 Bishop Franz-Peter Tebartz-van Elst of Limburg, Germany, leaves a meeting of the Synod of Bishops on the new evangelization at the Vatican on Oct. 19, 2012. Photo by Alessia Giuliani, courtesy of CNS

Bishop Franz-Peter Tebartz-van Elst will begin working next month as a “delegate” at the Pontifical Council for Promoting the New Evangelization, an office in the Roman Curia.

While the Vatican has so far declined to comment, Tebartz-van Elst will reportedly help prepare catechism, or religious instruction, materials — his area of expertise — for various national bishops’ conferences. But he won’t have his name attached to any documents, according to Archbishop Rino Fisichella, head of the council.

The post was created for Tebartz-van Elst and has the hallmarks of a “make-work” job because the Vatican couldn’t figure out what else to do with the prelate.

Controversy over Tebartz-van Elst’s residence in Limburg erupted in October 2013 when it was revealed that costs to renovate the diocesan center and the bishop’s home ran several times over the initial estimate, to some $40 million.

Tebartz-van Elst blamed the expense on a deputy who failed to keep track of cost overruns.

But it also emerged that the expenses from the refurbishment of the residence included $300,000 for an ornamental fish tank, $2.4 million for bronze window frames, and $240,000 for a spiral staircase. The bishop also had a freestanding bathtub, created by French designer Philippe Starck and featuring headrests at both ends, installed at a reported cost of about $20,000.

In addition, a month after the expenditures were first reported, Tebartz-van Elst paid a court-ordered fine of nearly $30,000 to avoid a perjury charge over his false claims that he did not fly first-class to India on a charity trip.

That all came just a few months after Francis was elected pope and began inveighing against churchmen who live like princes instead of leading humble lives marked by simplicity and service.

The Limburg situation quickly became an international sensation — some bishops in the U.S. faced scrutiny over their living arrangements — and in March last year Francis accepted the resignation of Tebartz-van Elst, now 55. At the time the Vatican said he “will be assigned a different position at an opportune time.”

But finding another post in Germany was challenging. As longtime Vatican watcher John Thavis wrote on his blog on Tuesday (Feb. 10), “parking problematic bishops in the Curia is a bit of a Vatican tradition.”

Thavis cited a number of cases when bishops were transferred out of their home country after becoming too controversial; another example is Cardinal Bernard Law, who in 2002 was forced to leave his job as archbishop of Boston following growing criticisms over his role in the clergy sex abuse scandal. Law was given a ceremonial post at a Roman basilica.

Tebartz-van Elst does have his supporters; one of them is reportedly Cardinal Gerhard Mueller, a German prelate who heads the Vatican’s influential Congregation for the Doctrine of the Faith.

Some also felt that Tebartz-van Elst had been targeted because he was more conservative than his predecessor in Limburg. They also noted that other bishops spent large sums on church projects and residences but had not been subjected to the same criticisms.

The Catholic Church in Germany, like other churches, is supported in large part by a state-mandated tax on churchgoers.