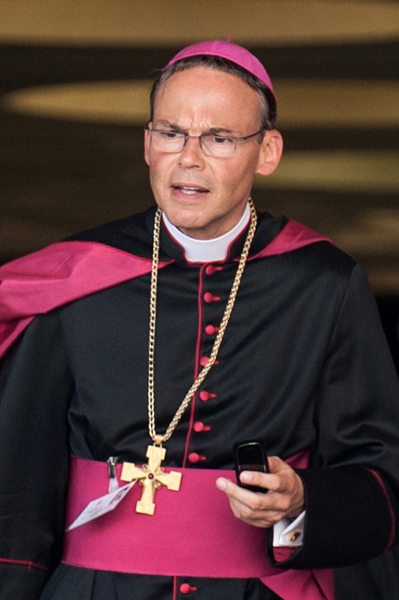 Bishop Franz-Peter Tebartz-van Elst of Limburg, Germany, leaves a meeting of the Synod of Bishops on the new evangelization at the Vatican on Oct. 19, 2012. Photo by Alessia Giuliani, courtesy of CNS

Tebartz-van Elst, 54, spent more than $40 million of church money renovating his home in Limburg, Germany. He became a worldwide phenomenon, in part because his lifestyle clashed so sharply with that of Francis, known for living in spartan and humble surroundings and for preaching restraint and austerity.

Vatican sources confirmed Tebartz-van Elst met with the pontiff at the Apostolic Palace in the Vatican. But there was no information about what the two men discussed or what conclusions were drawn.

Among the expenses from the refurbishment of the residence: $300,000 for an ornamental fish tank, $2.4 million on bronze window frames, and $240,000 on a spiral staircase. Tebartz-van Elst blamed the expense on a deputy who failed to keep track of cost overruns.

“As I am not an authority in the area of church management, as my qualification is in pastoral theory, I have to relinquish responsibility to (Vicar General Franz) Kaspar, who was the only person with an overarching view of the seat’s assets,” he said, according to The Washington Post.

Francis accepted Tebartz-van Elst’s resignation on Wednesday, saying the situation “impedes a fruitful exercise of the episcopal office.” The Vatican said the bishop would be reassigned at some future date.

It is not clear what he will do until then, or what will happen to his palatial former residence.