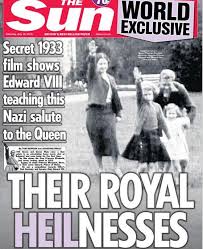 A 1933 image showing Queen Elizabeth as a girl giving the Nazi salute. The photo appeared in the British tabloid The Sun.
July 28, 2015
A. James Rudin

Joining in the grotesque gesture were her mother and Princess Margaret, Elizabeth’s sister. Teaching the salute is Elizabeth’s uncle, the prince of Wales, an acknowledged Nazi sympathizer and anti-Semite.

The provocative headline in the tabloid, The Sun, roared: “Their Royal Heilnesses,” a play on the infamous Nazi greeting of “Heil Hitler!”

The royal family is reportedly seeking to prosecute whoever leaked the film. Using the images as “evidence” that Elizabeth is an anti-Semite is a misrepresentation of history and deflects attention from the real anti-Semite in the home movie: Elizabeth’s uncle.

Defenders of the English monarchy note that the film was shot years before the radical evils of Nazism were fully known: “master race” nationalism, lethal anti-Semitism, the instigation of World War II and the horrific mass murders of millions now known as the Holocaust.

READ:  To some, Planned Parenthood is immoral; to others, it’s doing God’s work (COMMENTARY)

While the short film doesn’t make Elizabeth, who was just a child, an anti-Semite, it does remind us that in pre-World War II Britain, hatred of Jews and admiration of Nazism were rampant among many members of the nobility and aristocracy.

The girls’ uncle, who reigned in 1936 for a short for 11 months as King Edward VIII, was a foppish playboy who abdicated the throne to marry “the woman I love,” Wallis Simpson, his American-born mistress.

A 1933 image showing Queen Elizabeth as a girl giving the Nazi salute. The photo appeared in the British tabloid The Sun.

Elizabeth’s father, King George VI, succeeded his feckless brother. During the worst days of World War II, George, his wife and two daughters courageously remained in London. When George died in 1952, Elizabeth began her dutiful reign, which has lasted 63 years and on Sept. 10 will be the longest in English history.

But the prince of Wales was an open admirer of Adolf Hitler and Nazi Germany, and he was not alone. In 1933, many members of Britain’s ruling elites perceived Nazism as a bulwark against communism.

England’s upper crust feared that the established aristocratic order -- think “Downton Abbey” -- would be swept away. Many among the nobility trembled in their splendid homes and majestic palaces. A well-known anti-Semite of the era was the Virginia-born Lady Nancy Astor, a Tory member of Parliament.

Edward VIII applauded Hitler for suppressing communism and maintaining “law and order” in Germany. After he abdicated, Edward and his wife had a friendly meeting with Hitler at the dictator’s Bavarian mountain retreat. While in Germany, the British press reported, he offered the Nazi salute in earnest. The New York Times wrote: “He has lent himself, perhaps unconsciously but easily, to National Socialist propaganda.”

READ: To POTUS 45: How to win the white evangelicals

Anti-Semitism remained a recognizable and respectable component of “polite” British high society until the horrors of the Holocaust were revealed at the end of World War II. British troops were the first to liberate the Bergen-Belsen death camp in April 1945, just a month after Anne Frank died there of typhus.

British Prime Minister Winston Churchill, keenly aware of the former king’s pro-Nazi sympathies, dispatched the couple to sit out World War II to the Bahamas, where the vapid “Duke and Duchess of Windsor” could not harm Britain’s struggle against Nazism.

But members of the English ruling class were not the only ones tainted with anti-Semitism during the 1930s.

David Nasaw’s biography of Joseph P. Kennedy, “The Patriarch,” notes that as the U.S. ambassador to Britain in that era, Kennedy fell in with the aristocratic anti-Semites led by Astor. Nasaw writes that Kennedy voiced the old canard that the alleged Jewish media power would press America into a war with the Nazis.

When John Kennedy ran for president in 1960, his father’s hostile attitude toward Jews was a major obstacle JFK had to overcome in his campaign for the White House.

What’s in a home movie taken more than 80 years ago? A reminder of the anti-Jewish pathology that infected many pre-World War II political elites in both Britain and America.