(RNS) In an era when most faith groups’ political priorities align predictably with the two major parties, it is refreshing to behold a truly diverse religious consensus on an issue.

In response to widespread concern a generation ago about public safety and illicit drugs, new laws mandated longer prison sentences. Eager to appear “tough on crime,” legislators, prosecutors and judges all had incentives to contribute to the burgeoning prison population.

The budget-busting prison-industrial complex was politically popular for a time, but in the past decade the pendulum has begun swinging the other way. Harsh sentences, particularly for nonviolent drug offenders, created unsustainable fiscal pressures. States simply cannot afford to house more prisoners and pay the salaries and benefits of employees to supervise and care for them.

America’s denominations and faith organizations are calling for reform. Our vast criminal justice system emphasizes punishment over rehabilitation, while our faith traditions preach redemption. Citing Isaiah 61, Jesus announced that his gospel would include “release for the captives” (Luke 4:18). It seems wrong for a Christian conscience to support needless incarceration.

Catholics were early leaders in promoting restorative justice, the idea that communities must help ex-offenders re-enter society in healthy and productive ways. The U.S. Conference of Catholic Bishops issued a major pastoral statement in 2000 that placed criminal justice issues in the context of social ills, including family breakdown, violence, racial disparities and the perverse incentives of for-profit prisons.

Once a powerhouse in ecumenical Christian political influence, the National Council of Churches has reinvented itself as a smaller, more focused agency. Yet it has made mass incarceration its top advocacy priority.

NCC President Jim Winkler has a provocative idea. “If churches want to see revival,” he told me last year, “they should pick up released prisoners and help reintegrate them into their communities.” Criminal justice reform is not just an issue. It is essential to the gospel: Redeemed sinners proclaiming mercy in the name of Jesus Christ.

America’s largest mainline denomination, the United Methodist Church, has been particularly strong in its calls for prison reform and restorative justice. The UMC’s General Board of Church and Society has staff dedicated to teaching, organizing and advocacy on these issues.

Leaders from Catholic, mainline and black Protestant traditions have been sounding this refrain for years. But the growing consensus among white evangelicals and Republican officeholders may finally make sentencing reform an urgent and truly bipartisan imperative.

The National Association of Evangelicals, known to be more active on non-sex-related issues than other religious conservatives, has spoken strongly of the need for criminal justice reform. 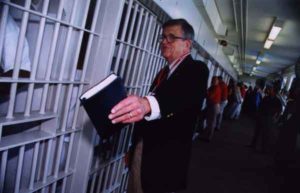 Evangelicals’ consciences are awakening on justice issues due to a recent spate of popular biographies of once-forgotten figures, such as William Wilberforce and Hannah More. Chuck Colson, the famed Watergate-felon-turned-prison-evangelist, helped make prison ministry a vital priority for evangelicals. Owen Strachan, a professor at Midwestern Baptist Theological Seminary in Kansas City, released a new Colson biography this week.

Until recently, disparate groups have worked on the issue largely independently. That is changing. In 2014, Congress appointed a committee to study the feasibility of reform among federal prison populations, whose growth threatens other federal law enforcement and funding priorities. The committee is called the Charles Colson Task Force on Federal Corrections.

Earlier this year, the task force sought input from faith leaders and saw unprecedented agreement across traditions and enthusiastic support for reform.

For decades, the primary religious debate over criminal justice focused on the death penalty. Capital punishment arouses visceral feelings, even though it affects few of us directly. Sentencing and prison policy is more easily seen as a boring bureaucratic issue. Even though millions are incarcerated, most Americans know zero or one person in prison.

Yet faith communities are adding urgency to the imperative for prison and sentencing reform, even as they remain divided on the death penalty (for now).

In the end, fiscal constraints will force changes in prisons and sentencing if moral concerns do not. It seems better to make these changes out of a warm-hearted, merciful impulse than through cold fiscal realities.

The faith community can credibly speak with one voice on criminal justice reform, and that voice must be heard.