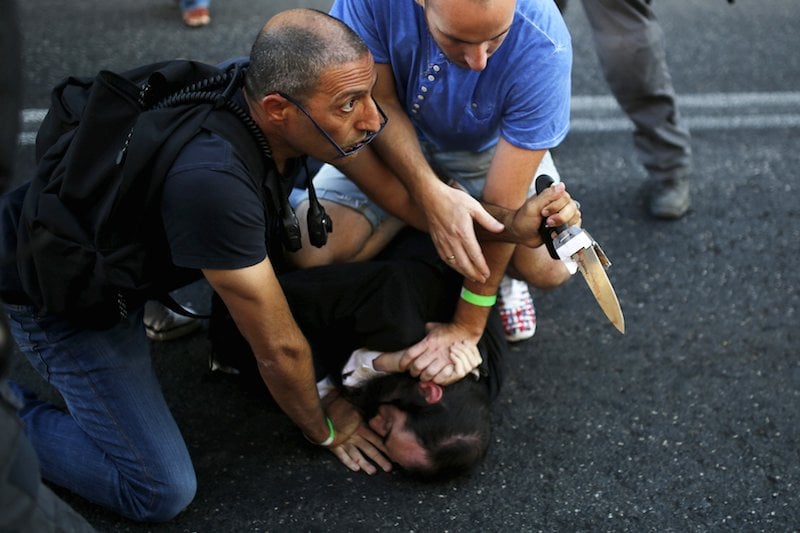 People disarm an Orthodox Jewish assailant after he stabbed and injured six participants at an annual gay pride parade in Jerusalem on Thursday, police and witnesses said.Photo by Amir Cohen courtesy of Reuters
July 30, 2015
Reuters

People disarm an Orthodox Jewish assailant after he stabbed and injured six participants at an annual gay pride parade in Jerusalem on Thursday, police and witnesses said.Photo by Amir Cohen courtesy of Reuters

JERUSALEM (Reuters) An ultra-Orthodox Jewish man stabbed and wounded six participants, two of them seriously, in the annual Gay Pride parade in Jerusalem on Thursday, with police saying the suspect was jailed for a similar attack 10 years ago.

About 5,000 people celebrating the event were marching along an avenue when a man jumped into the crowd, apparently from a supermarket, and plunged a knife into some of the participants, witnesses said.

"We heard people screaming, everyone ran for cover, and there were bloodied people on the ground," Shai Aviyor, a witness interviewed on Israel's Channel 2, said.

It was the worst attack in years on the event in Jerusalem, a divided city where the religious population is more prominent than in other parts of Israel and highlighted the tension nationwide among disparate social groups.

Police said they arrested the suspected perpetrator, an ultra-Orthodox man. Spokeswoman Luba Samri said he was the same assailant jailed for the stabbing of three marchers at a similar Jerusalem event in 2005. Israeli media said the suspect had been released from prison several weeks ago.

The parade has long been a focus of tension between Israel's predominantly secular majority and the ultra-Orthodox Jewish minority, who object to public displays of homosexuality.

Many devout Jews, Muslims and Christians criticize homosexuality as an abomination of their beliefs. Gay marriages performed inside Israel are not recognized by the authorities.

Police and medics said the attacker wounded six people. Two were taken to hospital in serious condition, including a young woman, said a doctor at Shaarei Tzedek Hospital, where the victims were being treated.

The march is held in the largely Jewish side of the divided city. Palestinians predominate in occupied East Jerusalem.

Oded Fried, the head of a leading gay rights group, said the attack would not deter the movement. A similar Gay Pride event on June 12 in the more gay friendly business hub of Tel Aviv passed off without incident.

"Our struggle for equality only intensifies in the face of such events," Fried said.

Netanyahu said Israel would prosecute those responsible to the full extent of the law, adding: "Freedom of individual choice is a basic value in Israel."

Rivlin, whose job as president is largely ceremonial, said: "We must not be deluded a lack of tolerance will lead us to disaster."