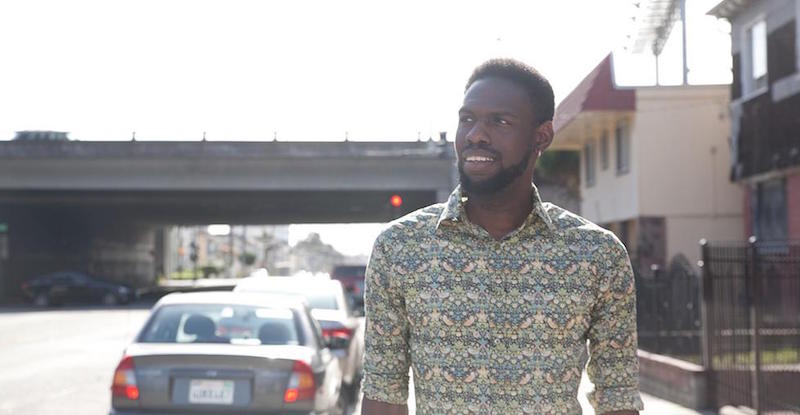 BERKELEY, Calif. (RNS) Three years ago, when Anthony Mordechai Tzvi Russell took the stage at a Jewish vaudeville celebration and said he was going to sing in Yiddish, people laughed.

As a 6-foot-plus African-American with one golden earring, he just didn’t look like the typical Jew fluent in the language of the pre-World War II shtetl.

Then he opened his mouth. Out came a rich bass voice in a longing lament to the isolated villages and tiny homes left behind in places like Poland and Russia.

Think “Fiddler on the Roof”‘s “Anatevka” sung by a guy who looks more like Chris Rock than Zero Mostel.

No one is laughing now. Russell performs Yiddish songs from New York to Florida, from Philadelphia to Los Angeles, to full houses and wide acclaim. On Sept. 6, he will sing at the Contemporary Jewish Museum in San Francisco.

“The potential for personal connection that performing in Yiddish provided was very attractive to me as a performer,” Russell said from his office at Netivot Shalom, a Conservative synagogue in Berkeley where he is an educator. A reprint of an old black-and-white photo of African-American children learning Hebrew letters is one of the few personal decorations he has added to the office’s white walls.

“Somehow, in the course of learning these songs, I found these narratives that allowed me to tell my own stories and audiences who enriched those narratives with the stories of their own lives,” he said.

Russell, 35, discovered Yiddish music through the Coen brothers’ film “A Serious Man,” which featured a song performed by Sidor Belarsky, Ukrainian-born Jewish singer who brought Yiddish songs to Carnegie Hall after World War II. He taught himself Belarsky’s repertoire, writing out the Yiddish lyrics, translating them and practicing his pronunciation.

Now he is at work on a new project called “Convergence,” a mix of the minor-key yearnings of Yiddish songs with the keening uplift of African-American spirituals. For him, the overlap is huge and resonant — both genres were born outside traditional religious spaces (the home and the plantation fields), both speak of oppression and hold fast to a faith that God will bring deliverance.

“Both exist in spite of oppression,” he said. “It is a miracle to me that both managed to survive.”

Turning to his computer, he calls up a sample song. The shuddering moan of the spiritual “Trouble so Hard” — made famous as a sample in a Moby song — blends with “Shteyt Oyf tsu Slichos,” a Yiddish lament about exile from Israel. Russell’s unaccompanied voice slides seamlessly between the two.

“When I heard that (the Yiddish song), I thought, ‘That’s the blues,” he said. “Both are saying, ‘Come to a house of prayer and we will deal with this.'”

Christa Whitney, who interviewed Russell for the Wexler Oral History Project at the Yiddish Book Center, said Russell’s work is part of a younger generation that is discovering and interpreting Yiddish for itself.

“I see Anthony’s work as an example of what happens when you put two musical styles in contact with each other; in that way it is presenting Yiddish to an audience that might not otherwise have been presented with it,” she said.

Reared a Baptist, Russell brings to the project the zeal of a convert. In 2007, he met the man who is now his husband, a rabbi, on a blind date and three years later converted to Judaism. It was not a difficult decision, he said.

READ:  The ‘Splainer: How do Jewish conversions work?

He sees those narratives in African-American spirituals, as well.

“African-American spirituals took on essentially Jewish texts to express their own lives,” he said, naming “Go, Down Moses” as an example. Both Jews and African-Americans have struggled with their pasts as slaves, using various musical interpretations of the same texts.

And both have something to say to contemporary listeners, especially post-Ferguson, Russell said. The ongoing deaths of black people at the hands of law enforcement officers and the resulting “Black Lives Matter” movement has made him feel a special urgency to get his music to a broader audience.

“I feel like I need to get music out there that is inspirational and coming out of the struggle of black people to live and thrive in their own country without being persecuted,” he said.

Another turn to the computer and another example — a mix of the civil rights anthem “Lift Every Voice and Sing” and “Hof un Gloyb,” a Yiddish labor song.

“Both are all about these rhapsodic visions of what the future can be and the triumph of that over generations of death,” he said. “Our history has been horrible, so we are saying ‘Let us lift our voices and find a space where we can move on without forgetting the kinds of things we came from.'”

Yiddish is experiencing something of a revival. There are now Yiddish immersion summer camps, synagogue-based Yiddish discussion groups, Yiddish newspapers and multiple Yiddish radio stations worldwide. Russell is part of that revival and said he has found the newly thriving Yiddish community to be particularly welcoming to him as a gay, African-American convert.

“There is just this instant connection with people that bridges any number of superficial differences,” he said. “People see that I am putting the heart and soul of an African-American man into the music and they are responding to that.”