BLOOMFIELD, Conn. (RNS) Friends of Yiddish has no agenda. No textbooks. No Yiddish grammar rules. 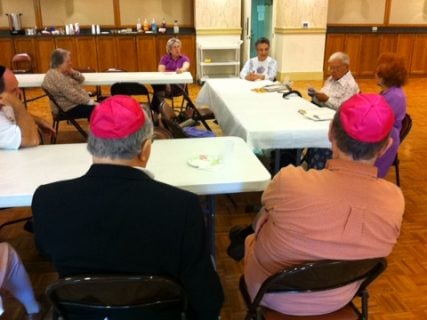 Friends of Yiddish meet every month at the Binai Tikovh-Sholom synagogue in Bloomfield, Conn. to practice a dying language. Photo by Ann Marie Somma/Hartford FAVS

Its members gather every month at the B’nai Tikvoh-Sholom synagogue to speak a language stamped in their hearts and memories. They savor their past through Yiddish words and phrases spoken by their parents and grandparents. In the process, they are keeping a dying language alive.

“It takes you back to the old days and it takes me back to my youth,” said Gloria Bein, 92, who recently shared a Yiddish text with group members at the Bloomfield synagogue.

Group leader Alexander Cohen, 95, said group members, many in their 80s and 90s, like to share stories and memories, and learn a new Yiddish word or two.

“It’s a nostalgic get-together with mostly old people coming to renew their memories from when they were kids,” said Cohen, whose parents immigrated to the United States from Lithuania.

But while many older Americans gather to reminisce about parents and grandparents who spoke the Germanic-Hebrew language of Eastern and Central European Jews, a renewed interest in Yiddish is blooming among a younger generation of people who have no such memories.

Much of the renewed interest grows out of university programs in Jewish studies that now offer Yiddish language and literature courses. This summer also saw a flourishing of intensive language courses and camps:

The numbers are certainly small, but the enthusiasm is high.

Rabbi Shlomo Shulman, who teaches Yiddish at the Jewish Federation of Western Connecticut, said his classes fill up quickly.

Shulman introduces his students to Yiddish poetry, music, and literature that offer a window into Jewish traditional life.

“There is an amazing culture surrounding Yiddish speakers,” he said. “They were people who were very poor and oppressed, who had everything going against them but they found a way to appreciate the good in the lives, their spiritual life, and their family,” he said.

For centuries, Yiddish was widely spoken by an estimated 11 to 13 million Jews throughout Europe. But the number of Yiddish speakers began dwindling with the Holocaust and the Soviet persecution. A Germanic language written in the Hebrew alphabet, Yiddish was also the victim of the assimilation of Jews who immigrated to new countries and left their old language behind.

When Israel rejected the language over Hebrew many believed it had been dealt its final blow. Today, an estimated 1 million speak the language, many within the Orthodox community.

But Aaron Lansky, founder of the Yiddish Book Center in Amherst, Mass., is not surprised by its revival, especially among younger Jews who see it as a connection to their cultural heritage.

In the 1980s, when Lansky’s nonprofit book center began saving and translating Yiddish books destined for the trash bins, he never doubted the language would experience a renaissance.

“I thought it would happen, but not so soon,” he said.

For many younger people, the resurgence grows out of a cultural and historic interest.

“My feeling is that Yiddish is going to be an academic subject,” he said.

But others say the ranks of Orthodox Jews, and particularly Hasidic groups such as the Chabad-Lubavitch movement, which has embraced Yiddish and is growing worldwide, will keep the language alive.

One thing is clear, Bers said. “Yiddish needs all the users and protectors that it can get.”